New Canaan in 2014 saw what experts are calling a record number of condominiums and cooperatives sold, and those that came in at above-asking price increased ninefold over the prior year.

In 2014, New Canaan saw 79 condos sold (the figure includes 10 non-MLS sales)—a 25 percent increase from the prior year, according to a local Realtor who’s been tracking MLS and non-MLS sales data since 1989. 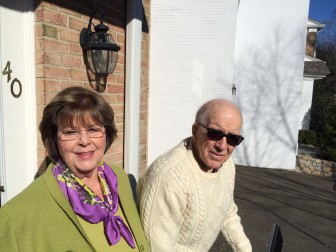 Jeanne Rozel, a Realtor with Halstead Property in New Canaan, sold two condos at above asking price in 2014. Here she is with her brother-in-law Bill Malone, who also found a new home in 2014 at Cobbler’s Green, with Rozel’s help. Credit: Michael Dinan

And among those 79 units, nine were sold above asking price, compared to just one in 2013, said Jeanne Rozel of Halstead Property, a New Canaan resident for 40 years.

They’re statistics that Rozel said “shocked” her when she compiled the data.

“I can’t figure this out,” Rozel said. “First of all, to have so many sold is very unusual, and right now we only have 13 or so listings of condos, so that is also very unusual, for inventory to be that low. We just finished a year with the highest sales that I’ve ever seen, and in that year nine were above asking price. I’ve never seen that happen.”

Here’s a table with the data Rozel accumulated, article continues below:

New Canaan has about 850 condo units, Rozel said, and in 2014 sales of condominiums (and co-ops) represented about 20 percent of all home sales in town.

Laura Costigan of Berkshire Hathaway HomeServices New England Properties said New Canaan is deceiving in the sheer number of condos located here, and that units are so coveted that they often are sold before they even go on the market.

“Many deals happen and you never get a notice, because someone finds out in the complex [that a unit is available] and word gets out and a lot gets done without going to the MLS,” Costigan said.

More New Canaanites are downsizing as they age and opting to stay local rather than move to, say, Florida, Costigan said.

Robert Blosio, a New Canaan resident and Realtor with William Pitt Sotheby’s International Realty, said one key to understanding the numbers in New Canaan is that residents of towns such as Darien or Bedford, N.Y. seeking to remain in the area often find themselves looking at condominiums here.

“None of those towns have got as many condos as New Canaan does,” Blosio said. “So they all come here because it’s the same, quaint town as what they’re used to.”

Additionally, Blosio said, builders in increasing numbers have seen that they can turn a profit by buying a multifamily property and then building two units of new construction on it—often “in town.”

And that’s important, because not all of those who come to New Canaan seeking condos are downsizing, said Arnold Karp of Karp Associates.

“We have people coming to town that want to enjoy New Canaan and they’re realizing they don’t need big lawns and swimming pools and some of the other things afforded in larger zoning areas, but also like the concept of ‘close the door and they can leave,’ which condo life represents to them,” Karp said.

He added that there’s a shortage of rental options in New Canaan that’s driving sales of condominiums.

“If you are coming to town, there is not a wide variation of housing stock, so some people are buying and others are saying they’ll start out in a condo since there are no rentals right now that are really available,” Karp said.

Whatever is fueling the surge in condo activity, the 2014 figure of 79 units sold is more than Rozel can recall recording. One year hit 75, she said, then dropped to 65 and generally falls in the 40 to 50 range. Rozel herself sold two condos above asking prices in 2014 and called the nine overall last year “totally unusual.”(She also recalls that 2007 was an anomaly in that, though there weren’t many sales, many of the condos that did sell went at high prices, more than $1.5 million.)

Non-MLS condo sales—typically direct sales, though there often is a Realtor around even in those cases, Rozel said—stood at 10 in 2014, compared to 16 in 2013 (to go with 47 MLS condo sales that year, for a total of 63).

Two or three condo sales in 2014 were short sales, and in one case a Realtor who owned a Leefair condo sold it for $1,950,000—a “very significant sale,” Rozel said.

In 2014, the top four MLS condo sales in New Canaan were all Halstead, Rozel said: Susan O’Rourke and Bettina Hegel, both on Richmond Hill Road, The Sneddon Team at Ardsley Square and Mary Higgins at Jelliff Mill Falls.

“I have no clue what’s happening, except maybe we’re heading for something good for condominiums,” Rozel said.