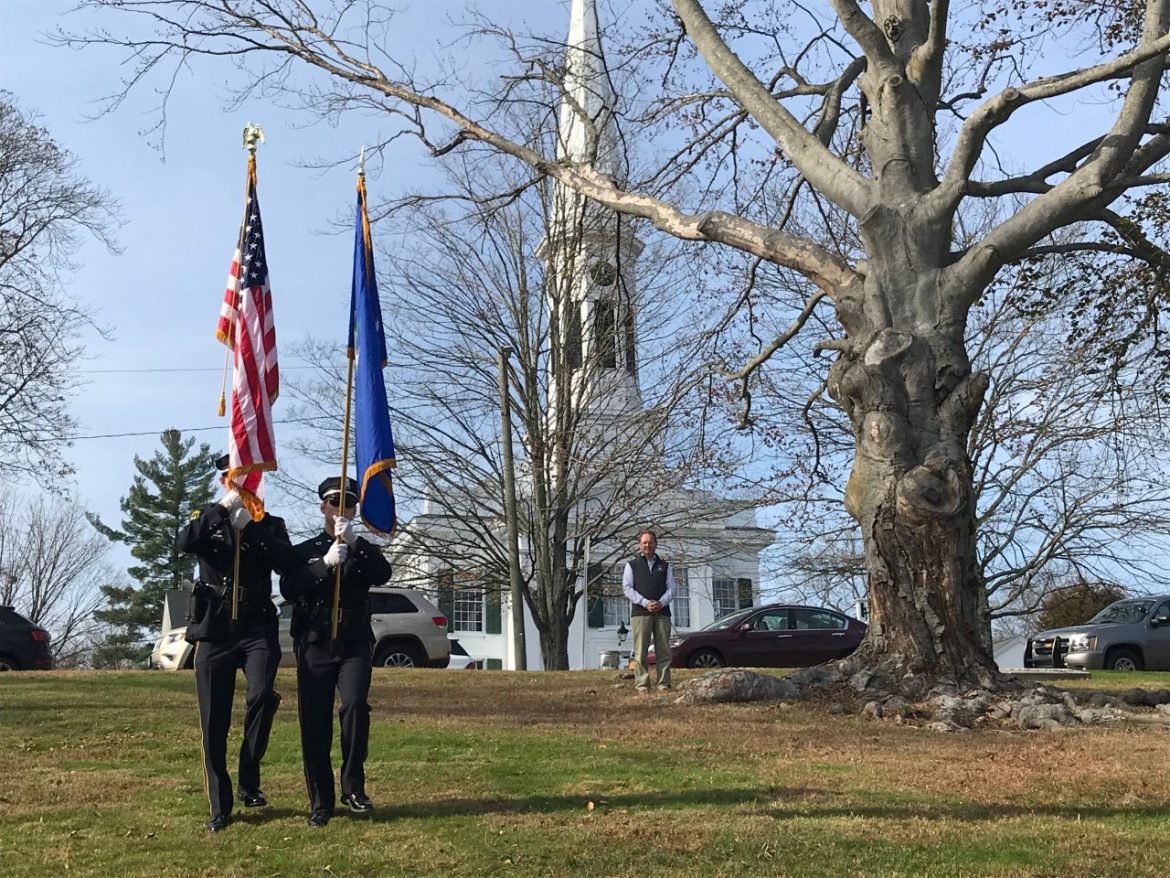 A dispute dating back to September between the Congregational Church of New Canaan and the town’s highest elected official regarding ownership of God’s Acre is expected to continue through the summer, according to the church’s pastor.

In a letter sent Friday to the congregation, the Rev. Chapin Garner said the church’s attorney and trustees “will continue to engage the town in deliberation over our First Selectman [Kevin Moynihan]’s assertion that the Town of New Canaan owns God’s Acre.”

“In the past few weeks, we have shared a fair amount of documentation about God’s Acre history with our town officials in response to a commitment from all our Selectmen to approach the issue with open minds and genuine interest in understanding our history and the history of our ancient burial ground across the street from our Meeting House,” the letter said. “Additionally, I recognize that many of our church members and friends may not know the original purpose, or our church’s stewardship, of God’s Acre that dates back to 1736. Five years after the founding of ‘Canaan Parish’ and sixty-five years before the incorporation of the Town of New Canaan.”

Garner, who is to go on sabbatical May 1, called the God’s Acre dispute an “important issue that has yet to be resolved that will require continued conversation throughout the summer.”

A citizen-led effort to create the terrace launched in early-2019, when the committee formed to create a year-round gathering space at the top of God’s Acre where the Town Band also could set up each Dec. 24. The committee said at the time that caroling could be in jeopardy because the Hersam family, which for years had given money to support the bandstand’s assembly, pulled out after selling its weekly newspaper to Hearst Corporation.

The approximately 18-by-36-foot patio was to be include walls wide enough to sit on, a retaining wall lined with boulders and plantings and granite plaque with an inscription noting the important location of God’s Acre.

A volunteer committee introduced plans for a permanent flagstone terrace atop God’s Acre in March 2019, appearing before the Historic District Commission. The Board of Finance and Town Council approved the project six months later.

To be funded entirely by private donations, the committee’s goal was to raise $100,000—half of that to pay for construction and the balance for future upkeep. The committee was more than halfway toward its goal when, last September, it put the plans on “pause” in the face of the church’s assertion that it has legal rights to the property as its own church cemetery.

Moynihan called for the question of who owns God’s Acre to be resolved and has spent more than $41,000 in legal fees on the matter, driving the town’s legal spending over budget.

Garner in his sourced and footnoted letter said church and New Canaan Historical Society archives show that the parcel known as God’s Acre dates back “nearly to the founding of Canaan Parish.” (Canaan Parish was settled in 1731 and New Canaan was incorporated in 1801.)

“As a Christian, a pastor of our church, and a proud resident of New Canaan, it is a delight to know that our town sings carols of our Christian faith over the resting place of so many of the original saints of our church every Christmas Eve,” Garner said in the letter.

He continued, “As you have no doubt heard me reference before, the location of our church and the old burial ground referred to as ‘God’s Acre’ was selected primarily for theological reasons. Our Congregational ancestors who founded our town chose this hill for our church and cemetery because each morning God’s Acre is wonderfully illuminated by the rising sun. The sun is an important symbolic and daily reminder for our members, past and present, of the rising of God’s Son, and the Easter promise of resurrection. The hill was the ideal location to inter the remains and remember the lives of the faithfully departed of our community.”

The earliest records burial on God’s Acre hill was that of the first pastor’s wife, Anna Beard Eells, in 1736, Garner said.

“In 1773, the church wanted to formally extend its burial ground to the base of the hill, and thus, it was decided that our church seek to acquire the triangle of property directly across from our Meeting House,” Garner said in the letter. “Historical Society documents indicate that there was some confusion as to the rightful owner of the parcel at the time, due to property transfers that had already taken place since the Parish’s founding in 1731. To this end, Captain Samuel Hanford, a leading member of our church, went to the Proprietors of Norwalk for approval of the purchase. There is a notation in the Proprietors Book in Norwalk in 1773 citing that Hanford was seeking ‘an addition to the burying-place at Canaan.’ ”

“The Proprietor’s vote reads as follows: ‘Granted to the inhabitance of Canaan Parish the sum of sixty shillings, New York money, towards an addition to their burial place.’ A deed was shortly drawn up on behalf of the two most likely owners of the triangular property—William Boult and Johnathan Husted—and it was granted to the Proprietors of the Canaan Parish for the sum previously agreed upon with the Norwalk Proprietors. The cemetery was in continual use until it reached capacity with the burial of Mary Hanford in 1857.”

The headstones on the hill were removed somewhere in the 1870s or 1880s, garner said, and the “prevailing belief is that our ancient burial ground had become overgrown, and in an effort of civic pride around our Nation’s Centennial, the community cleaned up the hill and relocated the headstones to Parade Hill, and then Lakeview Cemetery, where many of the headstones reside to this day.”

“There are no records of any human remains being relocated at that time, which, according to State Archeologist Dr. Sarah Sportman, was not an uncommon practice in the 1800’s in New England,” Garner said in the letter. “A 1925 Connecticut Superior Court case involving the mishandling of these stones at the Parade Hill Cemetery, states that the stones were moved from God’s Acre years before without relocating the graves themselves.”

In 1908, “in an effort to re-mark the hill as a church cemetery, The Congregational Church of New Canaan placed a stone marker embossed with ‘God’s Acre’ near the top of the hill,” Garner said.

Garner said that as church pastor he has “loved witnessing and participating in the numerous church and civic events that take place on our sacred hill.”

“Caroling on God’s Acre, Memorial and Veterans Day services of remembrance, the lighting of the Menorah for Hanukkah, and the placing of the Cross during Lent through Eastertide are all beloved traditions in our town and church community,” he said. “I am confident that our church’s many pastors and parishioners buried on that hill would take great joy in the central and very special place God’s Acre has in our town and in our hearts. And, with every new sunrise, we are reminded of their lives, their memory, and the Easter promise of resurrection we all hold dear.”

2 thoughts on “Congregational Church: Dispute with Town Regarding Ownership of God’s Acre To Continue through Summer”