New Canaan’s highest elected official said last week that the town government is working toward a “hybrid” approach to public meetings that will allow people to continue attending via videoconference if they choose. 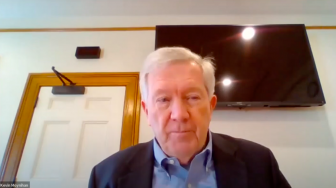 First Selectman Kevin Moynihan during the April 6, 2021 Board of Selectmen meeting. Zoom screenshot

The town has been “working with IT” to plan for a combination of in-person and remote meeting attendance, according to First Selectman Kevin Moynihan.

“The hybrid approach, under the governor’s executive order, requires that a limited number of members of the public including media are allowed to attend,” Moynihan said during the Board of Selectmen’s April 6 meeting, itself held via videoconference. “We are trying to figure out how to do that. But hopefully or possibly at our next meeting in two weeks we will begin to do that.”

He spoke during a section of the meeting dedicated to general matters before the town, and in response to a question from Selectman Kathleen Corbet. She asked for an update on Moynihan’s plan to have the selectmen meet in person.

“Officials conducting hybrid meetings shall make provisions to allow at least some members of the public and press to attend in the same location as the officials conducting the meeting in a manner consistent with public health guidance for limiting the transmission of COVID-19,” Lamont’s order said. “Municipal bodies conducting in-person or hybrid meetings shall consult with and take steps recommended by local or state public health officials to conduct such meetings in a manner that significantly reduces the risk of transmission of COVID-19. Remote and hybrid meetings shall proceed in a manner as closely consistent with the applicable statutes, special acts, town charters, municipal ordinances, resolutions or procedures as possible, and in compliance with the open meeting provisions set forth in the Freedom of Information Act.”

Lamont in February extended executive orders related to the public health emergency until April 20. That’s also the date of the Board of Selectmen’s next scheduled meeting.

The town has conducted public meetings via Zoom since the pandemic set in more than one year ago. The last fully in-person meeting of a public body held at Town Hall was the March 11, 2020 meeting of the Technology Advisory Committee—held in a first-floor conference room hours after district officials announced that New Canaan Public Schools would start remote learning in the wake of the first confirmed case of COVID-19 in town. Within days, indoor dining was prohibited and places where people gathered such as gyms, playgrounds and the movie theater were closed.

Technology Advisory Committee members referred briefly to coronavirus disease at the time, saying the town likely will want to post a COVID-19-related alert on the municipal website with a sign-up link in order to help build a database of local email addresses.

According to the latest data from the state Department of Public Health, New Canaan has had 1,270 cumulative cases of COVID-19, 119 likely cases and 40 deaths.