A sign warning visitors to “Be alert” because “Coyotes are active in this area” has been installed at the main entrance to the cornfields at Waveny, and additional signs are to be posted elsewhere in New Canaan parks, officials said. 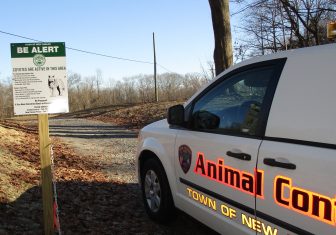 The new coyote sign outside the cornfields at Waveny, an area that the Waveny Park Conservancy is converting into ‘Waveny Meadows.’ Those power lines are to be re-routed.

With tips on what to do if approached by a coyote and how to protect pets, as well as police contact information for those worried about an encounter, the signs are designed to help educate park-goers, according to Officer Allyson Halm, head of the New Canaan Police Department’s Animal Control section.

“I have people walk up to me at Waveny on a regular basis, surprised at what they had just seen,” Halm said. “To me, we can’t educate enough. I don’t want anybody to come up and say, ‘I didn’t know. Nobody told me.’ ”

The signs say that those approached by coyotes shouldn’t run or turn back but “be as big and loud as possible,” waving arms and throwing objects. Pets should be kept on a short leash and extra caution should be exercised from dusk to dawn, according to the signs.

Additional signs will be installed at Kiwanis Park and Bristow Bird Sanctuary, as well as along a trail at Waveny that runs near the compost area off of Lapham Road, Halm said.

The cornfields at Waveny—to be renamed ‘Waveny Meadows’ following a major project there from the Waveny Park Conservancy—are at this stage, with the area cleared out, a “perfect hunting ground” for coyotes who can hunt prey such as squirrels that have no way of escaping up trees, Halm said.

Coyote sightings typically increase in the spring, when the animals den and pups are born.