A New Canaan woman who made headlines last fall for her unabashed violation of the town’s leash law at Waveny on Tuesday was fined $272 for running two dogs at Kiwanis Park, officials said. The $136 ticket for having an off-leash dog in a park—a violation of local ordinances—includes a $90 fine and $46 in state processing fees.

The town’s 9/11 Remembrance Ceremony is to be held on the front lawn of Town Hall on Monday, Sept. 11. The community will start to gather at 9:30 a.m. with a ceremony that officially starts at 9:59 a.m.

Town officials on Aug. 31 issued an after-the-fact permit for $50,000 in work that had already been done at an Elm Street home. The 1997-built house at 313 Elm St. got a finished lower level—a finished basement of about 1,000 square feet with three rooms added, as well as one full bathroom, according to the permit. The work was done by Trumbull-based N&M Construction. Part of the permit said: “Kindly note that all the above work was done without obtaining the necessary permits this means that all required inspections during construction were not performed.”

The New Canaan Democrats’ annual BBQ—a chance to meet fellow Dems, including candidates for local office—is to be held 1 to 4 p.m. on Sunday, Sept. 10 at Kiwanis Park. U.S. Sens. Jim Himes and Chris Murphy are expected to stop by. 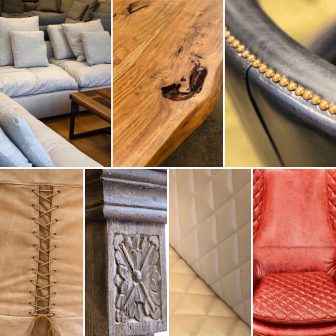 The new pop-up furniture store at 70 Main St. (formerly Jos. A. Bank) features a limited inventory of designer Italian linen, Italian leather and solid wood furnishings. Owner Hassan Dabbous of Z&J International launched this first retail location to help his freight forwarder and friend of 30 years recoup the cost of three containers of furniture when a high-end designer went out of business. Dabbous has been sourcing products, packaging and advertising specialties directly from factories for over 25 years.

An Avalon Drive East resident, accused by her landlord of failing to pay for the very first month of rent in July ($3,355), on Aug. 25 answered an eviction action by saying she had, in fact, paid all rent owed. On Thursday, Avalon Bay Communities Inc. withdrew the eviction.

Visiting Nurse & Hospice of Fairfield County will offer an eight-week bereavement support group this fall to help adults cope with loss following the death of a parent. The group will meet weekly on Tuesday evenings from 6 to 7:30 p.m. beginning Sept. 19 and will continue through Nov. 7. The bereavement support group will be held at the offices of Visiting Nurse & Hospice of Fairfield County in Suite 114 at the Health and Wellness Center at I-Park. I-Park is located at 761 Main Avenue (Route 7) on the Norwalk/Wilton town line.

Police at 12:47 a.m. on Sept. 1 cited a 18-year-old Stamford man on drug charges after an officer stopped him for flashing his high beams while traveling northbound on New Norwalk Road. The officer smelled pot in the car and, with the help of the New Canaan Police Department’s K-9 unit, found marijuana and rolling papers in the vehicle.

The Rotary Club of New Canaan‘s 32nd Annual Family Lobsterfest is to be held Friday and Saturday, Sept. 22 and 23 on the grounds of the New Canaan Historical Society. Tickets are $35 in advance and $40 at the door, and dinner (guests may substitute in chicken and kids’ meals are available for $5) is served 5 to 8 p.m. Friday and 12 to 8 p.m. Saturday. Proceeds benefit the club’s far-reaching human services efforts (read more about those here). And there’s more information on Lobsterfest here.

South School Principal Joanne Rocco on Tuesday night shared a cute anecdote about a student who apparently ended up on the wrong bus for the first day of school and went to Saxe Middle School by mistake. Rocco said during the Board of Education’s meeting that Police Officer Jeff Deak, the popular School Resource Officer at the middle school, made sure the student “had the ride of his life” by pulling up to South School’s parking lot with the siren wailing and lights flashing, getting the student to the front office. “So now he thinks that’s normal,” Rocco said of the student, drawing laughter from the school board.

A Weed Street man on Tuesday was cited for allowing a dog to roam when his Labrador retriever got off property—as the animal has multiple times in the past—and fined $92. 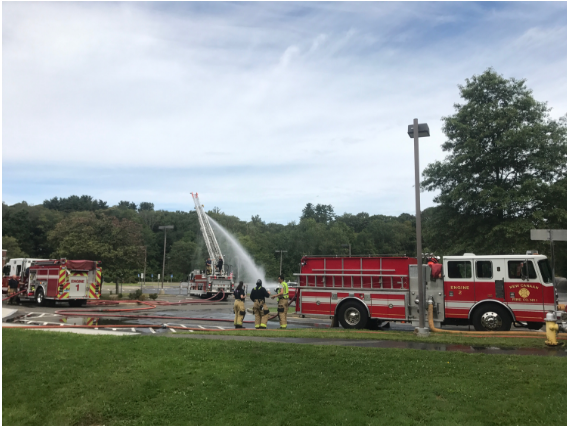 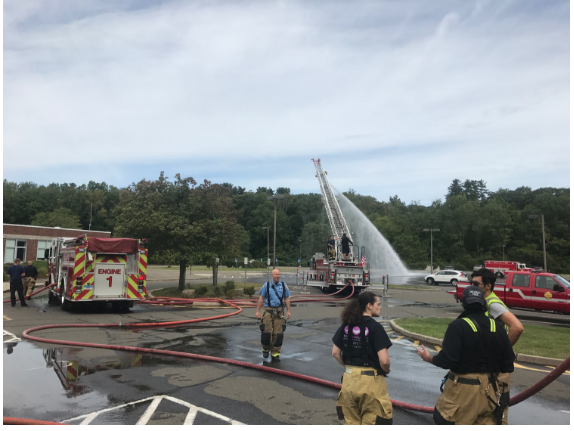