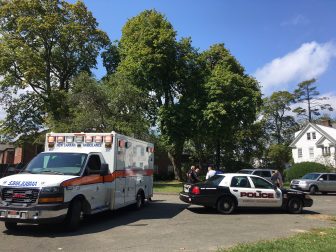 Terry Spring and Jack Trifero each were charged with third-degree criminal trespass. Spring additionally was charged with interfering with an officer.

According to representatives from property owner M2 Partners LLC, Spring and Trifero some time around 12:20 p.m. walked onto what has been called the “Maple Street Burial Ground” after parking in a contiguous private condominium’s lot.

After New Canaan’s Planning & Zoning Commission approved the Merritt Village project last November, the question of appropriate protections for (and ownership of) the burial ground—a collection of scattered gravestones, disinterred grave shafts and even bodies that M2 itself discovered—lingered before the property owner could pursue its redevelopment project in earnest. 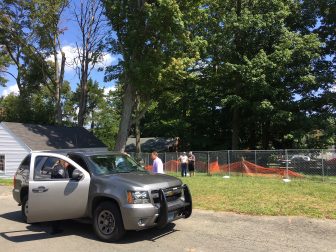 Police on the site of Merritt Village on Sept. 7, 2017. The protected burial ground area can be seen behind construction fencing in the background. Credit: Michael Dinan

Spring and Trifero had been part of a group that said it was concerned about preserving local history, calling for P&Z to designate as “cemetery” ground areas of the Maple Street property where, archeological experts have said, people who had been buried there were deliberately dug up and moved to more desirable resting places, such as Lakeview Cemetery.

Ultimately, P&Z rejected the idea that the area where bodies had been removed could still be considered cemetery ground, though protections were put in place—as M2 had offered from the start—to mark the burial site and protect areas where buried bodies had actually been identified.

In the intervening months, according to M2 representatives, Spring and Trifero have made their way to the burial ground area on multiple occasions, to the point where they’ve disrupted pre-demolition and –-construction activities. They’ve also contacted municipal building and P&Z officials multiple times in order to create paper work and delays in the project, according to M2 managing partner Arnold Karp.

Karp said that on Thursday afternoon he asked Spring and Trifero “to please leave the area” because it’s an active construction site—demolition permits were issued Sept. 1 for the former Merritt Apartments buildings.

When the pair refused to leave, Karp said, he phoned police—as he has done in the past when Spring and Trifero have entered M2’s property.

According to Karp’s associate, Paul Stone, police showed great restraint in urging Spring and Trifero to leave the property for about 20 minutes prior to arresting them.

Karp said he was not seeking to get anyone arrested.

“I am looking to get them off of a property that they have no reason or right to be on right now,” Karp said.

According to Karp and Stone, Spring and Trifero have never been genuinely interested in cemetery preservation so much as doing whatever they can to halt the Merritt Village project. In fact, they said, the property directly east of Merritt Village—the condo site where Spring and Trifero parked—represents a true desecration because burial plots there have been paved over.

“Ironically enough, one of their cars, I think it was Jack’s car, was parked on the edge of the pavement, and ironically it was parked right over where we know where there’s a grave, which came from the paving when they built the condos back in the ‘80s they paved over the graves,” Stone said.

According to Stone, Spring after police arrived said she felt unwell and so the New Canaan Volunteer Ambulance Corps was summoned to the scene.

Note: This article was updated to include the specific criminal charges involved.