The remains of a prominent New Canaan man who died 181 years ago have been found in a previously unsuspected area of the Merritt Apartments property, officials said Thursday. 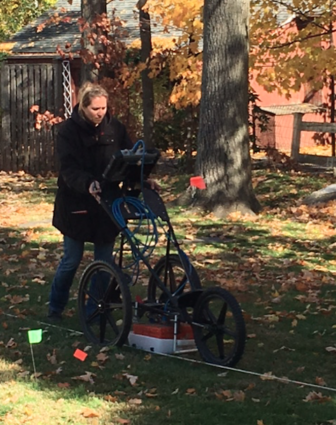 Officials trawled the Maple Street Cemetery at Merritt Apartments with ground-penetrating radar technology in order to determine whether and just where any bodies are entombed there. Published with permission from its owner

Long ignored and historically important, the ‘Maple Street Cemetery’ was thrust into a spotlight this summer when Merritt’s owners unveiled a dramatic plan to raze the apartment buildings there and build four new ones.

When the Planning & Zoning Commission finally approved 110 units for the proposed ‘Merritt Village’ last week, it included conditions designed to protect the cemetery. One of those called for property owner M2 Partners LLC to “conduct further testing” under the state archeologist “to verify that there have been no burials” (as the office of the New Canaan town attorney had asserted) in an area of the cemetery that M2 owned.

To conduct that testing, M2 managing partner and New Canaan resident Arnold Karp said he hired a U.S. Department of Agriculture-certified firm that uses a powerful ground penetrating radar system. Last week, that system turned up seven “abnormalities, things that look like they don’t belong in the ground,” Karp said.

“Six of them were large stones, and the seventh we now know to be three grave sites of Mr. David Law.”

Law’s era in town—the early-1800s, in the years and decades just after its incorporation—mark when New Canaan entered its period of great shoe-making (in 1818, historians say, some 50,000 pairs of shoes were manufactured here).

According to Mary Louise King’s “Portrait of New Canaan,” the town developed a reputation for turning out “skilled journeyman” in the field of shoe-making—young men who had served seven-year apprenticeships with “master shoemakers” here.

That reputation led the Scotland-born Law to “move his shoe-making business from New York to Park Street in 1824,” according to King.

“When Trowbridge Benedict opened a watch and jewelry business in New York on lower Broadway, he sold Law his homestead on the north corner of Park and Maple Streets, and to the north of this Law built his ‘factory.’ Though little is known of his New Canaan operation, Law was a very successful shoemaker, judged by the size of his estate when he died in 1835. He was the first New Canaan shoe manufacturer to open a branch business in the south—in New Orleans—which he visited regularly by ship.”

According to Karp, Law is buried in what is identified as ‘Parcel I’ in a survey (see it embedded as a PDF below) with two other bodies—presumably his children—and was identifiable because a silver plaque had been affixed to the top of his casket—“about five-by-four inches, oval in shape, and it gave his name and the date of his death on it, and believe it or not, 180 years later [the writing] is still crystal clear.”

The casket and other grave shafts have been marked and re-filled.

Asked why Law’s remains had not been discovered before, Karp said: “Because there were no records of him being entombed or buried there. Now there will be, because we will create them.”

It appears that Law’s descendants sold off his burial plot in 1964 and, if they’d known their forefather was buried there, took no steps to ensure the land would be protected.

“Apparently, history doesn’t mean that much to his family,” Karp said.

In terms of the Merritt Village project itself, the discovery changes little—the fence-line that will mark the boundaries of Maple Street Cemetery now will extend a bit further to include Law’s plot, though plans never called for any structures to be built on the burial ground itself.

Asked whether the discovery of bodies means M2 cannot own the land, Karp noted that the statute regarding owning a cemetery or piece of land where someone is buried came many years after Law’s entombment.

“We’ve been advised that it [the law] is not retroactive,” he said.

Karp said that the advanced ground-penetrating radar system was used to scan other portions of the cemetery ground that he owns turned up no bodies.

“We have proven beyond a reasonable doubt with the Connecticut state archeologist and a private firm that there are no other human remains in these parcels,” Karp said.

The new information regarding the cemetery is expected to come up at a January meeting of P&Z, Karp said, as one of several housekeeping matters that need to be addressed in connection with the Merritt Village approval.

The exact death date listed on the silver plaque atop Law’s casket is Dec. 7, 1835.

With New Canaan’s booming shoemaking business, some in town saw that workers would need nearby housing, and set about laying out Cherry Street as a second cross road between Park and Main Streets (Railroad Avenue, or what we call ‘Elm Street’ today, already was in place).

The men behind the new Cherry Street “in New Canaan’s first real estate development sold off eight or more building lots, priced at $500 per acre,” King writes. “Then they deeded the new highway to the town of New Canaan for 25 cents.”

On the south corner of Cherry Street, facing Park, John Lambert built what would become the Melba Inn Annex, according to King.

“An early Irish immigrant, Lambert was known for his fine shoes and in time he succeeded to David Law’s New Orleans’ outlets. He was successful enough to send his son to Yale Law School, class of 1845, the first New Canaan law school graduate.”