The owner of the future ‘Merritt Village’ apartment-and-condo complex on the edge of downtown New Canaan is in talks with Planning & Zoning officials about whether yet another public hearing will be needed to sort out whether any of the property to be developed constitutes a cemetery. 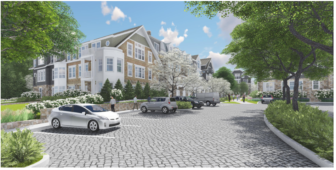 Approved with 60-plus conditions by the P&Z Commission in November following six public hearings, Merritt Village is to include 110 total units. In December, property owner M2 Partners filed an administrative appeal citing several of the conditions that involve the ‘Maple Street Cemetery.’

The conditions regarding the burial ground are objectionable to M2 because, if upheld, they would require the property owner to seek approval for an amended site plan.

P&Z is asking the hopeful property developer to return for a hearing in February, according to New Canaan resident Arnold Karp, a partner in M2.

“We are on hold because if they are going to go take a piece of my property, I can’t design a building,” Karp told NewCanaanite.com. “We are moving forward but not as quickly as I would like.”

Conditions placed by P&Z on the Merritt Village approval require: that the locations of two proposed buildings are contingent on confirmation that no bodies are found in the burial ground, in a parcel located alongside them; that under the state archeologist’s supervision, M2 further test the area to verify that there are no burials there; that if there are bodies, “all construction shall immediately cease and a modified site plan shall be submitted.”

Following the approval, during a “ground penetrating radar system” scan, three graves turned up in one section of the parcel in question (including a prominent shoemaker from the early 19th Century).

No other bodies have been found, Karp said.

M2 is hopeful that the objections raised in its appeal can be resolved locally with P&Z so that it does not progress to court, he said.

In the meantime, M2 is proceeding with its plans where it makes sense. The property owner filed for demolition permits in December, and has notified residents that they will need to relocate.

M2 Partners still has six months of architectural work ahead of it, Karp said, and is looking at extensive abatement work removing asbestos and lead paint prior to the physical demolition.

“Our first goal is to get everybody situated elsewhere and then to go in and do what I call the ‘lighter demolition’—asbestos out, old tiles out and then we can take down the buildings and start to prepare the site,” Karp said.

The two-year project, if it starts in earnest in the next few months, should be finished by the spring of 2019, he said.