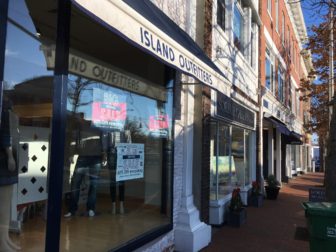 Island Outfitters at 80 Main St. is to close at or near month’s end. Credit: Michael Dinan

Located at 80 Main St. since late-2011, the store is selling all merchandise at 50 percent off, according to staff members.

The New Canaan location—formerly Talbot’s—is one of six for 1994-founded Island Outfitters, and signs posted outside the shop instruct customers to visit its store at 1189 Post Road in Fairfield. The retailer was among the first to carry Vineyard Vines-brand clothing.

Owner Greg Hall could not immediately be reached for comment. Staff members said they would miss their customers and thanked them for their loyalty.

Island Outfitters is the second clothing retailer on its block to close in the last three months, after men’s shop JoS. A Bank at 70 Main St. shuttered in October.