A long-vacant New Canaan home cited for blight three summers ago finally has been sold. The town earlier this year prepared to notify a lien-holder for the Colonial at 4 Woodridge Circle and assess fines. The 3,608-square-foot home sits on 2.05 acres. It sold for $1.4 million, according to a property transfer recorded Tuesday in the Town Clerk’s office. 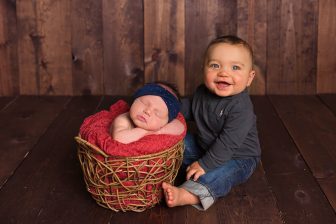 A mother-daughter dog duo who have never been separated—Etta and Savannah—and are known to New Canaan’s Cathy Kangas, are to lose their home at the end of this month because their owner can no longer keep them. The black Labrador retriever mixed-breed dogs are described as “very sweet and mellow,” good for a family and have lived with other dogs in the past. Anyone interested in adopting them should contact Toni Palladino at 203-943-5813. Here are a few photos of them: 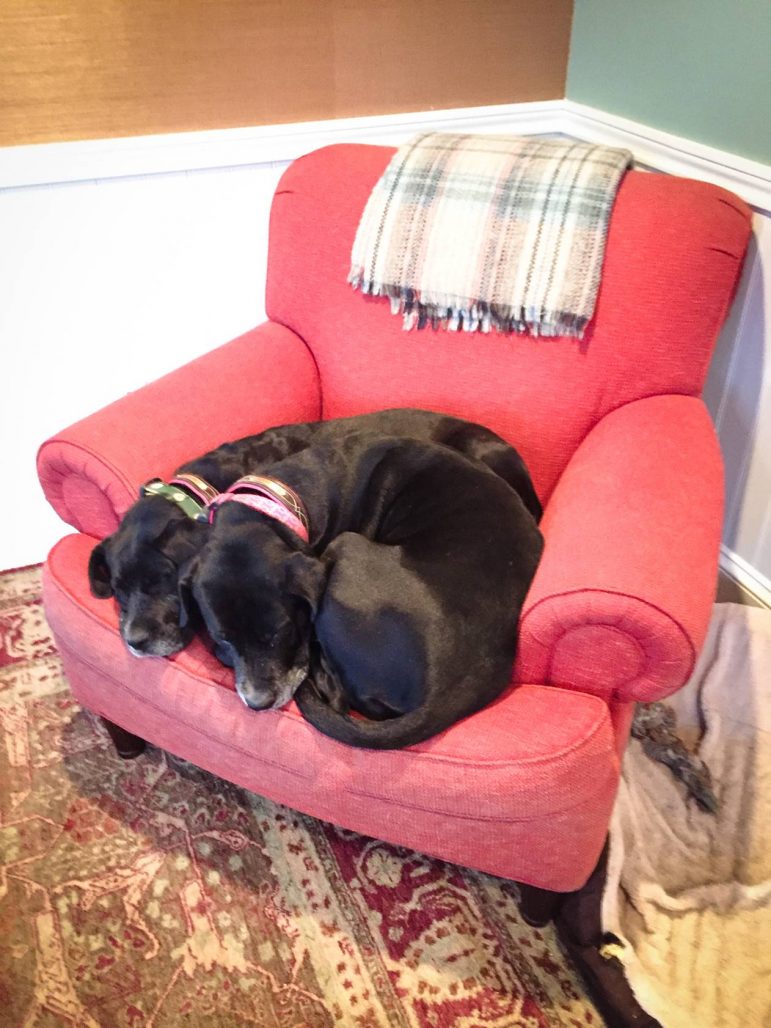 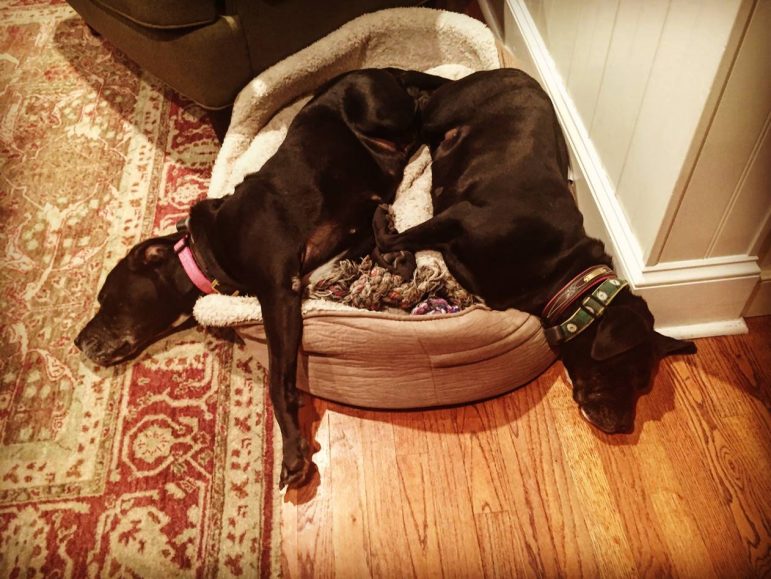 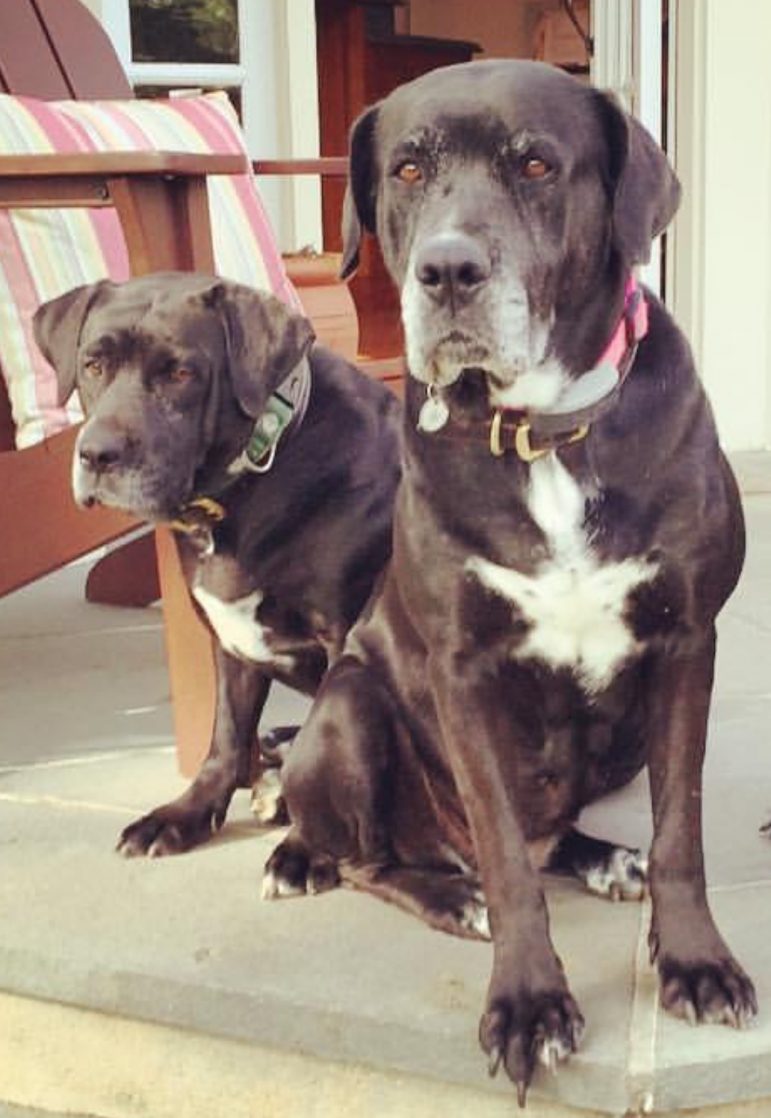 Dawn Norton, former CFO of New Canaan, has been hired on an interim basis in Clinton. 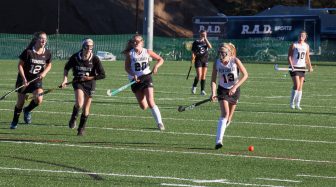 New Canaan played its first official game on the new Water Tower turf field number one on Tuesday—a 5-0 victory for the fabulous and unbeaten freshmen women’s field hockey team (its fourth shutout). The unbeaten Rams side plays its final game of the season at 4:30 p.m. Monday versus Greenwich, on the same field.

The Advocate of Stamford reported in a column that Steve Bannon, former White House chief strategist, had dinner Oct. 7 with friends at the Roger Sherman Inn. 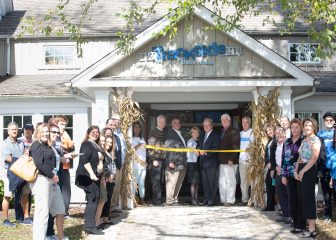 Abilis and the town of Wilton cut the ribbon on the new Abilis Life Skills Program at the Wilton Trackside Teen Center. Pictured are: Tearsha Askew of Abilis, Jeffrey Rutishauser, chairman of the Wilton Board of Finance, Artie DiRocco, president of the Trackside Board of Directors; Lynn Vanderslice, first selectman of Wilton, Dennis Perry, CEO and president of Abilis, Mark Ketley, executive director of the Trackside Teen Center and Tim Murtha of Abilis. Photo credit: Cara Gilbride @ Callalily Studios.

At about 9:10 p.m. on Oct. 18, an 18-year-old Ridgefield man and 17-year-old male from Norwalk were cited for possession of marijuana after an officer on patrol came across them while parked in Waveny after hours. 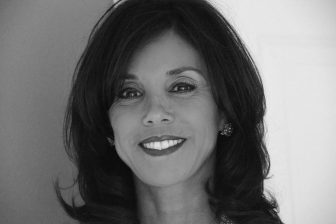 New Canaan resident Michele McCallion, a Merrill Lynch wealth manager in Greenwich, was named to 2017’s “Top Wealth Advisor Moms” list by Working Mother Magazine. McCallion, a mother of two, earned a master’s degree in Management from the Kellogg Graduate School of Management at Northwestern University, and a bachelor’s degree in Finance and Marketing at Boston College. She’s involved with charitable organizations including AmeriCares, Kids Helping Kids and Al’s Angels. 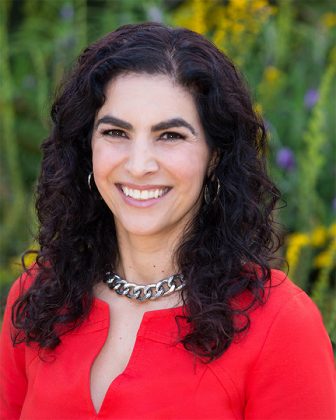 The King School Board of Trustees elected Dr. Karen Eshoo as the new Head of School effective July 1, 2018. Dr. Eshoo will come to King from the Vistamar School, a private, independent high school located in Los Angeles, where she has served as Head of School for the past six years.

A 67-year-old Dan’s Highway woman was charged with failure to respond to an infraction on Oct. 16. The original charge, from March 30, was failure to license her dog. 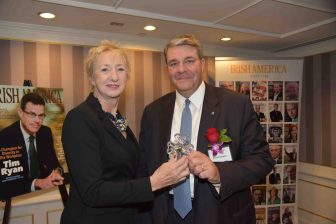 Pictured here is David receiving his Waterford Crystal award at the special 20th Anniversary celebration of the Wall Street 50 Awards dinner at the St. Regis New York, where Tim Ryan, chairman of PwC US, delivered the keynote address.

Two bits of news from Bankwell: Executive Vice President, David Dineen was recognized  as a 2017 Wall Street 50 Honoree by Irish America magazine on Oct. 11. Irish America magazine’s Annual Wall Street 50 recognizes the outstanding accomplishments and success of the best and the brightest Irish-American and Irish-born leaders of the financial industry. Also, Bankwell Financial Group, Inc. (NASDAQ: BWFG) reported net income of $4.3 million or $0.55 per share for the third quarter of 2017, versus $3.1 million or $0.41 per share for the same period in 2016. 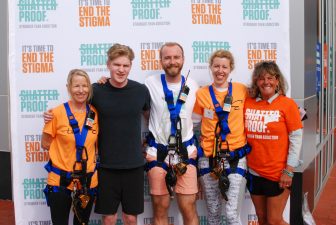 Finally, New Canaan residents Karl and Andrea Reinhardt helped lead “Team E” to the top fundraising position of all participating teams in the Shatterproof Challenge Rappel event at Harbor Point, Stamford on Oct. 8. The rappelling event generated over $125,000 in support of Shatterproof’s initiatives to raise awareness and funds to fight addiction. Team E is named in loving memory of Evan “E” Reinhardt, who succumbed in July of 2015 to a drug overdose. Evan was a 2009 graduate of New Canaan High School.