Two Old Norwalk Road dogs are under home quarantine through Nov. 21—one after biting, the other after scratching a home heating oil man during a service visit at the residence on Election Day. An Eskimo dog bit the man in the left calf, and a boxer mix scratched him. No tickets were issued, according to the Animal Control section of the New Canaan Police Department.

A bank that in August took ownership of a Hoyt Farm Road house following foreclosure on Monday started eviction proceedings against its former owners. The six people who occupy the home were to vacate it by Oct. 28, according to a filing in state Superior Court in Norwalk.

Police Chief Leon Krolikowski said during the Police Commission’s meeting Wednesday night that school bus violations are “up substantially” at 65 so far in 2017 compared to 42 at the same time last year, due mainly to school bus drivers reporting the incidents. The chief said NCPD has reached an agreement with a local newspaper whereby the names of those fined for passing school buses (or those who own the vehicles caught doing so, on bus-equipped cameras) are supplied to the newspaper in exchange for publishing them. “The [New Canaan] Advertiser has agreed to print the names of the people that we are giving these $460 infractions to, because it’s a serious offense, risk to children,” the chief said. “That is part of the strategy to bring attention to the problem.” 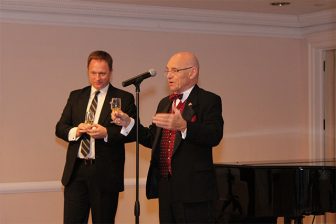 Congratulations to longtime New Canaan resident Laszlo Papp, who on the recommendation of Hungarian Prime Minister Orbán Viktor received one of the highest-ranking decorations by the central European nation’s government. The “Officer’s Cross of the Hungarian Order” recently was presented to Papp in New York City by Consul General Kumin Ferenc in the presence of Áder János, president of Hungary. Known to scores of locals as a member of the Planning & Zoning Commission, Papp was a founding president of the North American Hungarian College Students’ Federation and member of the Western Hungarian Scientific Council’s advisory board, according to an award citation. “As an officer of the American Institute of Architects, over the years he organized the visit of scores of Hungarian architectural students and professionals to the United States to study and/or work. For his exemplary services to his adoptive country, he received the esteemed Americanism Medal, awarded by the U.S. president. Laszlo is an Extern Member of the Hungarian Academy of Sciences and Vice President of the American-Hungarian Foundation. As president of the Memorial Committee, Papp’s latest achievement was the completion of the Memorial to the ’56 Revolution in New York City’s Riverside Park, at the foot of the Kossuth monument, commemorating the 60th anniversary of the Hungarian Revolution. For his leadership of this project, he received the Officer’s Cross of the Hungarian Order.”

Animal Control midday Thursday fined the owner of a Benedict Hill Road dog $92 for allowing a dog to roam after the English setter was found on Silvermine Road. The dog is a repeat-offender roamer, officials said. 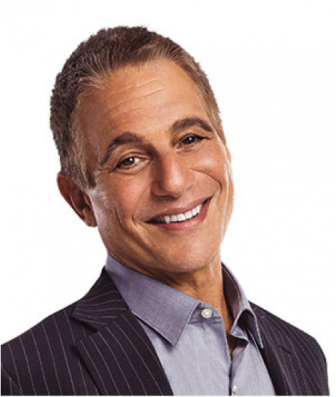 Thirty tickets remain for the Waveny Park Conservancy’s winter-themed Golden Gala on Dec. 2 at Waveny House. Not only will actor Christopher Lloyd, son of Ruth Lapham Lloyd and former resident of Waveny, and his wife Lisa Lloyd serve as Honorary Chairmen, but Lloyd’s friend and Taxi co-star Tony Danza also will put on a special musical cabaret performance with his four-piece band, organizers say. The gala will commemorate the 50th Anniversary of Waveny being entrusted by Ruth Lapham Lloyd to the town of New Canaan and will raise the funding necessary to restore Waveny Park’s pond and its surrounding landscape to its former glory. See ticket availability here. Lead sponsors include Francos Wine Merchants, Karl Chevrolet, Manfredi Jewels, Moffly Media, and This Old House.

At 3 p.m. on Monday, Nov. 20 the entire community is invited to the front of New Canaan High School for the unveiling of a memorial garden dedicated to Walt DeTour, a longtime resident who died in February while skiing. Remembered in the local lacrosse community for his many years as a devoted coach and team leader, DeTour has had a New Canaan Lacrosse Scholarship Fund award established in his honor. Members of past and present NCHS Varsity Ski Teams will be on hand for the garden dedication. 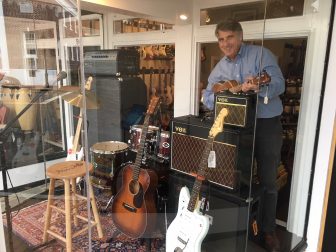 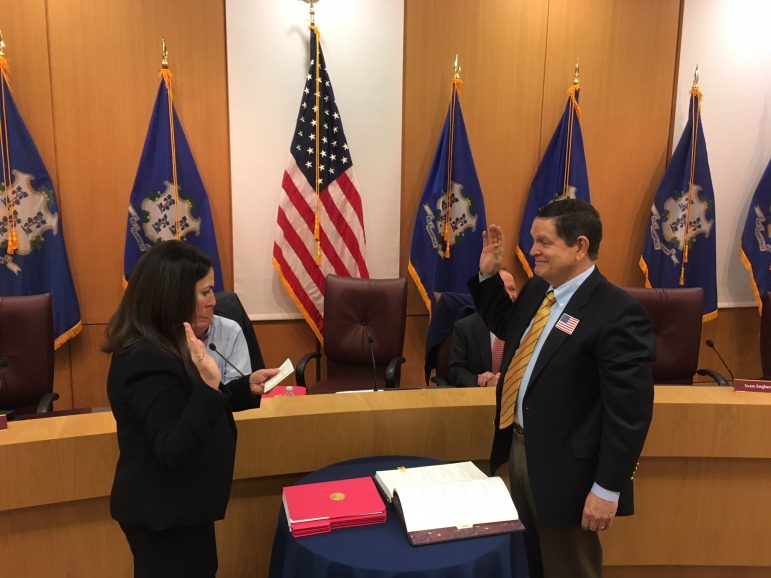 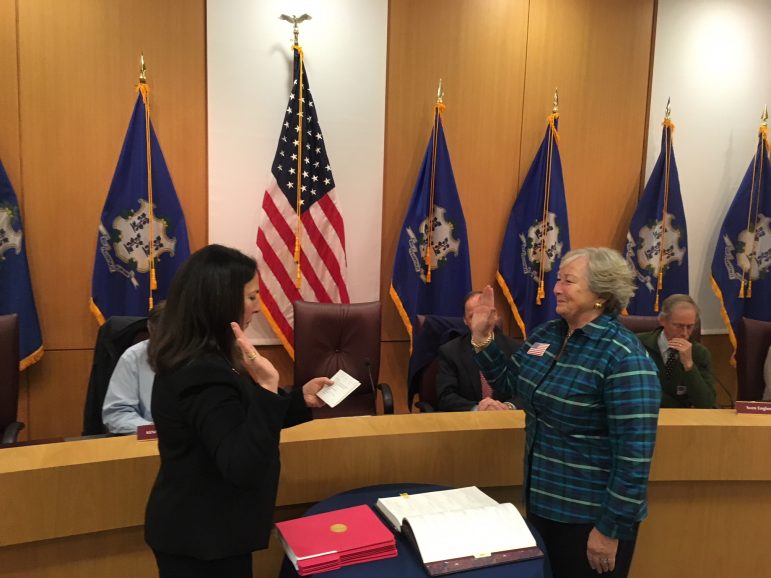 The 2017 limited edition, hand painted ornaments are now for sale and pick up at The New Canaan Historical Society. They include: The newly built New Canaan Post Office, the Roger Sherman Inn, Joe's Pizzeria, which celebrates 50 years of business, the Train Station, and the Old Faithful Fire truck with Philip Duval at the wheel, Santa and Siren, the fire dog, on board. Designed by Faith Kerchoff, the commemorative ornaments are individually cut, sanded, painted, inked and labeled by the Crafty Tuesday volunteers, who include Margery Gardner, Judy Gilroy, Joan Hayenga, Yvonne Hunkeler, Tracey Karl, Susanne Landis, Charill Pierce, Chris Pinney, Bianca Romano, Betsy Sammarco, Susan Serven, Martha Wieber, Judy Wiley, Robin Wolyner, and Helen Belluschi Each ornament sells for $15, and all proceeds go to The New Canaan Historical Society. There are also ornaments from previous years available for purchase, including several vintage ones.

The Encore Expo group took a tour of Storm King sculpture park in October, (l-r) Beth Dwyer, Aniela McCool, Joanna Toscano, Robin Miner, Debbie Eagan, Meri Erickson, Joanne Santulli, Sue Hull, Mary Liz Lewis. Encore is a social organization founded in 1985 for women of New Canaan and surrounding towns. We will be kicking off the holiday season with a festive Holiday Party at Woodway Country Club on December 3rd. A variety of activities are available for all members throughout the year and can be found on our website “encoreclubofnewcanaan.org”. We offer many social and recreational activities each month, as well as special events appealing to our broad membership of singles, couples and empty nesters. The following is a sampling of activities we offer to our members. Adventures in Food and Wine, Book Club, Bridge, Cooking and Art Programs, Dinner and Lunch Groups, Gardener’s Exchange, Golf, Hiking, Mah Jongg, Movie discussion Group, New York City Tours and Tennis just to mention a few. Our summer event is already underway and once again will be held at The Silvermine Golf Club with dinner and dancing. New prospective members can sign up to join Encore on our website shown above. 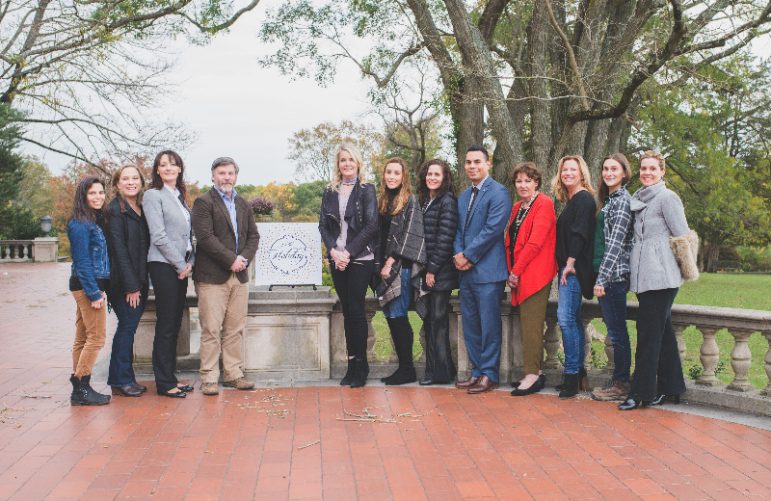 On November 1st the Holiday House Tour 2017 Steering Committee got in the holiday spirit along with tour sponsors: April Kaynor, Bankwell, Elise Nursery, Jane Beiles, Lilliann August, Moffly Media, Pound Ridge Nursery, and Ring's End to kick off the start of ticket sales for the December 1st & 2nd tour. The Homes for the Holidays House Tour is a biannual event put on through the Newcomers Club of New Canaan. This years tour will feature five homes, festively decorated by professional designers including Debbie Probst and One Kings Lane, Design Dot, Krystie Inman & Tracey McCauley, Havilande Whitcomb Design and Ainsley Hayes. Tickets can be purchased for $85 at www.nchousetour.com.