The Westchester, N.Y. woman who in July accused the town of race discrimination and threatened legal action while fighting a $30 parking ticket ended up paying the fine in the end. Farva Jafri paid the $30 on Aug. 6 and used New Canaan’s online system, which included a $3.50 service charge, NewCanaanite.com learned through a public records request.

First Selectman Kevin Moynihan said during a media briefing in his Town Hall office Thursday that two parties came forward Aug. 30 prepared to make formal proposals to acquire Vine Cottage but did so hours after a deadline, prompting the town to extend it.

Women’s clothing boutique Hamptonite is closing its location 140 Elm St. after more than three years there. A representative of the shop said it’s moving to a smaller commercial space at 7 Elm St., which had been occupied for about five years by Jade, a women’s fitness wear shop that recently closed.

The Board of Selectmen on Tuesday voted 3-0 to appoint Wave owner Heather Satin to the Tourism and Economic Development Advisory Committee. The group’s interim chair, Tucker Murphy, said a past member had been “unable to fulfill” a retail profile on the Committee and that Satin would step into that role. A comparison between the original members and current roster shows She-La-La owner Sheila Grow is no longer on the Committee.

In answering a complaint related to their eviction from a Parade Hill Road home, a New Canaan man and woman said they’ve experienced “severe basement flooding causing mold” and have faced accusations of “planting mice” in the multifamily home. “We have video of the landlord’s mother destroying the veggie garden with her weed wacker and threatening my son so he called police and a report was made,” according to the answer. According to the complaint, they were evicted for failure to pay $2,500 in monthly rent.

A reminder of some great local events coming up soon:

The New Canaan High School class of 1979 is to hold its 40th reunion Oct. 4 to 6, including a tailgate at the Oct. 3 football game, gathering at Gates, platform tennis event and dinner dance at Stamford Yacht Club ($90, deadline to register is Sept. 6). Details here. Those interested in volunteering can contact co-chairs Belinda Grosskopf Wasser at belinda@rocketgirlsolutions.com, Kathy Megrue Smith at megrue.smith@gmail.com or Libby Campbell Wilmot at elizabethwilmot@yahoo.com. 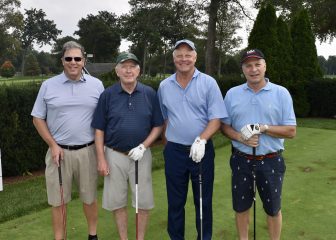 The Exchange Club of New Canaan will host its 18th annual golf tournament on Oct. 1 at Woodway Country Club. Proceeds support the nonprofit organization’s foundation, whose primary mission is the prevention of child abuse. Its largest beneficiary is the Exchange Club Parenting Skills Center in Stamford. Corporate Sponsors (foursomes/twosomes) as well as single players are welcome. The opportunity to be a tee box or advertising partner is also available. Contact Mike Abbott at michael@abbott.cx or visit the club’s website for more information.