A credit card turned into New Canaan Police after it was found on South Avenue around 3:27 p.m. last Saturday was logged into the department’s property management system, its owner notified of the discovery.

The New Canaan Museum & Historical Society on Friday is opening a new exhibition of more than 40 Presidential posters and over 400 buttons from both parties. The Cody Family Campaign Collection will be on display through Nov. 20. It concentrates on campaigns from 1900 through 2014, but also includes an 1860 centerfold from Harper’s Weekly highlighting the 1860 Democratic Convention in Charleston, S.C.

The New Canaan Building Department on Oct. 9 received an application for an “after-the-fact” permit for about $17,000 of work done at 30 Jelliff Mill Road. The work included basement work, the application said.

New Canaan resident Sloan Alexander, who last year ran the New York City Marathon to benefit Dylan’s Wings of Change—an affiliate charity of Sandy Hook Promise that’s dedicated to the memory of Dylan Hockley, a 6-year-old boy with autism who was killed in Sandy Hook school shooting—will run a “virtual marathon” on Oct. 25, since all running races are canceled amid the COVID-19 pandemic. The virtual marathon will start at New Canaan High School and include Darien and Norwalk before finishing back in town. Click here to donate or get more information. Alexander is a founding member of Sideways, a local band that’s performed numerous times in support of Sandy Hook Promise.

Police cited motorists for passing school buses on Silvermine Road twice Monday morning—at 9:57 a.m. in the area of No. 707 and again at 10:04 a.m. near the intersection of Rilling Ridge Road. The infraction-level offense carries a $450 fine. 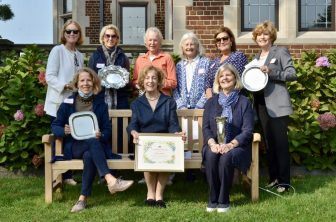 Unable to hold its annual meeting and awards luncheon in June due to COVID restrictions, the New Canaan Garden Club came together at Waveny House in early September to kick-off the year on the back lawn, socially distanced, to celebrate and acknowledge the talents and accomplishments of 14 garden club members that received awards. Co-Presidents Lauren Bromberg and Anda Hutchins accepted a certificate from the Garden Club of America honoring the club’s 100th year anniversary in the GCA. 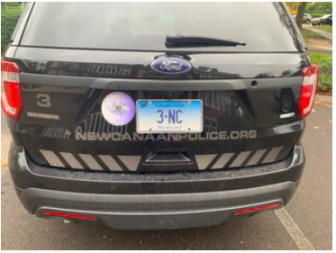 The White Buffalo and Solé both aced unannounced health inspections this month, with scores of 92 and 93 out of a possible 100, respectively.

New Canaan Library on Oct. 30 and 31 will put on a “Halloween Jack-o-Lantern stroll” outside near the corner of South Avenue and Maple Street. The display will be free and open to the public. The library’s 13th Annual Lit Lunch @ Night featuring Alice Hoffman is to be held Friday, Nov. 13—sponsors include Christine Saxe and Bankwell.

Police at 7:52 p.m. Tuesday arrested a 33-year-old Phoenix woman and charged her with failure to respond to an infraction. They came upon the woman after responding to a complaint that people were going door-to-door selling magazines on the 500 block of Weed Street. After they found her, officers discovered that a paperless re-arrest warrant or “PRAWN” warrant had been issued by Wilton Police, for violating a town ordinance in that town last Halloween.