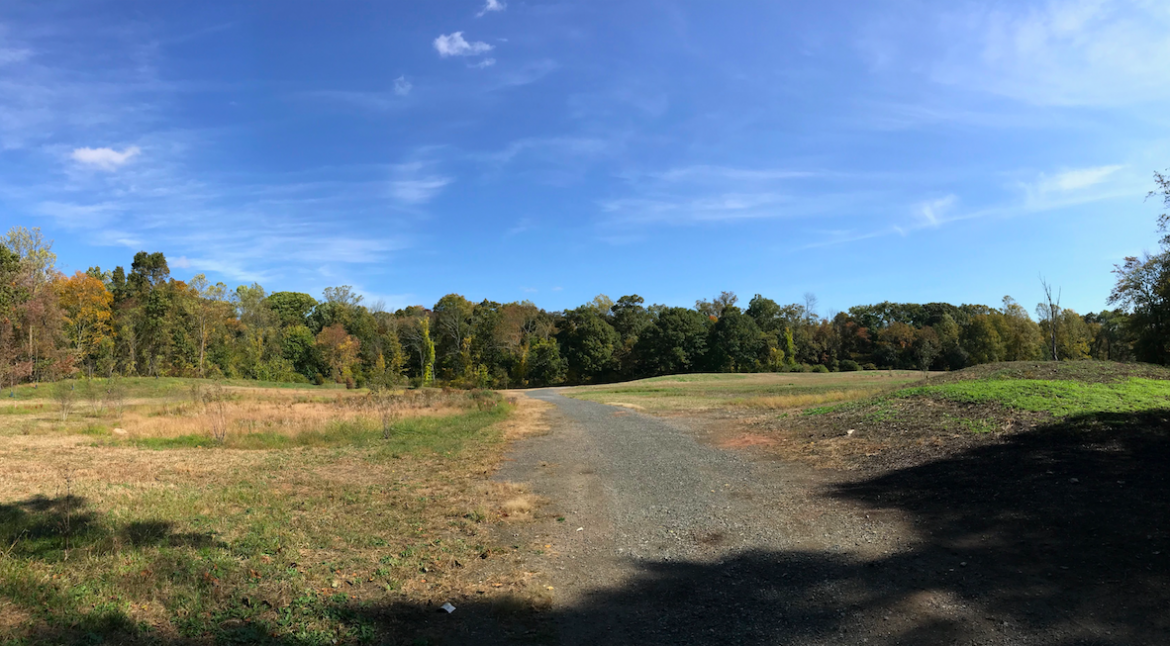 New receptacles for used dog poop bags will be placed at either end of the southeastern corner of Waveny, an area known among locals as "the cornfields." Credit: Michael Dinan

Town officials are urging Waveny visitors to carry their trash out, following complaints regarding full dog poop bags left inside the popular park.

In addition to a section of Waveny along Lapham Road near the Merritt Parkway where dog-walkers long have dropped the used bags, the area commonly known as “the cornfields” in the park’s southeastern corner is seeing full bags left behind, officials said Wednesday night during the Parks & Recreation Commission’s regular meeting.

“This is absolutely an outcry for the residents of New Canaan to really understand the carry-in and carry-out of a park that is getting more use than it ever has, and I think we are extremely lucky to have such beautiful facilities,” Commission Chair Rona Siegel said during the appointed body’s meeting, held via videoconference. “And to see them treated in such a manner is beyond disturbing. So I would just reiterate that this is the time with the use and all the effort and sweat that goes into these parks to make them beautiful and for everyone that people are reminded to take their trash with them.”

For years, the problems of discarded poop bags and dog waste left uncollected at parks such as Waveny and Irwin has resurfaced. Suggestions to install additional trash cans have sometimes been met with approval and at other times with pushback from town officials who say such accommodations are expensive and promote bad behavior. A few years ago, a local woman began sticking ‘Shame on You’ flags into deserted dog feces at Irwin.

During the Commission meeting, the head of an organization that’s helped with landscaping projects behind Waveny House said the group has discussed the problem and is offering to pay for a six-month trial where four additional trash receptacles are placed in the park and collected by a private company. Two would go near the cornfields, one by Waveny Pond and a fourth by the parking lot alongside the Powerhouse Theater, according to Waveny Park Conservancy Chair Caroline Garrity.

“We got the pricing—it wasn’t bad,” she said. “And just to see if it works, because it is really unsightly.” 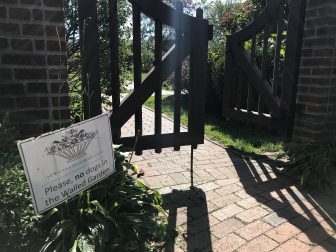 Dogs are allowed throughout Waveny grounds, though there’s a sign from the New Canaan Garden Club asking visitors not to bring dogs into what the club calls “the Walled Garden.” Credit: Michael Dinan

Garrity added that “the donor” to the organization “said maybe we should ban dogs for a week from the park and maybe that would make people awaken to the problem.” It wasn’t immediately clear whether Garrity was referring to a person from the Jeniam Foundation, which donated toward the cornfields project (the Conservancy renamed the area “Jeniam Meadow”). In any case,  neither the Conservancy nor its donors have authority to regulate dogs in a public park.

Recreation Director Steve Benko said that when COVID-19 virus hit the area, “basically all the towns in Fairfield County closed all their parks and facilities.”

“And Waveny Park was probably the first park to reopen in this area of the state,” he said. “And what has happened, is we have a lot of people coming to Waveny now. We have become the Fairfield County park. I would guess between 50% and 60% of the people who come to Waveny do not reside in New Canaan. A big percentage. I think more nonresidents come to the park than residents. And I think a lot of them don’t really care about taking care of our park.”

Siegel said that she will meet with public works and recreation officials to discuss “additional signage in the park that reminds people as they get out of their cars that it is a carry-in and carry-out.”

“And obviously I think everyone knows, there are dumpsters in the parks—near the paddle hut, the Waveny House, the Mead Park concession and at Irwin,” she said. “So I would just really demand that people start carrying in and carrying out. This is not how the parks should be used.”

Garrity said the Conservancy could present its idea about privately funded trash receptacles at a future Commission meeting.

4 thoughts on “Parks Officials To Dog Walkers at Waveny: Carry Used Poop Bags Back Out”