Responding to one idea for addressing the problem of abandoned dog waste at Irwin Park, public works officials have relocated a garbage bin to its northwest corner opposite Bayberry Road. 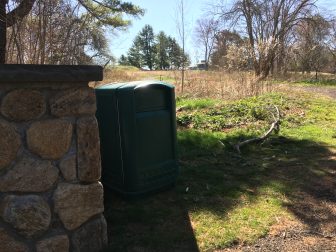 The newly located rubbish bin at Irwin Park, at the park’s northwest corner, is meant to serve as a receptacle for used dog waste bags. Credit: Michael Dinan

Public Works Director Tiger Mann said the bin originally had been located near Irwin Barn and was moved at the request of the Parks & Recreation Commission.

According to Commission Chair Sally Campbell, the thinking is that the newly placed bin would “make disposing of dog waste a little easier” for some.

Specifically, some park-goers would pick up after their dog but then toss the used bag off-trail somewhere behind the main house, presumably because they didn’t want to have to carry it all the way around the Flexi-pave loop, she said.

“Evidently it bothers other people and they think walking half a mile with a bag is an inconvenience, I guess,” Campbell said. 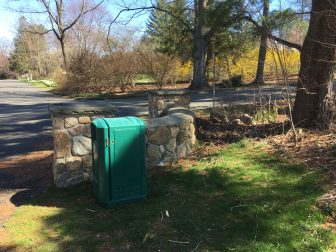 Another look at the newly placed bin. Credit: Michael Dinan

“We are hoping by putting trash can there people will say, oh yes there is a place for the trash,” she added. “That is the goal, to try and make it easier for people to locate the trash bin and dispose properly” of their used bags.

Tucked inside a stone wall near the corner of the park, the bin is almost entirely invisible from Wahackme Road.

Its placement is the latest effort from the Commission to combat the problem of irresponsible dog owners.

In February, the Commission put out a call for the public to help get ideas for addressing the problem at both Irwin and Waveny. It formed a committee to focus on dog litter and one local woman led an effort to place ‘Shame On You’ flags on abandoned dog waste at Irwin. The Commission also has considered pursuing an outright ban of dogs at parks and even installing motion-activated trail cameras to help police identify offenders.