Police last week responded to a dispute between an employee of the tax office at Town Hall and a customer, regarding payment of a tax bill, records show. At about 2:43 p.m. on Feb. 24, a resident came to the tax office to pay the bill in cash, according to a police report. The employee told the customer that he couldn’t pay it in cash and the customer grew angry, the report said. Ultimately, the resident was asked to leave the office and did so, it said. No criminal violations occurred, police said.

The New Canaan Family Fourth Committee met Thursday and agreed to plan—pending restrictions from the state—for the July 4th fireworks at Waveny. The volunteer committee discussed different possible scenarios in the pandemic. When Recreation Director Steve Benko raised the prospective difficulty of keeping blankets six feet apart, committee member Suzanne Jonker said, “I think we need scientific evidence on six feet. I mean, I don’t want to start a debate but they better come up with that. They just kind of arbitrarily came up with six feet.” Then, at the suggestion made lightly of spray-painting 10-foot circles at Waveny, she said, “Get [President] Joe Biden’s team to do that. They’re good at that sort of thing.” Last year’s event was canceled due to COVID-19 virus. The Fourth of July falls on a Sunday this year.

New Canaan has had 1,104 confirmed cases of COVID-19, cumulatively, according to data released Thursday by the state Department of Public Health, as well as 92 probable cases and 40 deaths. The state also now is publishing an extended weekly data report for those who wish to track changes in case numbers over time. Gov. Ned Lamont on Thursday announced that on March 19 restaurants, retail shops, libraries, gyms, houses of worship and personal services businesses in Connecticut may open at full capacity though with some requirements such as mask-wearing and social distancing. All sports as of March 19 may practice and compete, under Lamont’s directive, subject to state health guidance, and the Connecticut travel advisory on that date will be classified as a recommendation rather than a requirement.

Catherine Palmer, charged in November with three counts of cruelty to animals after three puppies were found to have died at her Butler Lane home, is scheduled to appear March 10 in state Superior Court. She has pleaded not guilty to the felony charges. 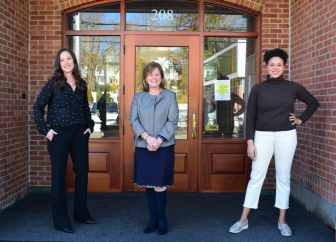 Bankwell has donated $5,000 to LiveGirl, a New Canaan-founded nonprofit organization that works with surrounding public schools and youth organizations to provide year-round, free-of-charge leadership development and mentoring for girls in grades 5 through college. LiveGirl and Bankwell together will celebrate International Women’s Day on March 8. This year’s theme is #ChooseToChallenge gender bias and inequality. The community is invited to join a Zoom conversation at noon featuring poetic activist She Will Speak and a Gen Z panel moderated by Dr. Vida Samuel, University of Connecticut Women’s Studies professor. “Bankwell is proud to support LiveGirl, their evidence-based programs build self-esteem and social-emotional intelligence which are the building blocks of a bold leader,” Bankwell Executive Vice President and Chief Risk & Credit Officer Christine Chivily said in a press release.

The Building Department on March 3 issued the Department of Public Works a permit for ADA-related upgrades at Waveny House. They include “two new accessible bathrooms at upper level and one family bathroom on main level” as well as replacement of an exterior staircase The Board of Selectmen in October approved a $750,000-plus contract with a Ridgefield-based company for the work.

The New Canaan Rotary Club provided another in its series of donations of PPE to Visiting Nurse and Hospice of Fairfield County, now part of the Waveny LifeCare Network.

Police cited a motorist for passing a school bus at 10:07 a.m. on Feb. 26 at Smith Ridge Road and Norholt Drive. 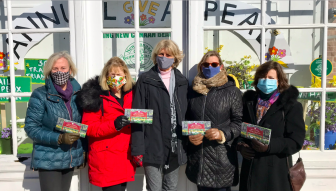 The New Canaan Beautification League’s annual appeal mailers have reached the mailboxes of New Canaan residents. The mailers have a new look this year, which also reduces paper waste, under the leadership of appeal co-chairs Patricia Spugani and Amy Reid. To celebrate the launch of the annual appeal, NCBL currently has a colorful display in the window of the Playhouse building on Elm Street, to help usher in spring. Kids of all ages are encouraged to count the bees in the display to enter a drawing to win a pair of spring gnomes on NCBL’s Facebook page. Donations raised through the annual appeal will help support NCBL projects, such as the 220 hanging baskets in the downtown, the Pine Street mailbox garden, maintenance of 30 triangles throughout town and Lee Garden on Chichester, educational programs open to the public and more.  Donations will also help fund new projects this year which will include new plantings at the train station garden, a new garden at the entrance of Mead Park as well as new plantings on two triangles in the park.

Finally, the United Methodist Church of New Canaan announced that the Rev. Matthew T. Curry will be appointed new pastor on July 1.