Zumbach’s Gourmet Coffee on Pine Street will reopen Saturday. It had closed temporarily due to COVID-19.

VFW Post 653 is raising funds for flags to place on the gravestones of military veterans buried in New Canaan—donation information here. Also, please consider joining the VFW for the placement of the flags on the morning of Saturday, May 28, ahead of Memorial Day—meet at 8 a.m. near the Main Street entrance to Lakeview Cemetery. Details here.

A trial date of Dec. 21 has been set in the New Canaan Preservation Alliance’s lawsuit against the Planning & Zoning Commission and New Canaan Library, according to Connecticut Judicial Branch records. (The NCPA filed a second lawsuit against P&Z in January, records show.) 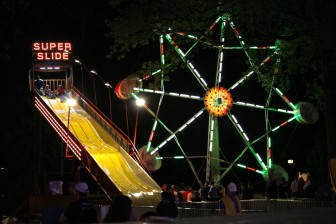 May Fair is this weekend, rain or shine, at St. Mark’s on Oenoke Ridge. It runs 5 to 9 p.m. Friday and 9 a.m. to 5 p.m. Saturday. More info here. (Park at the Lumberyard Lot or Richmond Hill Lot downtown and catch The Getabout shuttle, running continuously.)

Police received reports of motorists passing stopped school buses at Ponus Ridge and Hawks Hill Road (9:17 a.m. on May 2) and at Main Street and Millport Avenue (4:55 p.m. on April 29).

The Board of Selectmen during its regular meeting Tuesday reviewed an approved $4,650 contract for a carpet for a “brides room” at Waveny House, with Westport-based Redi-Cut Carpet & Rugs.

Speaking of which, here’s a snapshot of how NewCanaanite.com‘s free daily newsletter performs—sign up here. 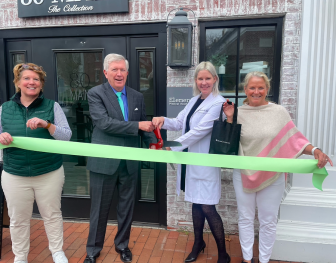 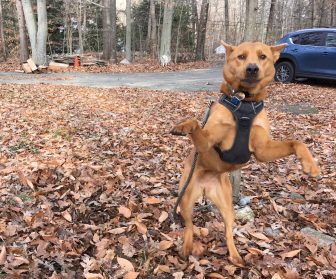 An excitable Penny Lefland at the Silvermine-Fowler Preserve on Dec. 12, 2018. Credit: Michael Dinan

We also wish the best to Aaron Lefland, who has left his position as executive director of the New Canaan Land Trust after five years in order to take on the role of deputy director of the Connecticut Land Conservation Council, based in Middletown. We hope to see him and especially his wonderful dog Penny around New Canaan soon.

New Canaan Police K-9 dog, Apollo, is healthy, happy and in the care of the department, Chief Leon Krolikowski said. Apollo will return to service in New Canaan soon.

Police at 6 p.m. on April 27 arrested a 42-year-old Norwalk man by warrant and charged him with second-degree failure to appear. He’d been charged by New Canaan Police last May with a series of motor vehicle-related offenses, Connecticut Judicial Branch records show.

New Canaan’s Victor Alvarez this week announced his candidacy as a Democrat seeking the 125th District House seat in the Connecticut General Assembly.

First Selectman Kevin Moynihan during Tuesday’s Board of Selectmen meeting referred to a memo from land use attorney Tim Hollister regarding the town’s application for an affordable housing moratorium as though it were a public comment on a completely separate, state-mandated affordable housing plan that’s due in June.

Though she’d been acquitted on felony animal cruelty charges following the deaths of five dogs in her care, Heidi Leuders was sentenced this week to 15 months in prison for first-degree criminal damage to property for leaving the dogs’ remains in the Fairfield house she was renting, the CT Post reported. She was arrested in January 2019 after police found the remains of dogs in crates inside the house. 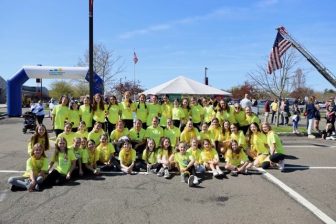 The “Sunshine for Scarlett” team of New Canaan Dance Academy dancers at the Cystic Fibrosis Walk at NCHS, May 1, 2022. Contributed

We hear the “Sunshine for Scarlett” team raised the most money ($40,000) out of any single group that participated in last weekend’s Cystic Fibrosis Walk at New Canaan High School. Named for Scarlett McAllister, the team included many her fellow New Canaan Dance Academy dancers, all in yellow. In all, the Walk raised more than $100,000 for the very worthy cause, we hear.

The New Canaan Housing Authority is seeking to evict two people from a Millport Avenue apartment, in part, because one of them hadn’t been cleared to move in, as per the lease agreement, court records show. Also, a male tenant named in the complaint uses the community dump runs for other people’s garbage as part of his own dump-run business, smokes prohibitively close to buildings, allows his dog to roam and doesn’t pick up after the animal, according to the March 28 complaint.

Finally, some more details about this year’s May Fair: