Town officials announced Tuesday that a longtime member of the New Canaan Planning & Zoning Commission has submitted her resignation from the appointed body, effective immediately. 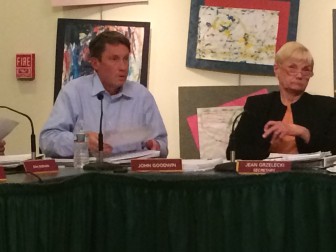 Jean Grzelecki has served on P&Z for three decades, and has been elected secretary for the past several years.

She’s been “a fabulous, dedicated and very thoughtful Planning & Zoning commissioner,” First Selectman Kevin Moynihan said during the Board of Selectmen’s regular meeting, held via videoconference. “I have enjoyed working with her for the past several years and I think everyone is going to miss Jean’s contributions.”

The selectmen voted 3-0 to appoint Arthur Casavant to a three-year term filling Grzelecki’s regular seat on P&Z, through Dec. 1, 2023.

Grzelecki’s positions on P&Z in recent years have included leading its Plan of Conservation & Development implementation committee as well as its Sign Committee.

Unafraid to question applicants or raise concerns about plans for expansion, reuse or redevelopment, Grzelecki through 30 years of service has bridged eras on P&Z, most recently from the chairmanship of former member and architect Laszlo Papp to current Chair John Goodwin and several recently appointed members. In recent years, she has weighed and weighed in on several major applications—some approved, others denied, all modified and conditioned—regarding the YMCA, Merritt Village, Grace Farms and Roger Sherman Inn. One focus area for Grzelecki has been the downtown, and she has consistently advocated for modest improvements and adherence to design guidelines. Among members of P&Z, Grzelecki ranked among the most consistent in personally visiting and walking properties whose owners made applications to the Commission.

Goodwin when asked about Grzelecki said her stepping down was “a big loss to the Commission and to me personally.”

“Her 30 years of service was exemplary,” he said. “She not only did her homework at the meeting level, but also her due diligence in site visits and she was at Town Hall frequently helping the planners over the years. I will miss her counsel and collegiality.”

Selectman Kathleen Corbet said, “Jean has been a great contributor to our town and to the Planning & Zoning Commission. Thirty years is quite a legacy and we wish her well and with grateful appreciation for all that she has done for our town.”

Selectman Nick Williams called P&Z “one of our hardest-working commissions.”

“P&Z is a tough job,” he said. “Eternal thanks to Jean for her service. It’s incredible.”

6 thoughts on “‘A Big Loss’: P&Z Commissioner Jean Grzelecki Steps Down after 30 Years”