Droves of gearheads make their pilgrimage to our town to showcase and drool over antique, muscle, sports and luxury cars, while guzzling Zumbach’s coffee. I was lured to the most recent event in September by my brother-in-law, a Riverside resident and a regular Caffeine & Carbure-teur, who promised that I would have a blast. I mean, what’s not to love—I enjoy coffee and I do love carbs. 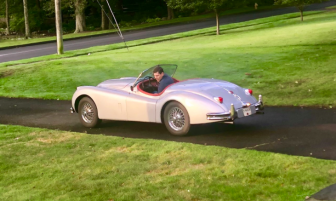 Brother-in-law backing up his 1954 Jaguar XK140 into my driveway. Credit: Susan Gelvin

In order to prep for my first C&C, I had to break my sacred Sunday morning sleep-in protocol, which is not my idea of a blast. However, I did feel excitement brewing as boastful engines could be heard ripping down South Avenue as they headed to the main event. On cue, my brother-in-law breezed up in his elegant 1954 Jaguar XK140. He took the time to reverse into the driveway, in a vehicular “come-hither” way (men really do love to drive in reverse or back into a parking spot – I am not sure why, but they do) and off we went. The swanky, two-seat convertible was not equipped with seatbelts, or anything else, so I held onto the holy “shoot” bar on the dashboard to keep from sliding into the driver’s lap or out the window. As we picked up speed along South Avenue, I leaned my head out of the window like a blissful Labrador and lapped up the air. 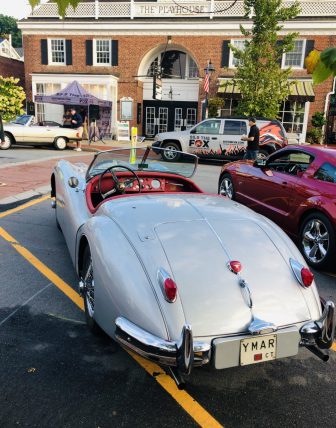 Our legal-for-the-morning parking spot along the crosswalk. Credit: Susan Gelvin

Upon arriving in town and gaining control of my hair situation, we were waived toward Elm Street, the second-tier location. It was a little disappointing that my “I’m with the press” move did not get us access to the more desirable prestige parking in front of Zumbach’s coffee house.

We were shown to our humble spot, smack-dab in the crosswalk, which is ironic because New Canaan is normally plagued on a daily basis by those who feel entitled to park wherever they chose. So, for the record, if you want to park like a jerk in the middle of town, do it in an antique car at 7:30 a.m. on the Sunday of Caffeine & Carburetors: it’s expected and approved. 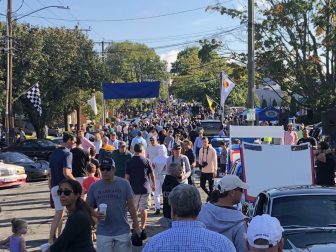 As we slinked out of the Jag, I was able to take in the downtown scene and it was shocking: The streets and sidewalks were packed with men.

Yes, cool cars were everywhere, but the number of men was astonishing—they far outweighed the number of women… and cars. Oddly, there were more canine companions than women, too. So ladies, if you’re single and looking for a loveable, caffeinated gearhead, you are wasting your time sleeping in on a C&C Sunday, when it’s raining men in New Canaan. And we’re talking all kinds of men with all kinds of interests—some were even clad in head-to-toe leather, and that is no easy feat in 85 degree weather.

Coffee shops were jammed and doing tons of business. Nearly everyone had a coffee-to-go cup in hand. Retailers might have opened as a public service to provide bathrooms for visitors—so much coffee, yet so very few places to relieve oneself. 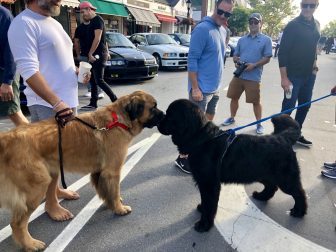 Bill the Newfie (on the right) making friends and drawing a crowd. Credit: Susan Gelvin

After leaving Elm Street and heading toward the main event near Zumbach’s, we were joined by a huge, loveable Newfoundland dog named Bill. Forget the slick Bugattis and the brand new Pantera (which, to my surprise, was not the character from the 1980s animated series, The ThunderCats), Bill the Newfie garnered the most attention. And in my opinion, deservedly so. Again, single ladies, there are countless men with dogs…and cars. There is so much love lurking around and it’s being served up on a leather platter.

By 10 a.m., I was ready for lunch and a nap (and so was Bill). I had such an enjoyable morning wandering around people-watching, car-watching, dog-watching and running into friends who make the effort to attend every Caffeine & Carburetors. Overall, the event has become a great tradition for New Canaan as it draws such a positive, upbeat and diverse crowd to our town (and by diverse, I mean me).

The next Caffeine & Carburetors is scheduled for Oc. 20 at Waveny. This gives everyone a few weeks to free themselves up, to buy an antique sports car, or to adopt a Newfoundland.

Also, if there is a massive influx of women at the next event, you’re welcome, fellas.