So, that was Halloween. Meh.

I was expecting a bit more excitement for top-billing on a Saturday night, a Blue Moon and a bonus hour to sleep off my sugar hangover. Clearly, I was not fully prepared for this year’s low-key Halloween. 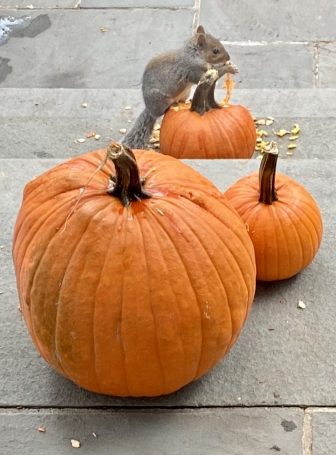 If I had to assign blame for over-hyping last weekend’s festivities, I would point my finger squarely at the insane number of squirrels that have been celebrating Halloween on my front doorstep for weeks. Exploding out of quarantine in record numbers and with an unrelenting appetite for destruction, my furry frenemies have been rubbing their Halloween fun in my face for a month now.

In early October, I purchased six overpriced, but locally sourced, pumpkins that perfectly expressed my positive, and hopeful, fall holiday vibes. And with the intent to finally prove to myself that creating an autumnal mise-en-scéne could be nearly effortless, I arranged (and rearranged) the gourds to look natural and not too fussy.

Yet in the end my time and burgeoning talents were wasted on creating a smorgasbord for ravenous, disorderly squirrels. These pumpkin murderers used my stoop as their personal thunderdome to fight over, and devour, my thoughtful arrangement of decorative vegetation. 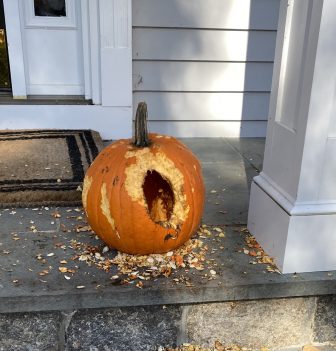 And then there was one. Credit: Susan Gelvin

Naturally, I couldn’t stand by and let tree rodents ruin my earthy decor. This turf war was on.

After noticing the initial squirrel activity and their increased loitering, I doused the pumpkins with Cholula hot sauce and naively hoped the vermin would be repelled by the super spicy glaze. Not a chance. It seems that the hot sauce only increased the appeal and attracted even more grazing.

So, channeling my grandfather, a man who once successfully chased down a bear to retrieve a stolen loaf of bread (true story), I decided to up my game and stand my ground, like a real Pescatello. Maniacally, I sprinkled a container of hot chile flakes all over the rodent-carved jack-o’-lanterns, only to find that my squirrels had a seemingly strong penchant for Mexican cuisine and an unheard of tolerance for spicy food.

For weeks, our front porch looked like the scene of a heinous (and fibrous) crime—pumpkin guts strewn about and dismembered stems discarded in the yard like empty beer cans after a Halloween rager.

The squirrels had made Swiss cheese out of the largest gourds and the others were gnawed into oblivion. Defeat was mine and my turf was now theirs. Even the dog gave up chasing them away.

Most unsettling, and weirdly intriguing, were the pools of blood found next to the maimed pumpkins. Initially, I feared that the hot sauce and chile flakes had induced bleeding ulcers. Then, my husband suggested that a clever hawk could have swooped down and attacked the gluttonous squirrels—which got me thinking that I could be sitting on National-Geographic-gold if an epic, interspecies battle scene had been captured on our doorbell video camera. So, I reviewed an embarrassing amount of wildlife footage and embarked on my own Crime Scene Investigation.

From what I could visually piece together, besides a Benny Hill-worthy animal chase that ensued outside my door, there was little explanation for the blood, other than squirrel-on-squirrel violence. The footage simply confirmed that 2020 is indeed the Year of the Rat, the Tree Rat in this case, and Halloween was all about them–not us.

The energy I wasted on preserving my pumpkin-scape took away from the time I could have devoted to engineering a candy trebuchet or a two-story treat chute. Though it didn’t really matter anyway. Due to a sporting event, we missed most of the two-hour window that our neighborhood had carved out for trick-or-treating. My kid’s later attempt at hitting up South Avenue residences for some free sucrose was understandably met with darkness. The group reported back that it was “dead out there” and they could only make out one other reveler in the distance—the faint outline of a giant inflatable dinosaur sadly walking into the night.

Naturally, I am convinced the dinosaur was actually a mutant super-squirrel responsible for gobbling up most of the pumpkins around New Canaan. Squirrels are having all the fun—that’s so 2020.