Emergency responders shortly after noon on Monday were dispatched to a residential construction site on Carter Street where a worker suffered a fall. 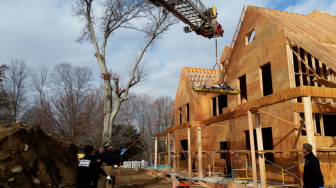 Emergency responders on Nov. 30. 2015 lower a man from the second floor of a home under construction on Carter Street. There were no stairs at the home, where the victim fell one floor, officials said. Photo published with permission from its owner

The victim was on the second floor of a home under construction at 252 Carter St., near the intersection of Hickory Drive, officials said.

There were no stairs at the home, officials said. Police Lt. Jason Ferraro, the department’s public information officer, confirmed that the Occupational Safety and Health Administration was contacted following the accident and the federal agency is expected to conduct its own investigation. 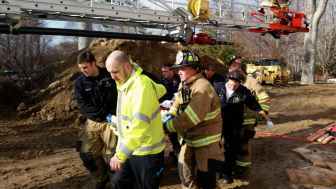 Once lowered, the victim is transferred to a NCVAC ambulance following a Nov. 30, 2015 accident at 252 Carter St.. Photo published with permission from its owner

The New Canaan Volunteer Ambulance Corps, Police Department and Fire Department received notification of the accident at about 12:07 p.m.. The emergency responders got to the scene, stabilized the victim, removed him through a second floor window and lowered him to the ground, officials said.

He was taken to the Emergency Department at Norwalk Hospital, officials said. 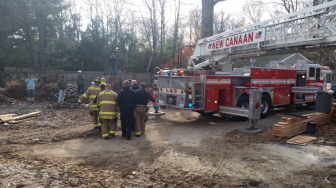 The victim is tended to by emergency responders following a Nov. 30, 2015 accident at 252 Carter St. Photo published with permission from its owner

A 1952 ranch-style home on the 2.3-acre property was demolished in February and the town in July issued a building permit for a new, 8,000-square-foot house on the property, tax records show.

The man’s specific injuries and condition were not immediately clear.