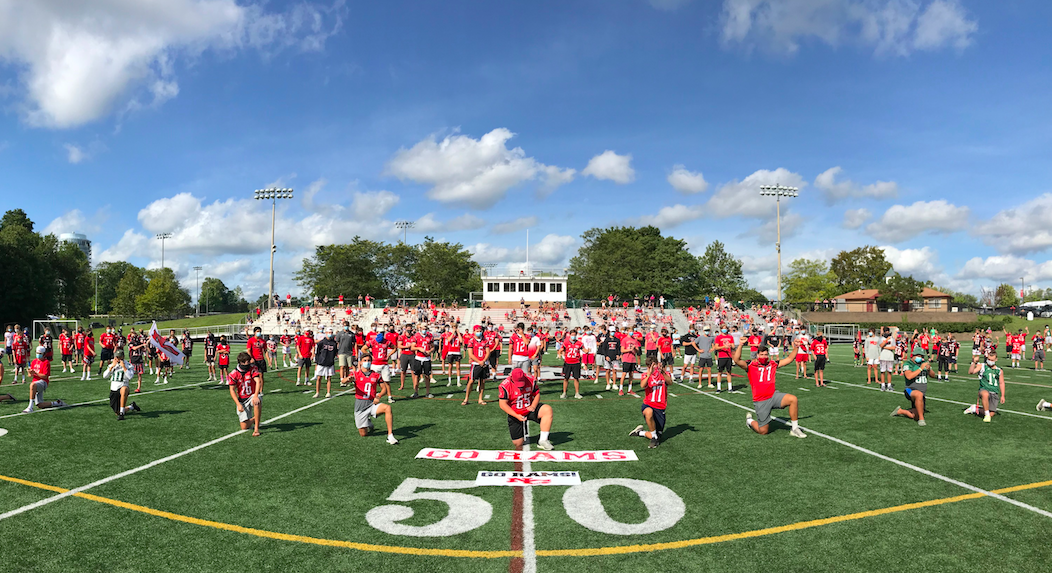 The gathering at Dunning Stadium on the morning of Sept. 7, 2020. Credit: Michael Dinan

“As such, the CIAC Board of Control, in alignment with DPH recommendations, has determined that high risk full contact football is no longer a viable option,” the CIAC said in a press release. Instead, it’s looking at the “appropriateness” of a 7-on-7 football model, as opposed to the normal 11-on-11 game.

Those gathered at Dunning Stadium on a sunny Labor Day morning pushed for the traditional game, with safety precautions.

“The game of football is not just about winning games and putting points on the board,” Mike Benevento, president of the New Canaan Athletic Foundation, told NewCanaanite.com as dozens of football families filed into Dunning for the socially distanced show of support.

“The game of football is about camaraderie. It’s about lessons that you have with your teammates and things that you learn off the field more than on the field. And for those of us that have played the game, even at the highest level, through college—we have NFL supporters in Zach Allen and Lucas Niang, that are telling us your senior year of your high school football season is a time that you’ll never get back and that you will remember forever, regardless of what level you played on. It’s that important to these kids, it’s that important to these families and if you played the game, you understand that. And we want to do it in a safe and healthy and effective manner, in accordance with the data, in accordance with the science and in accordance with the guidelines that the state laid out at the beginning of the year, at the beginning of the summer that allowed many of us to play all kinds of sports all summer long.”

A handful of football players from Fairfield, Norwalk and Westport joined the New Canaan players at midfield for a photo. Several media members snapped photos. Nearly everyone wore a mask. A drone buzzed overhead.

Town resident Tom O’Dea, a state representative and longtime New Canaan youth football coach and parent, said, “My whole M.O. on this is the curve is flat. With the CIAC—we did everything right up until June, July. We have had sports up and down the East Coast. Lacrosse, soccer, football 7-on-7 and hockey. There were no spikes. So the CIAC and DPH were in alignment on how to handle this, right up until CIAC announced what we are doing and then DPH the next day changed their mind. And they gave us no facts to support why they changed their mind. We asked what metrics do you believe we need to go forward in January that we do not have now? And they have not answered that question.”