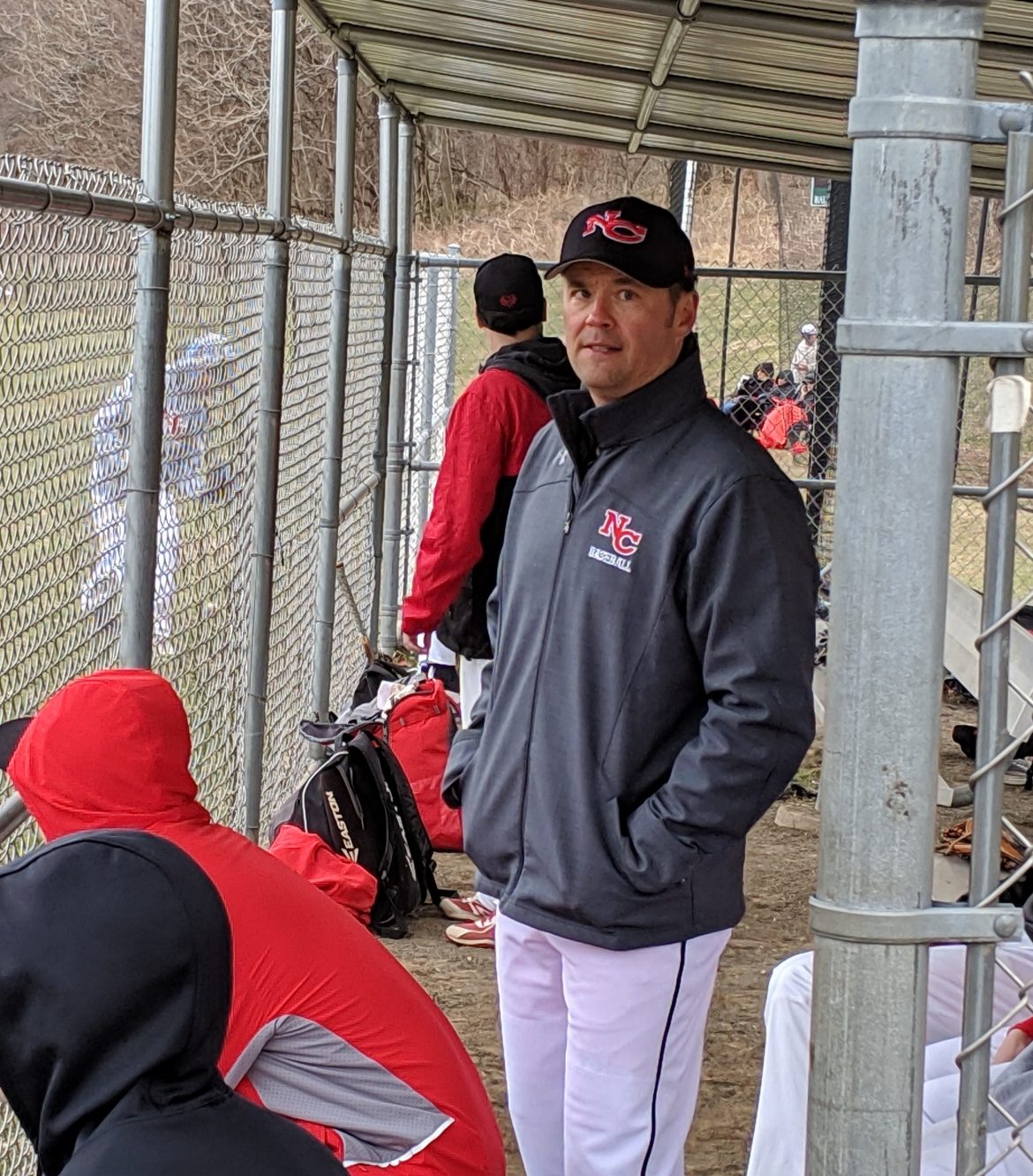 A love of baseball has flowed through Anthony Bloss since he was five years old. That’s when Bloss made his way up a tunnel of the old Yankee Stadium and caught his first whiff of the freshly cut, bright green grass which surrounded the diamond.

It made his young boy’s eyes sparkle, Bloss recalled on a recent morning.

When Bloss arrived as a math teacher at New Canaan High School in 2005, one of the first things he did was seek out then-longtime head varsity baseball coach Mark Rearick to express his interest in helping the baseball program in whatever way he could. 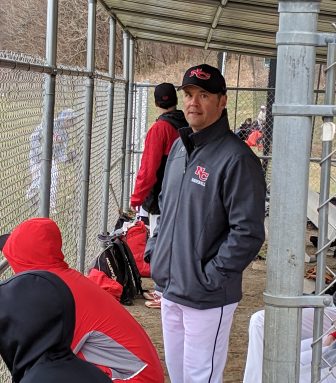 And over the better part of the next 14 years, Bloss did just that. He served as an assistant coach to the freshman team from 2006 to 2008, led the JV program from 2009 to 2015, and worked his way up to the varsity level to be an assistant to head coach Geoff Lambert in 2018.

When Lambert stepped down as head coach after that season, the opportunity arose for Bloss to lead the program.

“I thought really hard about applying for the job because it had been something I’d wanted with how long I had been with the program,” Bloss said when asked why he decided to apply to be head coach of New Canaan Rams baseball. “The way I worked my way up, I felt I was more than qualified for the position given all the experience I had with New Canaan Baseball.”

After consulting with both his wife and three daughters and gaining their support to go for it, Bloss threw his hat into the ring. And in December 2018 he was offered the position.

“I had always envisioned myself, eventually, becoming a head coach at the varsity level,” Bloss said. “I knew that it would probably take some time, which it did. And that’s fine. That’s part of the process of how these things work. I honestly don’t think I would’ve been ready for it earlier on in my career because I think I needed the experience I’ve gotten. But after 14 years of being a part of this program and working at all three levels of it, I think I have a better appreciation for what this job entails.” 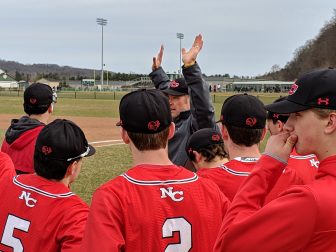 And that experience makes Bloss aware that for New Canaan Baseball to succeed at the varsity level going forward, it needs to succeed at all levels—starting with its youth.

“My goal for our program is, eventually, to have a vertical trajectory for it where those who begin their involvement at the youth level are exposed to what we’re doing at the high school level and vice versa,” Bloss said. “This was something that Coach [Mitch] Hoffman started as far as keeping kids at the youth level interested in playing. So to take it a step further, I’m trying to become more involved and have an open line of communication with the people involved with the game at the youth level.”

Delivering on this course of action, Bloss and his coaching staff have already attended an open house with parents of prospective Rams to explain to them about his vision. They also attended their preseason evaluation days, which the current varsity players helped run.

“I think it’s important for me and my staff to have a presence at events like that because not only do the kids see that us varsity coaches and players have interest in what they’re doing, but the parents and coaches do as well,” Bloss said. “That’s when they need to be learning the game [at the youth level]. It’s like learning a language, if you learn it when you’re young you find it much easier to become fluent in it than learning one when you’re much older. There’s a lot of work to do but I want us to have sustained success and build the program to a level where opponents see us on their schedule and know they’re facing a quality team.” 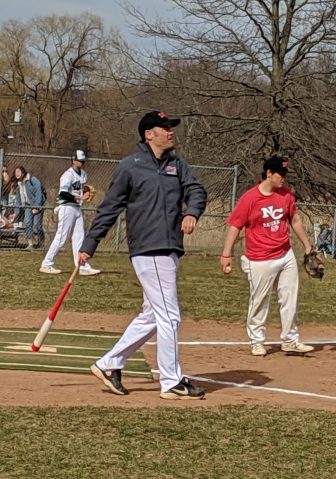 It is this vision which won over Athletic Director Jay Egan and the rest of his peers on the hiring committee. The position was coveted by several people and after an initial round of interviews, the field was narrowed down to two—Coach Bloss and another person with a rich baseball background.

“And I think the vision he detailed was what separated him for us,” Egan said of Bloss’s second interview. “And that stems from his time as a teacher. So he viewed this, I guess, from two lenses—his knowledge of baseball and his understanding of teaching and learning. His ability to integrate his understanding of teaching and learning from the youth level all the way to the teams at the high school—that approach will ensure that on a yearly basis there are players who come to the program here with the knowledge and skills to be successful. I think this will bring the entire New Canaan Baseball community together.”

Being a member of the New Canaan High School community as well is something Bloss feels will help him succeed in this role, as it provides him an opportunity to see his players in a setting other than the baseball field.

“I’m here every day and that allows me to know how these kids operate academically as well,” Bloss said when describing the advantage of being a teacher at the school where  he coaches. “I’ve learned how to effectively teach and motivate young people as a part of my development in my profession. For me, having the knowledge and all the education I’ve attained on how to effectively motivate, and get kids to want to learn, helps.”

And it is that desire to motivate kids which has Bloss excited about the opportunity he has in front of him, he said. So much so that when he was first introduced to the team as its head coach, Bloss caught himself choking up. Which was “weird” for Bloss to feel because he “talks to kids every day,” he said.

But that is emotion which stems from a passion for what you do. And it’s that passion which has Egan confident the program is in good hands.

“When you infuse his love for New Canaan High School and passion for baseball into the kids, it bodes well for their future success,” Egan said. “He’s a very popular teacher and a very good teacher. You don’t make something your life’s work without having that inner drive for it.”

The group Bloss leads on his maiden voyage as head coach in 2019 is one he is quite proud of. It consists of “hardworking, caring” individuals, ranging from freshmen to seniors, who have very different personalities but, collectively, have gelled in the short time they have been together. 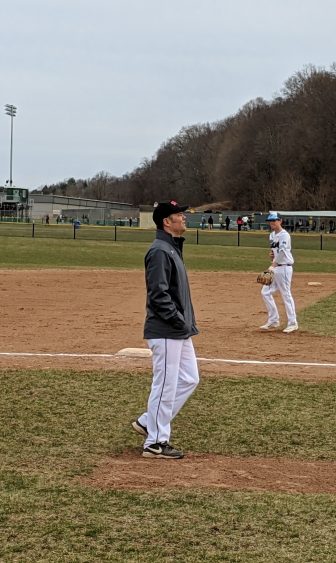 Senior tri-captain Andrew Jordan, who enters his second year playing for his head coach, is honored to be one of three who have been given the distinction of captaining Bloss’ first varsity squad.

“Coach is someone who cares about all of us and wants us to succeed as much as we all do,” Jordan said. “I know he’s going to continue to teach us a lot as the season goes along. And we want to make sure we get his head coaching career off to a good start.”

Bloss secured his first victory as head coach on Tuesday when New Canaan defeated New Milford, 11-2. But as the Rams get set to take the field at Mead Park for the first time this year Thursday, and begin FCIAC play next week, Bloss knows significant challenges lie ahead for both him and his team.

But ever since he was introduced to the game as that five-year-old boy at Yankee Stadium, Bloss has loved the challenges baseball presents.

“I just love the competition. Like, today’s a game day and I’m fired up—I can’t wait to get on the field. That kid in me hasn’t died.”