Michael Esposito, an active volunteer firefighter here since 2011 and first lieutenant in the New Canaan Fire Department, doesn’t see many people during the first part of his shift with the Parking Bureau. 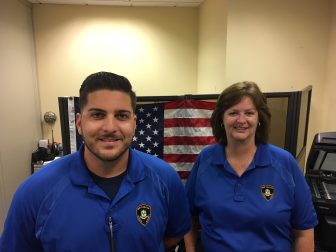 In the mornings, he oversees the outskirts of downtown—primarily the long-term lots around the train station. Yet in the afternoon he gets to the business permit and pay station lots—such as Locust Avenue and Center School—and in interacting with members of the community then, Esposito said he likes “to educate them before I give them a ticket.”

“I will catch people a lot of times pulling into a space and walking past the meter, or pulling into a loading zone and not looking at the signs, and I will catch them and tell them ‘Hey listen,’ and try not to give them a ticket. I try to educate them. I feel like that’s something a lot of people don’t know: I’m not out there to ticket people.”

He added: “I took this position because I thought it would be a better opportunity to serve the town, help the town.”

Together with Marianne Borchardt, Esposito is the newest member of the Parking Bureau. He joined as a full-time enforcement officer in May, while Borchardt—a former daycare center employee who had worked with a county sheriff department in Florida as a crossing guard—started part-time in May. Borchardt covers Main and Elm Streets as well as parking lots close to the town center, such as Morse Court, Park Street and the Playhouse.

Asked for their first impressions of New Canaan motorists, both had very positive things to day—though education about the parking rules in town are not as widely understood by locals as they could be.

Parking in loading zones, crosswalks and handicapped spaces are among the most common offenses among New Canaan violators, Borchardt said.

Like Esposito, she said it’s a priority to head off a parking violation before it occurs if that’s possible.

“I get them before they get out of the car, ‘You don’t want to park there,’ ” she said.

Led by Parking Superintendent Stacy Miltenberg and the Parking Commission, the bureau has implemented a number of changes in recent months that are designed to aid both motorists and local businesses that benefit from increased availability of spaces. New parking machines have been installed in downtown lots and the town created a new type of permit for employees of local businesses that are designed to free up spaces for shoppers and diners. The bureau also took on a major project in “cleaning” its commuter lot waitlists and is now publishing and updating those lists online while enforcement officers have bolstered their “on the ground” presence downtown by riding bikes at times, in lieu of riding in vehicles.

Miltenberg said the new enforcement officers are working seamlessly into the team.

For Esposito, the small group responsible for enforcing parking rules “can only write the tickets that we see.” “And every day, I try to help people out. I try to educate people where to park, where not to park, where to stay away from—the rules of the streets,” he said.