For many New Canaanites, the high Christmas season launches with the Holiday Stroll and first Sunday of December, when firefighters deck the fire house, and runs through Christmas Eve caroling at God’s Acre and Dec. 25 church services and family dinners. 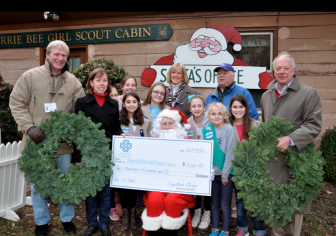 Two important pieces of favorite local Christmas traditions emanate from Kiwanis Park, where the Exchange Club for some 40 years has sold wreaths and trees alongside Santa’s Workshop, where local kids meet the big man on weekends.

So when it was discovered suddenly two weeks ago that the fuel oil tank which heats Santa’s Workshop (at the New Canaan Girl Scouts Merrie Bee Cabin) had deteriorated irreparably, raising the prospect of a Workshop-less holiday for scores of locals, it represented a problem not just for the Exchange Club and Girl Scouts, but the community at large.

Enter the New Canaan Community Foundation, which immediately issued a $2,600 emergency or “out of cycle” grant to cover most of the cost of a replacement tank.

“It’s Santa,” said the nonprofit organization’s executive director, Cynthia Gorey. “It’s already cold enough at the North Pole. He needs to be inside when he sees those kids.”

An example of local charity—and a grant that, by extension, helped the Exchange Club during a major fundraiser that itself also benefits community groups—the NCCF’s swift action truly helped “save Christmas” for scores of local kids.

“It was huge, because we didn’t have the money,” said Marigrace Dubas, chairman of the New Canaan Girl Scouts Merrie Bee Cabin Committee, a volunteer group.

The cabin is used mainly by the Girl Scouts for their events and for the month of December traditionally is rented out to the Exchange Club.

“They [the Exchange Club] use the cabin for Santa’s Workshop, so they need heat,” Dubas said. “We needed to act right away, because winter was coming and we would not have been able to continue serving the Girl Scouts if we had to close the cabin because it couldn’t get any more oil.”

Exchange Club President Bob Clay said Santa’s Workshop is “part and parcel” of the tree and wreath sale, a major fundraiser for the club.

“It’s an important part of our model, and it woud have been a loss if we were not able to do it this year,” Clay said. “It’s very Christmassy.”

(The Exchange Club this year had its highest-grossing sale ever, Clay said, with the majority of its own fundraising going to the Parenting Skills Center for the Prevention of Child Abuse.)

For Gorey, the emergency grant—made possible by an endowment supported entirely by donors—is a good example of how NCCF serves the community. Designed for completely unexpected situations, past grants have gone to New Canaan Library when its downstairs was flooded and carpeting and baseboards needed quick replacement, when the Merrie Bee Cabin needed a furnace several years ago and when the ABC House suffered storm damage that wasn’t covered by insurance, Gorey said.

“We have been here since 1977 and have built an endowment since that time, so our board has the discretion to use that endowment to support all of our operating costs as well as to use that endowment to support out-of-cycle grant-making—and not necessarily take away from the 2015 budget, because we are making an unexpected grant at the end of 2014,” she said. “We really are so fortunate that the people of New Canaan have been generous for so long that we have an endowment that allows us the flexibility to not only pay administrative costs and help people in a pinch—that is what lets us give away 100 percent of every contribution.”

It’s critical to the New Canaan Community Foundation to be able to pivot quickly to the town’s needs as they arise, she said.

And in this case, help “save Christmas” here in town.

“It doesn’t get any better than that for local charity,” Gorey said. “It’s all about our town.”

One thought on “‘It’s All about Our Town’: New Canaan Community Foundation Helps Save Christmas”