After 32 years of dedicated service, art teacher Jeanne McDonagh is retiring at the end of this school year. 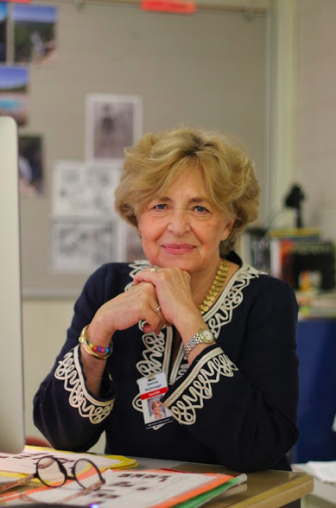 Known for completing numerous projects not just within the high school but throughout the whole community, McDonagh once hosted a photo exchange with Afghan girls who forbidden from taking photos by the Taliban, filmed videos for the entrance of the Glass House and created a mural for the school cafeteria.

“I started to put up anything that was posted in the newspaper about what we are doing in the arts on a bulletin board outside my classroom,” she said. “There is no room on the board because we just keep adding what we have shared with the community and connecting with them on a lot of different levels.”

Seven of McDonagh’s students have earned National Scholastic Art Awards and she has been honored by the New Canaan Museum & Historical Society as one of 19 local women to have made a major difference in New Canaan. 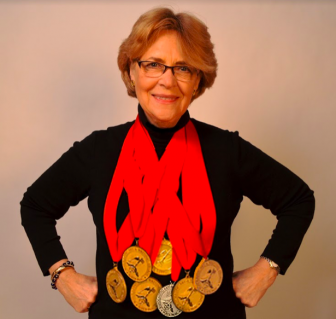 “I always say ‘yes’ when someone asks if I want to be involved in something,” she said. “It opens up a world and you learn, you do, and you work. The results are always very surprising.”

McDonagh started her career in art as a teacher in New York City.

“I walked into the classroom and thought these kids were so lovely and polite,” she said. “What I didn’t know is that no one spoke English. My Spanish is terrible. That was not going to work for me.”

After a few days of working in New York City, McDonagh started working part-time at a college and soon interviewed for a job at the high school as an Art Experience and Drawing teacher.

“When you become an art teacher, you need to teach everything whether it be drawing, painting, or ceramics,” she said.

McDonagh said she will miss her students the most because they love learning and she loves teaching them. 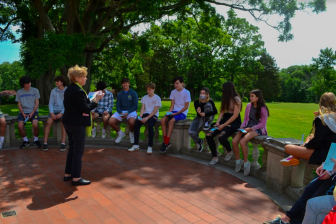 Jeanne McDonagh with students on the balcony at Waveny House. Contributed

“I’m going to a black-tie wedding for a student that came into my class his senior year because he needed an art elective,” she said. “It opened up a new world for him, and now he has a career in photography. To see my students grow is just exciting. They will also teach me things as technology changes. They’ll pursue something or learn about a particular artist that I haven’t known. They’re more savvy with what has changed this year. It’s been a real evolution.”

Jennifer Sinski, an art teacher and colleague in New Canaan Public Schools, said she was in awe of McDonagh on meeting her during an interview.

“On my way down South [Avenue], I saw a woman in a blazer and she had this scarf around her neck,” Sinski recalled. “She looked so important, confident, and beautiful. That woman I saw walking down the street was Jeanne McDonagh. She’s such an inspiration and she really left her mark on me.” 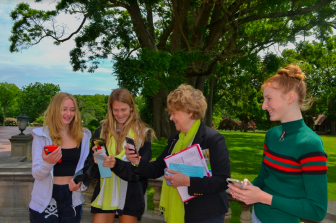 Jeanne McDonagh with students on the balcony at Waveny House. Contributed

Sinski said McDonagh has a contagious positive attitude and outlook on life every day.

“She was so encouraging on the first day I ever met her,” Sinski said. “She just has a way of seeing potential in a student and making them feel very supported. She pushes them in a positive, very safe way to help them express themselves.”

Darcy Smith, an English teacher, said she immediately pictures McDonagh installing art exhibits in the main lobby when she thinks of her.

“Her friendship transcends age groups, and I have always felt that I have a friend in her although our classrooms are at opposite ends of the building,” Smith said. “As an artist herself, she is the consummate model as a mentor, a friend, a colleague, and a creative spirit.”

“I had the pleasure of doing her daughter’s wedding flowers several years ago, and I was so flattered that an established artist would trust me and my floral design skills for such an important event,” Smith said. “I have to imagine that this is how all of her students feel: encouraged by her regardless of age, time and space.”

Assistant Principal Ari Rothman said that Ms. McDonagh is committed to cultivating the talents of her students and producing a high-level art program. “She has been a leader and an innovator,” he said. “She has been a foundational person, in terms of not just art education but art appreciation, in the school and the community.”

Apart from the guacamole McDonagh makes for art show openings, Rothman said there isn’t a single moment that stands out between them because they have known each other for over 18 years.

“I have a great deal of affection for her,” Rothman said. “I’ve always been a fan of her on a personal level as well as on a professional level. She’s an excellent team member, in terms of making sure the art program here is always of the highest quality.”

McDonagh said she plans on continuing to work on art while she is retired, and has built a studio at her house.

“It used to be a sheep shed, now it’s a she-shed. I will continue to work and get involved in the community to connect,” she said. “I’m a workaholic. There are such great things to continue.”

McDonagh said her final message to the high school is: “Keep those paintings straight. Everything in the hall is something that I have hung up by myself, so keep them straight.”

Aleena Nasruddin is a rising senior at New Canaan High School Class and editor-in-chief of the school paper, the NCHS Courant. This article first appeared there.