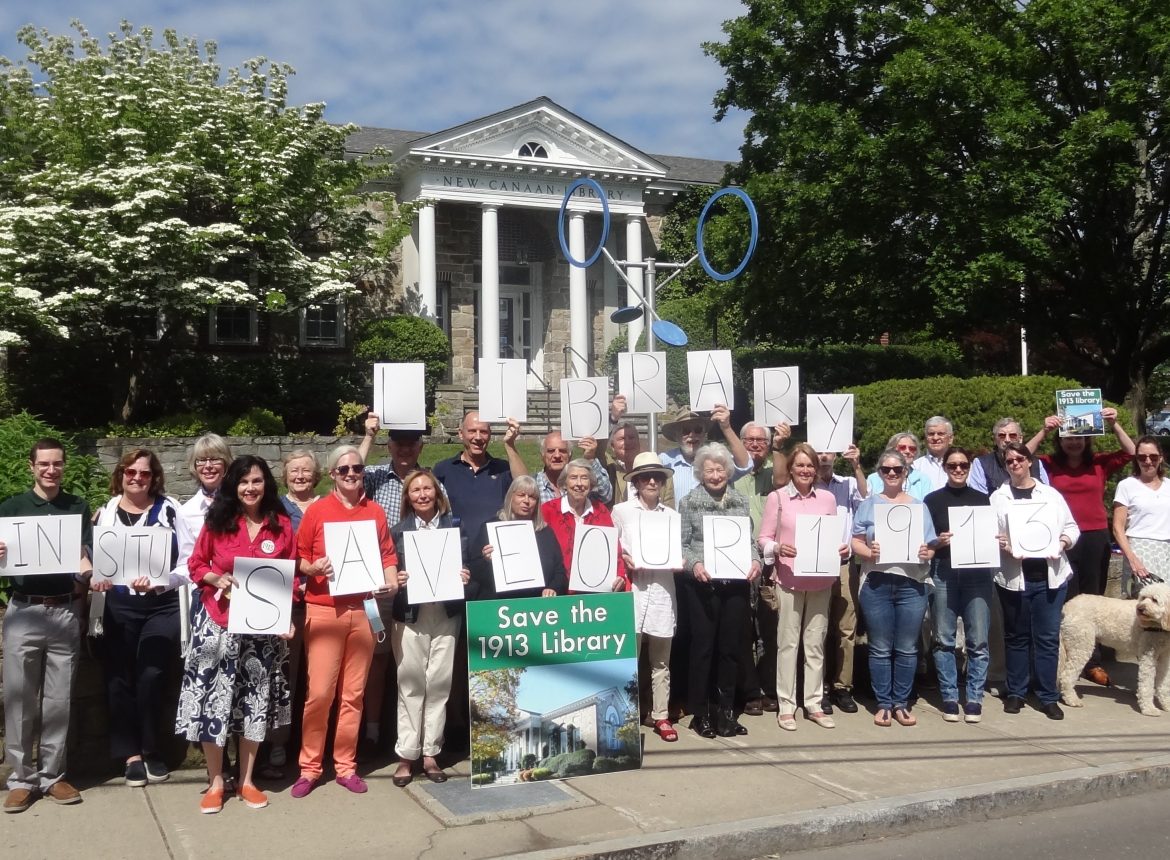 Noting that she’s received “a lot of blowback” about appearing in a photo with preservationists gathered out front of New Canaan Library over the weekend to support keeping the 1913 building, Selectman Kathleen Corbet on Tuesday said she will respect whatever the Planning & Zoning Commission decides on the library’s application to rebuild its facility, even if that means demolishing the original structure.

In a possible reference to the library’s offer to move the Main Street-facing facade to a western property line, Corbet said she has been “impressed with some of the ideas that have been put forward by the library in terms of moving and paying homage to the 1913.”

“But the simplest one would be to preserve it in place,” she said during a regular meeting of the Board of Selectmen, held at Town Hall. “But again, I think making sure that every voice is heard and we are considering that, that’s what I respect, the process from Planning & Zoning. And whatever they decide, I support—even if it includes demolition. So that’s the process I have always taken. I am consistent with that.”

Her comments came during an agenda item dedicated to general matters before the town.

On Sunday, 27 people and one dog were photographed on the sidewalk along Main Street in front of the library with a “Save the 1913 Library” banner and individual letter signs that read “Save Our 1913 Library In Situ.” Several members of the New Canaan Preservation Alliance and Friends of Our 1913 Library group appear in the photo, as well as Corbet and Town Councilman Penny Young, an elected official. Ed Vollmer, a member of the town-appointed Historical Review Committee, also is in the photo.

The library project, 1913 building and draft agreement between the municipality and library that sets the terms of a $10 million town contribution all are effectively out of the hands of the Board of Selectmen and Town Council. P&Z is scheduled to hold its seventh hearing on the project June 29. The Board of Finance and library are expected to sign off on the draft Memorandum of Understanding.

The library’s plans call for a 42,641-square-foot facility oriented toward South Avenue and Maple Street and a ‘library green’ that includes the parcel where the original 1913 building now stands.

Many proponents of the library’s project have said the green is an essential part of the overall plan, while many preservationists have tried to reframe the discussion by downplaying the green’s use and importance, and saying the new building can coexist with the old one so long as it’s restored and left in place.

Corbet herself has not taken a position on the matter, though she has urged the library and preservationists to find common ground.

Corbet said she attended the preservationist gathering Sunday as part of her regular duties as a selectman to accept invitations to such events, as she had done with a walk-through of Kiwanis Park the prior Sunday.

“One of the, I guess, advantages or potentially disadvantages of being a selectman is you get invited to attend lots of things, and I was invited this past Sunday to meet in front of the library with supporters of the 1913 library,” she said. “And so as I do get invited to things I do attend everything.”

She added, “If they invite me to anything, I show up.”

First Selectman Kevin Moynihan interjected at that point, saying in reference to the preservationist gathering, “I wasn’t invited.”

Corbet said, “I just want to say that I support—and I am consistent about this—first of all, I support the Planning & Zoning Commission and the work they are doing in terms of a determination of the future of library and the 1913 library. And second, I absolutely support the new library and always have. We’ve been donors to the capital campaign and continue to support that. Third, I also support preservation and this is about that, as well.”

Corbet also referenced two “working group” sessions held April 29 and May 7 that included library officials as well as preservationists and members of the town funding bodies. She acted as a “facilitator” of the sessions—which were designed to help find a solution between the two sides, but did not—not a “mediator,” she said.

“Someone said, ‘Well weren’t you mediating?’ No I wasn’t a mediator, I was a facilitator of all the bodies that came together, including the town bodies, the library and supporters of the 1913 building,” Corbet said. “So that was the facilitation that took place in person. I have to say that it was very well done. Very impressed by all of the participants and I thank forth for their participation. So, just wanted to clear the air if there was any uncertainty. And I wanted to thank everybody for having an open mind to what will come forward.”

Corbet has announced that she will seek to retain her seat as selectman in the fall. It’s unclear whether the Board of Selectmen will have any contested races at the July party caucuses or November local election.