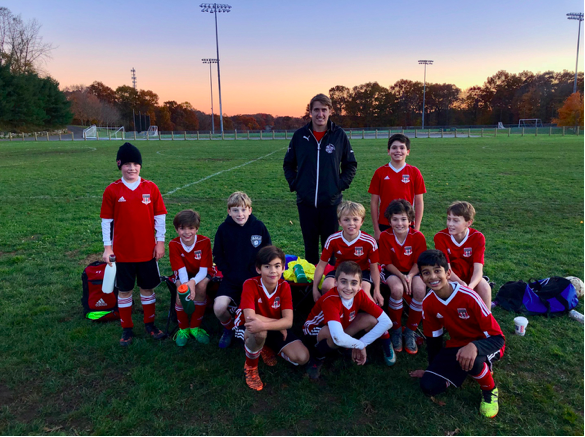 Indian Ridge Park, TRUMBULL—Well, it’s time to head to the voting booths Tuesday and I have a non-partisan, apolitical message that I believe we can all get behind: Vote for moms.

As the New Canaan Football Club U12 Boys Red team winds down another great season, I dedicate this article to all the moms out there scheduling, driving, car-pooling, organizing, and preparing these minnows for soccer games all over Fairfield County, the State of Connecticut and our wonderful nation. Without any fanfare and little recognition, these unsung heroes toil week in and week out to put our kids in a position to grow, learn about teamwork, deal with adversity and to succeed out on the playing field.

And this past Sunday, that’s what the boys from New Canaan did—with their playoff hopes on the line.

First, a quick back story.

The NCFC U12 Boys Red side is a small team both in stature and numbers. On a given week, we just have enough players to field two subs. This week, it looked like we might have to play shorthanded given scheduling conflicts. On hearing that, with the sophisticated high tech alert system instituted by New Canaan Moms, the team moms rallied to the cause. Have you ever seen moms in action at their best? Yes, of course you have. And on this weekend these moms scrambled in under 12 hours to “get the job done.”

One player had a family conflict and needed to be picked up and brought to the game; another managed to get back with his mom to New Canaan late the night before after a scheduled trip abroad. Problem solved and a full team with nine players but no subs.

And the moms’ efforts paid off with a rousing and critical W for the New Canaan boys. Javi Minuesa made the one save needed in the first half, while Oliver Sturn’s and Rohan Shenoy’s hustle and physicality on the back line shut down Trumbull. Several great runs by Dylan Ho, Alex Ertegino and Rogan Lowe led to scoring chances that were turned away by a talented Trumbull goalie. With Daylight Savings Time over, the sun began to set on the match early. But these Sons of New Canaan Moms’ play began to heat up just as the autumn chill began to set in. And after some great passing and attacking runs led by Drew DeGaetano, Gregory Martin and William Arnold, NCFC was awarded a pivotal corner kick. Arching high over the defense, Ho’s corner found Minuesa positioned perfectly at the far post and Minuesa finished with a brilliant header into the back of the net. 1-NIL with victory to NCFC, keeping the boys’ playoff hopes alive.

Thanks again, moms! I am Ed Ho, and I approve that message.