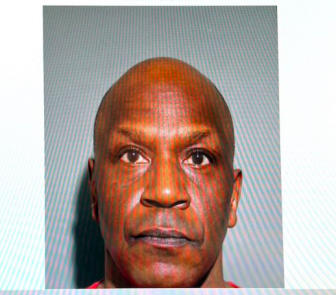 Dean Henton also was charged with five counts of first-degree failure to appear.

On three separate occasions starting last fall—on Oct. 7, Nov. 23 and March 15—businesses on Elm and Main Streets reported the thefts of employees’ wallets, purses, cash, clothes and credit cards from areas not open to the public, according to police reports. The value of the items stolen was about $470 the first time, $150 the second time and $955 the third time, the reports said.

Through an investigation, police identified Henton as the suspect and secured two separate warrants for his arrest, they said. They took custody of him at about 4 p.m. on April 16 at the New Canaan Train Station, the reports said.

He was held on $100,000 bond and scheduled to appear Monday in state Superior Court. When Henton arrived at court, an additional warrant was discovered in connection with the Main Street theft, and $50,000 was added to his bond.

According to Connecticut Judicial Branch records, Henton is facing the following charges:

The man has an extensive criminal history. According to court records, past convictions include: