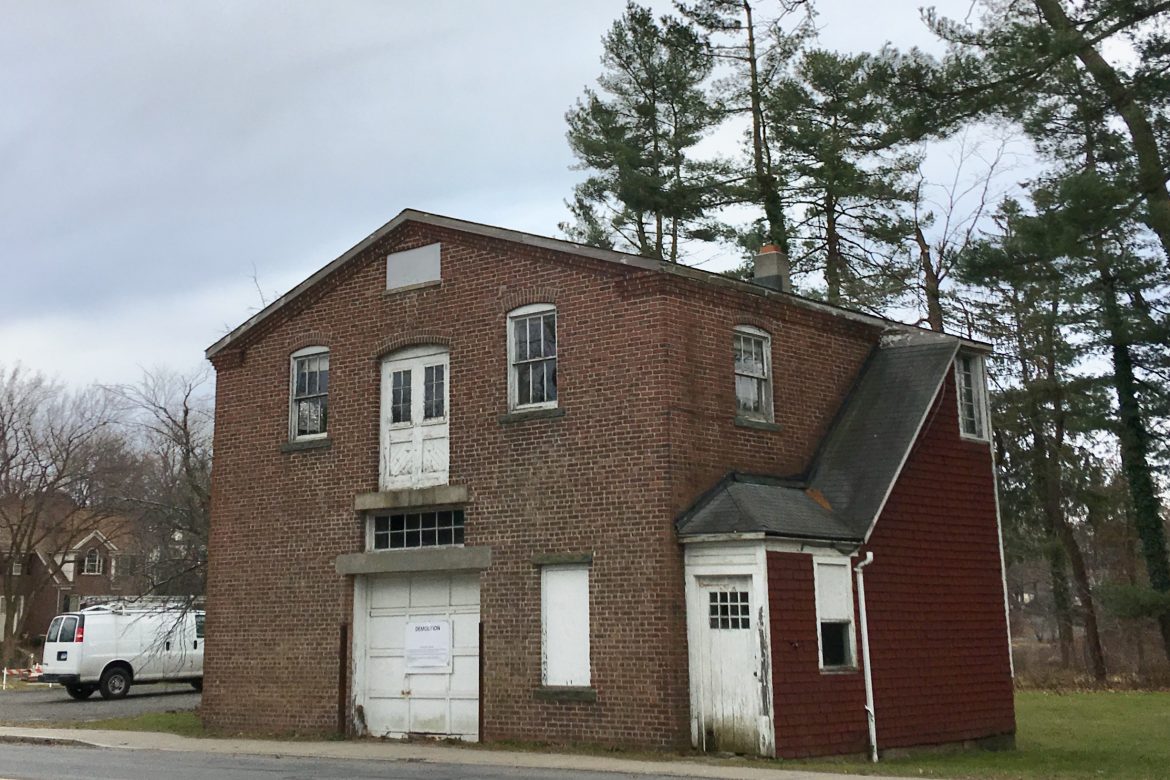 The municipal body that by Town Charter would need to approve contracts related to the demolition of a widely discussed building at the northern edge of Mead Park remains divided about whether or not to support a nonprofit organization’s efforts to restore it.

During their regular meeting last week, members of the Board of Selectmen heard from two members of the New Canaan Preservation Alliance. The organization is requesting that the ‘Notice of Demolition’ sign be removed from the  ‘Mead Park Brick Barn,’ to be allowed to spruce up the abandoned Richmond Hill Road (with some outdoor cleanup and a wreath) and to get feedback on a proposed lease agreement.

Yet at the close of the Dec. 4 meeting, when Selectman Kit Devereaux asked for information on where the town stands with respect to the NCPA, First Selectman Kevin Moynihan said that the organization cannot make a request of the selectmen through a meeting’s public comment period.

“I don’t think it has any bearing on demo or not demoing,” Williams said at the meeting, held in Town Hall. “I think there is no legal requirement to have the demo sign there, and if we could pretty it up with a nice big wreath, I would not be averse.”

Though Moynihan has vowed to have the Brick Barn razed, the selectmen in October decided to forgo voting on a pair of demolition contracts after it was clear that both Devereaux and Williams wanted to allow the NCPA to demonstrate that they had the wherewithal to restore it.

Those contracts have not come before the Board since, though during last week’s meeting NCPA Vice President Rose Scott Long Rothbart and Board of Directors member Charlie Robinson addressed the selectmen.

Robinson said the use of the demolition sign posted on the building “seems to have passed” and asked that one piece of plywood be removed from the Barn’s lower window and that a wreath be hung from it.

“We need to clean up some of the overgrowth and plantings around the outside of the barn,” Robinson said. “Give it a start, give the town a taste of what it could be.”

Scott Long Rothbart asked that the organization be allowed to hang a sign showing its contact information instead. She said the NCPA has responded to all requests for documentation, and called for the formation of a standing Town Council committee “so that actual discussions can take place.”

“These minimal requests allow us to demonstrate our continued commitment to this project and to improve the appearance of the building,” Scott Long Rothbart said.

Moynihan did not look at either NCPA member as they addressed the Board from the dais.

During a discussion at the end of the meeting, he noted that the Parks & Recreation Commission “confirmed its desire to take that building down” during Nov. 14 meeting.

Williams responded, “Again? Are we going to go back a third time?”

Moynihan also noted that the Planning & Zoning Commission in October voted in favor of New Canaan “abandoning” the building, a requirement under state law prior to a municipality divesting itself of a town-owned structure.

The Barn, also known as the “Richmond Hill Garage,” is where Standard Oil’s horse-drawn delivery wagons used to fill containers for fuel delivery in New Canaan.

Under the Town Charter, the Board of Selectmen is “the purchasing agent” for the town, and is responsible for the purchase of “all goods and the contracting of all services required by the Town Council or any elected or appointed board, commission, committee, officer and department of the Town.”