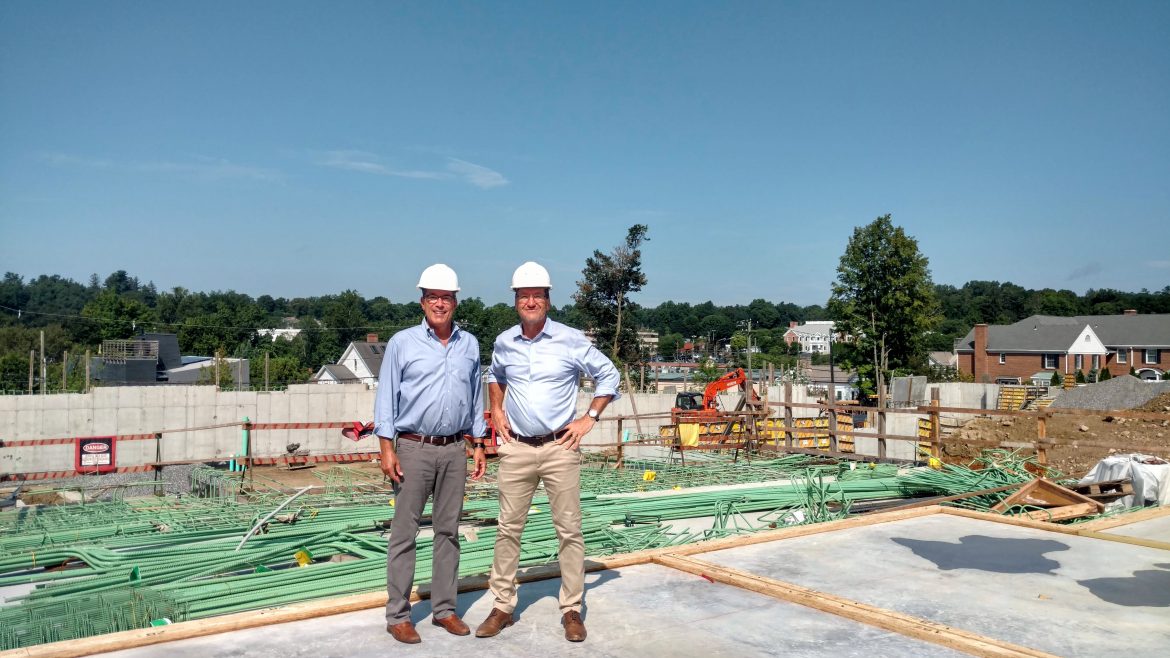 (L to R) Arnold Karp and Paul Stone standing on the concrete floor pad of one of the apartment buildings at the Merritt Village redevelopment. Credit: Olivia Oldham

Construction is progressing apace at the ‘Merritt Village’ redevelopment, and the frame of the first building in the apartment-and-condo complex will start to go up this week, according to the project’s owner.

The widely anticipated 99-unit project on time and on budget, Arnold Karp of property owner M2 Partners LLC said Monday during a walkthrough of the site at Park and Mead Streets.

“As developers that’s always the part that you worry about,” Karp said. “With the weather we’ve had different issues but we’ve luckily figured all that into our timing.”

When the complex is completed in 2021 it will consist of four buildings, Karp said. Two of these buildings will together contain 59 rental apartments, and the other two will include 40 condominiums for sale. The apartments will range in size from one to three bedrooms, Karp said, while most all of the condos will have two or three bedrooms.

In addition to the much-discussed retaining walls fronting Park Street, most of the work completed so far has been on an approximately 190-space underground garage, which will run beneath and connect all four of the complex’s buildings. The garage will be what is known as ‘tempered’, Karp said, meaning that it will be heated in winter to around 60 degrees. 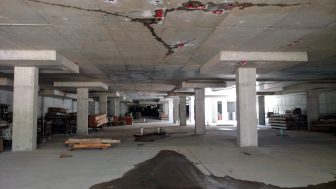 Having an underground garage will allow the complex to maintain around 50% of its surface area as open or green space, as opposed to the 10 to 12% that was achieved by the property’s previous use as a parking garage, Karp said. This open space will include a walkway, open to the public, across the complex from Maple Street to Mead Street, he said.

The condominiums are to range in size from about 1,600 to nearly 3,000 square feet, according to Karp Associates Chief Operations Officer Paul Stone.

Because the work on the project—which received final P&Z approval in November 2016—has so far been mainly underground, it has been largely invisible to passersby.

All that will change this week.

The concrete platforms for the two apartment buildings toward the back of the property have now been poured, and work began Monday to raise the frames for one of them. 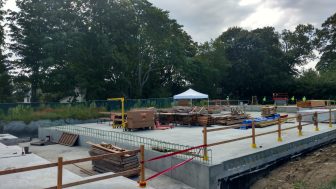 The concrete floor pad of ‘Building B’: the apartment building that will start going up this week. Credit: Olivia Oldham

Karp said that about 160 prospective owners and tenants have expressed interest in the project. He said that renters likely will be a combination of people moving down to the city but who want to maintain a residence in New Canaan, and newcomers who haven’t yet found a house to buy.

The last building his company constructed on Cross Street, Karp said, contains 12 rental apartments. In the first year after its construction, six tenants from the building purchased houses locally—five in New Canaan and one in Darien.

“Our concept works,” he said. “If people come to the community and see how nice it is—they like the library, they get used to the train station, they like the  downtown—then they will stay. But if we don’t offer what I call ‘intro-housing’ then they will end up in another community and we never get them back. You have to offer the kind of housing that people want, otherwise they go elsewhere.”

He added that New Canaan has much to offer to potential residents, emphasizing its strong sense of community and high-quality amenities. When you move to New Canaan, “you become part of the fabric of town,” Karp said.

Despite the interest the complex has already had, though, Karp said that there was nothing yet to show people.

“In New Canaan there’s never been a complex like this,” he said. “So when you explain to people that there will be a concierge in the condo building and that you’ll walk into a lobby to get to your apartment, people don’t really get it because they’re not used to that. So we want to get a building up and closed in before people see them.” 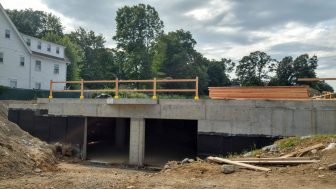 “We’re insulating the right way, we’re energy conscious. That seems to be what our buyers and renters are going to want,” he said.

Stone said, “Our HVAC system is super high efficiency. While we’re not pursuing LEED designation per se because of all the hurdles you have to go over, we would get a lot of points towards it just due to walkability—that’s a huge thing—because it’s so close to downtown and to mass transit.”

Other environmentally friendly aspects of the development are the large amount of greenspace it will include, and other features of the buildings such as the windows, Stone said.

Karp said, “We’ve done everything like we’re building for the next 50 to 100 years, which doesn’t make it inexpensive to build, but it makes it the right way to build.”

Karp estimated that the rental buildings will be completed ready for people to move in in the first quarter of 2021, with the condos being finalized later that year. Interested parties will be able to take tours before then, Karp said, and he plans to set up a sales center for demonstration purposes.

On the topic of the retaining wall on Park Street, which was the subject of significant controversy earlier in the year, Karp said, “You only hear the bad things. A lot of people stop in and say it looks great.”

He added, “When we went to get our approvals everybody said, ‘Oh it’s going to disrupt town.’ We’re now way past what everybody was concerned about and I’d say we’ve managed that extremely well.”

[Comments have been disabled on this article.]