New Canaan’s highest elected official said Tuesday night that the town “is living in a bubble” with respect to its low COVID-19 virus infection rate.

First Selectman Kevin Moynihan during an update to the Board of Finance said the town is seeing “one college-age person a week that is getting tested away at college and they get reported back to their hometown as their permanent address.”

“There are some hotspots in various other places around the state,” he said during the meeting, held via videoconference. “But our numbers are scarily low here. Which is good. We are worried about whether some of these college kids might be coming home instead of saying on campus. But our Health Department makes contact with everyone and verifies where they are.”

According to the Connecticut Department of Public Health, New Canaan has 213 confirmed and probable cases of COVID-19, and 35 deaths. Here’s a table breaking down infection rates in New Canaan and other Fairfield County towns: 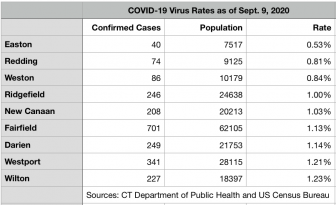 New Canaan Health Director Jenn Eielson reported during the Sept. 3 meeting of the Health and Human Services Commission that the town has had a total of 4,802 people tested at Stamford Hospital with just 11 positive cases.

“Those are pretty incredible low rates, which is great news,” Eielson said. “Hopefully it stays that way.”

Commissioner Tom Ferguson asked about guidelines for seeing grandchildren now that kids are back in school.

Eielson said, “If I were you, I would have them tested first,” adding that doing so “obviously for grandkids and grandparents is not easy to do.”

“And communities that have low transmission like ours, when they are sniffling or showing what are considered now COVID symptoms, most likely it’s not going to be COVID,” she continued. “It will be flu or allergies or [something] to that effect. But obviously without testing you don’t know, because 40% of positive tests now are asymptomatic.”