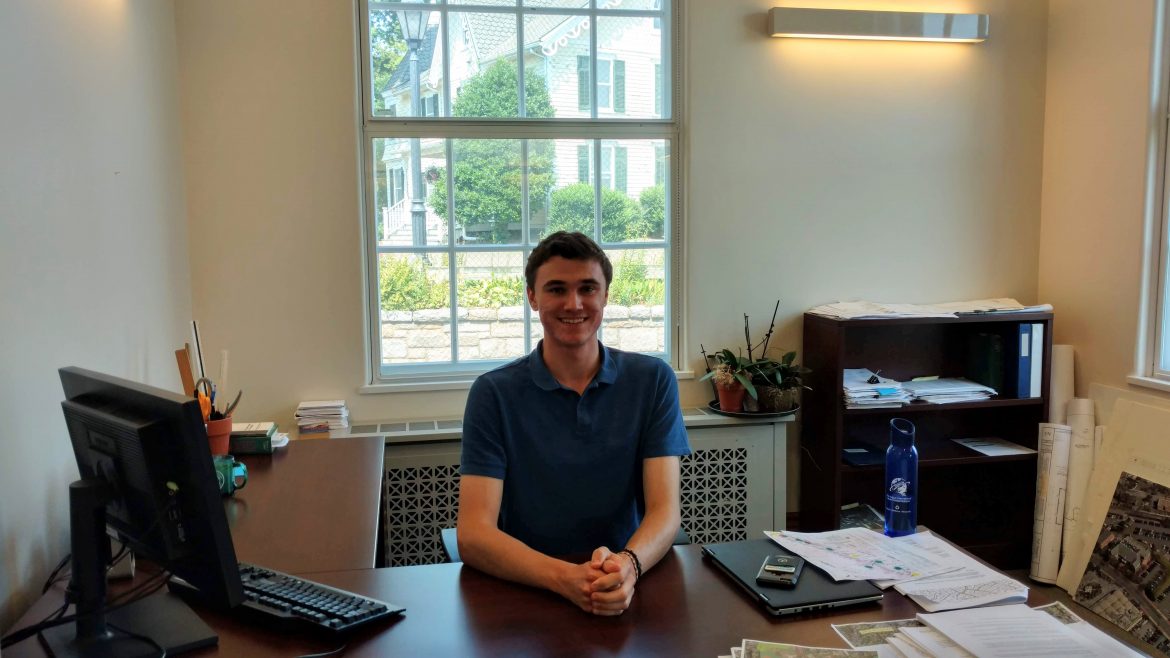 Before starting his New Canaan High School Senior Internship in the Department of Public Works, Kevin O’Brien Brunner said he never thought about how the town ran.

“Being able to actually work here, I not only get to see what’s behind the curtain—how it actually runs—but I also get to meet the real people with real lives who are making it run,” he said.

The NCHS Senior Internship Program has grown in its nine years that nearly all seniors participate in it. What’s more rare is for those college-bound teens to work the summer after graduating NCHS at their internship sites.

Brunner and NCHS class of 2019 graduate Betsy Marsh, who has interned in the Office of the First Selectman and the Finance Department, both said they’ve learned much they didn’t know before about their hometown’s inner workings.

Marsh said she found it “very interesting being on the inside of things… I never knew anything that was going in town before I started interning here.”

The interns’ supervisors were also enthusiastic.

“Betsy has been a big help,” First Selectman Kevin Moynihan said. She’s worked on a survey for the town’s economic study, and the re-launch of the town’s website, he said.

“We launched the website on June 17 but we still needed to train people on social media,” Moynihan said. He said that in the context of that task, Marsh was able to bridge the gap between older staff members and younger residents who communicate through social media.

“I’m a big believer in internships,” Moynihan said. “It’s great for the organization because it gives a young perspective and keeps people on their toes.”

Public Works Director Tiger Mann said Marsh had also lent him a hand with social media, spending time with him to improve the department’s Instagram page.

Mann said that his only complaint about the NCHS Summer Internship programme has been its short duration.

“Five weeks doesn’t give you a broad enough view and it doesn’t give you enough time… in Public Works and engineering,” he said. In contrast, by having Brunner stay on for four months, Mann said Brunner has able to see projects through from initiation to completion.

Asked what they had most enjoyed about their internships, Marsh and Brunner—both members of the NCHS Model United Nations—said that they appreciated the real-world experience they had gained.

“This has been a really good experience because I’ve had to be responsible,” said Marsh, who will depart Thursday for Indiana University where she plans to study entrepreneurship and corporate innovation.

“I’ve had to hold myself accountable,” she added.

During her years at NCHS, Marsh was a co-leader of the Get Outdoors Club, the Track and Cross-Country team, and volunteered at the Carver Center in Norwalk.

“I went into the senior internship program… wanting to get an experience of a real workplace,” Brunner said.

Brunner plans to study industrial engineering at Northwestern University. Gaining firsthand experience and seeing how real professionals work has been “hugely helpful in determining that, yes, engineering is the way I want to go,” he said.

Brunner said that during the course of his internship, he has been involved in projects including paving, installing new sidewalks, and traffic islands.

“I’m actually doing real stuff that is actually going to affect the town,” he said.

Having Brunner around has “taken a little bit of load off me,” Mann said. “Information I have to seek, phone calls I have to make, data that has to be driven or calculated or determined—he can go and do it.”

Asked whether he would extend his interns for the summer again, Mann said he would do so “in a heartbeat.”