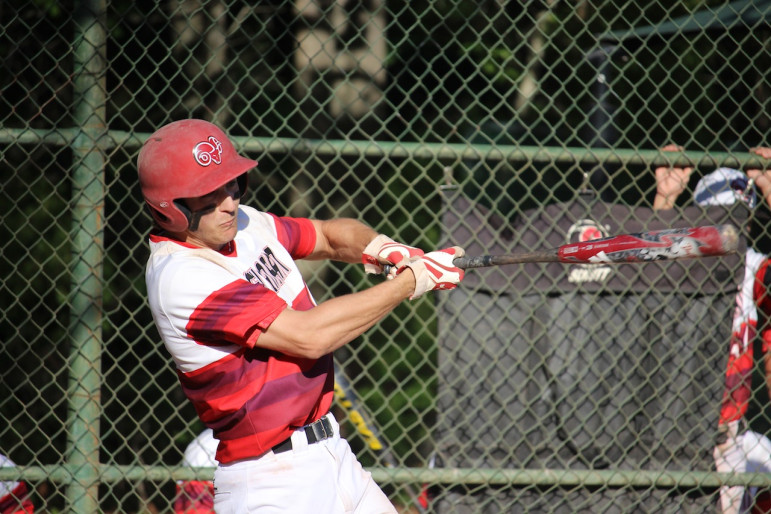 Zach Smith with a cut as New Canaan beat Trinity Catholic 9-8 at Mead Park on May 14, 2015. Credit: Terry Dinan 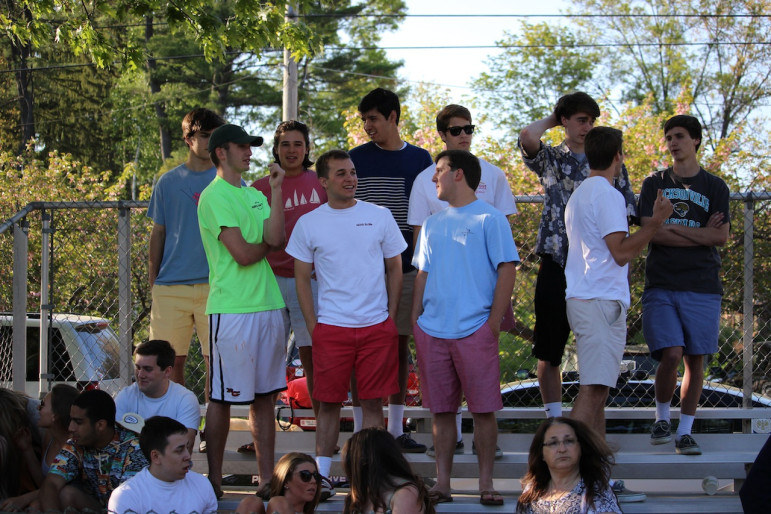 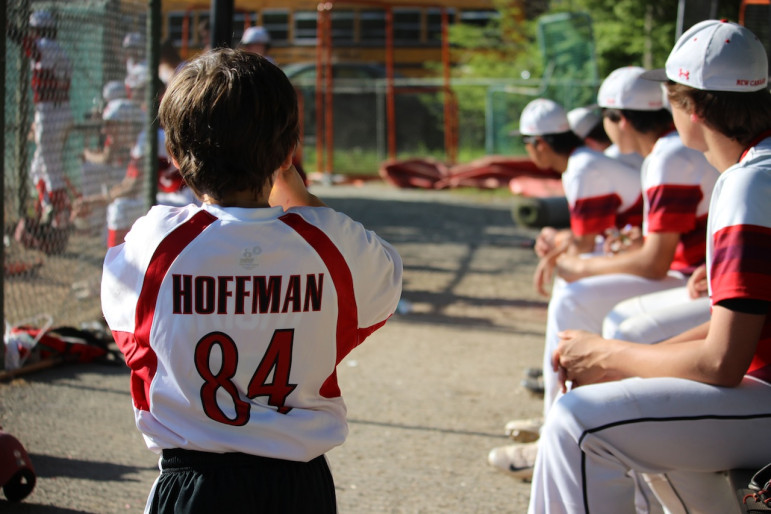 On Monday it was Robbie Jones who came through with a two-run home run to help the Rams complete the come-from-behind win against Greenwich in extra innings.

On Thursday, it was Brandon Abate’s turn to be the hero as with the game tied and the bases loaded, he connected on a single to right field to score Robbie Jones from third and cap off an incredible week for New Canaan Baseball.

“I’m just trying to think of it as any other at-bat,” the senior co-captain told NewCanaanite.com. “You just gotta relax your nerves. You get a little bit jumpy out there—your heart starts pumping , and if you get anxious you’re gonna ground out or something. I was just thinking about hitting the ball up the middle.”

Instead, the ball went into right field for the game-winner. And for the second home game in a row there was a feeling of euphoria for Abate and his teammates.

“It’s just a sea of happiness,” Abate said. “I picked my team up,—we got another victory out of it. That’s what counts.”

SImilar to Monday’s thriller, this game didn’t get off to a great start for New Canaan. Trinity Catholic had the bases loaded with the benefit of only one hit in the top of the first before an out was even recorded. After a fielder’s choice ground out drove one run home, starting pitcher Anthony Hoegemann helped himself by grounding a single through the hole into right for an early 2-0 lead.

In the top of the second, the Crusaders extended the lead to 5-0 on a three-run homer from third baseman Matt Fraioli.

The Rams would start to chip away at the Trinity lead in the bottom half of the second. Abate opened the inning by lining a fastball to right for a single, which was followed by a defensive error made by Trinity on a sharply hit grounder from third baseman Kyle Levasseur giving New Canaan runners on second an third.

Thomas Williams then hit a come-backer to Hoegemann, who reached first safely after Hoegemann was unable to pick Abate off third. With the bases loaded and nobody out, Matt Burger worked a walk for an RBI to make it 5-1 Trinity. Then after consecutive strikeouts, Hoegemann recorded another walk, this time to Jones, trimming the Crusaders’ lead to 5-2, which held until the bottom of the third.

Co-captain Zach Smith got that inning started by lacing a double to centerfield and was immediately singled home by Abate to make it 5-3. Abate advanced to second on the throw home.

After taking third on a dropped third strike, Abate scored after a double by Williams to make it 5-4 Catholic. Trinity coach Tracy Nichols relieved Hoegemann with right-hander John Hazzard, who stopped the bleeding for that inning.

Clark Newlove—who relieved Havard to begin the top of the fourth—worked his way out of a jam that had runners on second and third with only one out, giving New Canaan some momentum heading into the bottom half.

Jones and Levasseur got the inning going with back-to-back singles, followed by a walk to Zach Smith. Abate hit a sacrifice fly to deep left field that plated Jones to tie the game at five and allowed Levasseur and Smith to move up a base.

After a pickoff attempt at third sailed into left field, both Levasseur and Smith scored giving the Rams a 7-5 lead.

New Canaan would hold that lead until the top of the seventh as Newlove allowed only one Crusader hit while striking out three in innings four through six.

Trinity began their half of the seventh with a single to center from Dillon Daine. A Rams error and a fielder’s choice put Crusaders runners on second and third with one out.

Newlove then struck out Trinity’s Nick Lupinacci on three pitches, but the Crusaders got the equalizer they needed from pinch-hitter Will Hermann, who ripped a pitch down the right field line, tying the game at seven.

After an intentional walk to shortstop Randy Polonia, Hazzard came in to pinch-run for Hermann at second, when Fraioli struck again. The Springfield College-bound senior singled up the middle, sending Hazzard home to give the Crusaders an 8-7 lead.

And while the Rams may have been down momentarily, they were not out.

With one out in the bottom of the seventh, Thomas Reynolds hit a single to right. David Giusti followed with a double to left center. With first base open, Nichols elected to intentionally walk Robby Jones, loading the bases for New Canaan with one out.

Levasseur then stepped up to the plate and put the ball in the play, but grounded it right to Polonia who—with the infield playing in—gunned out Reynolds at home, stymying the potential tying run.

With the Rams now down to their last out, Zach Smith chopped a grounder to Polonia as well. Smith hustled down the line to beat the throw, allowing David Giusti to score and tie the game at eight.

That put the game in the capable hands of Abate, who already with two hits and two RBI on the afternoon, added a third to each when he lined Greig’s third pitch of the at-bat to right field for the game-winning single, scoring Jones and giving New Canaan (14-3, 13-2 FCIAC) the 9-8 victory over Trinity Catholic (11-6, 10-5 FCIAC).

“We did what we had to do—we fought,” New Canaan head coach Mitch Hoffman told NewCanaanite.com. “I’m trying to preach to them that it’s not going to continue like that, but they are fighting. Today was a good win because we’re tired (after playing three games in four days). We need a break. And it’s good we will get three days off, technically, and it’ll be a nice little break for us.”

The Rams will take that break to prepare to be back in action at Mead on Monday, May 18 at 4 p.m. when they take on arch-rival Darien, who currently tops the conference with a perfect 14-0 record in the FCIAC.

Now a veteran of the rivalry in his sixth season as head coach, Hoffman knows what to expect come Monday.

“There’s a lot of hype for the Darien game, and deservedly so,” Hoffman said. “It’s Darien—New Canaan. It’s going to be a lot of fun.”