“They have given of themselves to make the community better”—that’s how New Canaan Community Foundation President and CEO Lauren Patterson describes five to be honored next month at the organization’s “Spirit of New Canaan” luncheon. 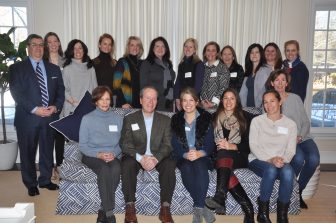 Selected through a careful process that’s overseen by NCCF, this year’s honorees include: Tom McLane, who helped found the Community Foundation itself in 1977; Meg Domino, who has touched the lives of countless families here in 16 years as executive director of New Canaan CARES; New Canaan Land Trust board of directors member Schipper, widely credited with reinvigorating that important organization; and Kathie and Leo Karl Jr., heads of a civic-minded, longtime local family whose continuing legacy of community service is reflected in every aspect of the town.

“The Spirit of New Canaan Awards are meant to honor remarkable people or couples who have an impact on the community, and typically that is through civic engagement, community leadership—volunteers or supporters of different efforts in the town who have made an impact,” Patterson said.

The luncheon is to be held 11:30 a.m. to 2 p.m. on Tuesday, April 24 at Woodway Country Club. Those seeking to reserve a seat ($100) may do so through the Community Foundation’s website. Proceeds from the event go to NCCF’s Spirit of New Canaan Fund, which supports projects of special significance to the community (through grant-making).

For Riley, the Spirit of New Canaan Awards are a chance to pause as a community and come together to “shine a spotlight on people who do really good things in our community that may otherwise go unnoticed.”

“Instead, we value so much in our community that we stop what we’re doing and actually create a tribute to the people who have gone above and beyond consistently over a long period of time,” Riley said.

“It’s really an award that recognizes not just devotion to community but also a longstanding commitment which I think is really special.”

Each of the honorees will have a chance to address those who attend the luncheon, she said.

Past “Spirit of New Canaan” honorees include Jim Bach