Karen Zuckert describes the eat-in bakery that she and husband Andrew soft-opened Saturday on Elm Street as “an extension of our home.” 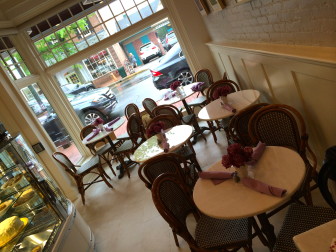 Gingerbitz includes 15 seats inside and will have eight more out front as weather allows. Credit: Michael Dinan

Asked what it feels like to open a physical storefront after “hiding in the kitchen” (her words) for 21 years, earning a loyal following for her artistic baked goods, Karen said, “It’s like a homecoming.”

“I’m happy to see all my customers come here and see them so excited when they walk through the door. It’s meaningful,” Karen said Thursday afternoon as Gingerbitz filled up quickly with passersby catching sight of the newly opened shop through its street-facing, floor-to-ceiling windows. Nestled in the former Caroline’s Créperie space, the elegant Gingerbitz occupies what had been the only vacant (or at least non-operating) street-level commercial storefront on Elm between Main and Park. 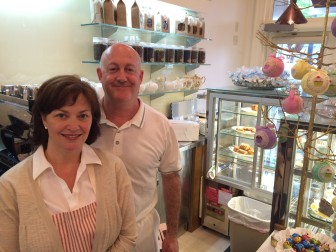 Open 8:30 a.m. to 5 p.m. Tuesday through Saturday, Gingerbitz includes 15 seats (there’ll be eight more out front if and when Spring arrives), features fresh “moody blues” (garden roses) on the tables, area artists’ work (for sale) on the walls, found materials-made light fixtures and clock, and its edible offerings are anchored by Karen’s baked goods.

The Zuckerts have lived in New Canaan for about 14 years—they have three children, including one at St. Luke’s School—and Karen leads two high school Girl Scouts troops, belongs to the New Canaan Chapter of the National Charity League and has volunteered with Staying Put in New Canaan and belonged to the New Canaan Sewing Group. 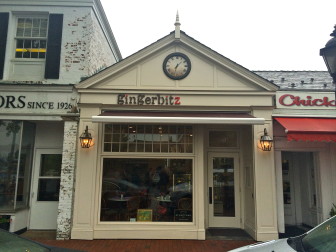 The building at 155 Elm St. was built by Conrad Stein, and his initials can still be seen on the hands of the antique clock above the door out front. Credit: Michael Dinan

Andrew retired from his 30-year advertising career about 18 months ago (“It’s great to not commute to New York City anymore, to be able to drive four miles to work and have this great view”) and he said that part of what prompted the launch of Gingerbitz as a physical shop was the lack of a bakery in New Canaan—Ritz had been on the other side of the alley, but closed many years ago (Chef Luis since has expanded into that space).

“The town needed a bakery and we happen to have a product that fit the bill,” he said. “We love the town, we want to give back to the town, we wanted to create a unique space where people could come in and relax and enjoy themselves.”

Longtime townies may look at Gingerbitz as an attempt to synthesize what in the past have been disparate businesses in New Canaan. We’ve noted the former Ritz Pastry Shop (once Swiss Chalet) and Caroline’s Créperie on Elm. There also was the Irish Tea Room over at the old Knights of Columbus building on Main Street (now home to Boulevard 18), Cornucopia on Elm Street and, more recently, Betty’s Teas on Main opposite the library.

So far, so good: Local businesspeople who rank among Gingerbitz’s early customers (an official grand opening is planned for a couple of weeks from now) say they’re coming back.

Jim O’Neill of nearby New Canaan Music is a 30-year coffee drinker and, based on a single cup of the “Hair Bender” coffee at Gingerbitz, he’s likely to change a serious habit: “I’ll probably go there instead of Starbucks now,” he told NewCanaanite.com. 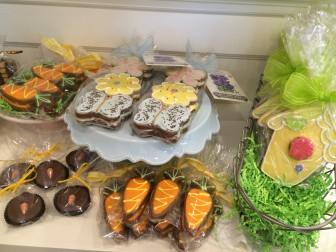 Here’s what New Canaan Chamber of Commerce Executive Director Tucker Murphy said: “While we have numerous places to get baked goodies, we were told over and over again in the Market Demand Study that we needed a full-blown bakery and now we do. And again, a local couple, so we are thrilled to have them here.”

The Zuckerts—Karen originally from Nyack, NY, Andrew from Old Greenwich—met in Chicago, where he was working and she was studying fine arts at the Art Institute of Chicago (bookbinding, print-making, painting).

The name ‘Gingerbitz’ is drawn—in part (Karen is known for her gingerbread cookies)—from Andrew’s father. Karen fondly recalls Donald Zuckert: “He gave me a nickname, ‘Bits,’ and when Andy and I were married he changed the S to Z for ‘Zuckert,’ and so when I needed a name, it was ‘Gingerbitz.’ It’s a term of endearment.” 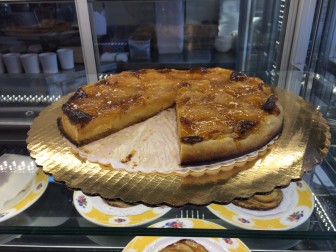 Here’s a pear tart with an almond cream. Gingerbitz features plenty of pastries, all made daily right in the Elm Street shop, including apple tartlets and breakfast pastries, Polish coffee cake, cupcakes and other cakes. Credit: Michael Dinan

Her father-in-law passed away in October.

“He for years had been pushing me to move this out of my home and open up a place,” Karen recalled.

In some ways, she’d been operating “out of home” since childhood.

“I had a Suzy Homemaker Oven,” Karen recalled with a laugh. “We would always make cupcakes in there. It had two light bulbs.”

Artistic baking allowed Karen to combine a penchant for fine art with her longstanding interest in baking.

Andrew described this momentous period where he and his wife have put themselves out there as local owners-on-site opening up their business as one of “pride.”

And he’s proud of Karen, quickly attributing to his wife the warm décor (the Zuckerts used, and swear by, Norwalk-based George Farrington for finish carpentry) and everything in it.

“Karen is a remarkable artist because she does so many different things so well—it’s not limited to baking or to bookbinding or to painting or calligraphy,” he said. “It’s all of that. It’s everything. It’s incredible floral design, everything that requires an artistic eye. Anything visual, she just specializes in it. It’s wonderful.”

Gingerbitz is at 155 Elm St., just down from Brotherhood & Higley: