Fred Baker, one of New Canaan’s most visible and experienced public safety professionals, is set to retire at the end of this week. 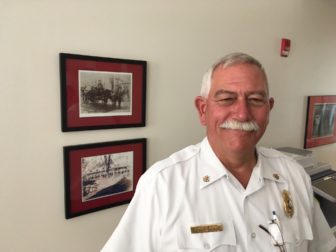 After more than a dozen years as New Canaan’s fire marshal and nearly a half-century in the field, the new grandfather will step down from a position with which he’s become synonymous here.

“I’m feeling great,” the mustachioed Redding resident told NewCanaanite.com when asked for his thoughts on retirement. “I’m looking forward to it. I’ve been in the fire service, as they call it, for 47-plus years, and I’m looking forward to doing my projects at home—puttering at home. I’m not going anywhere. I don’t have a Florida or Maine home to move to. My family is all here.” 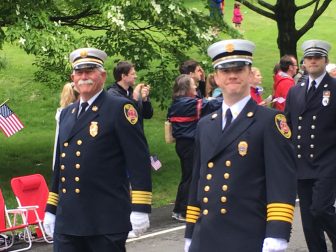 A member of the New Canaan Rotary Club who has educated scores of homeowners on fire safety since starting as fire marshal here in 2006, Baker has routinely gone beyond the nuts and bolts of the job—inspecting buildings and reviewing permit applications for code compliance—helping to promote fire detector giveaways, offering to counsel homeowners on their systems and advocating for dry hydrant installations throughout the town as well as natural gas lines (rather than propane tanks) for businesses downtown.

“Fred truly is the personification of a dedicated, client-friendly public safety officer,” Fire Commission Chair Jack Horner said. “His outreach programs regarding fire safety—especially around the holidays, vacation time and back to college—are invaluable. And as one of the commissioners who was responsible for hiring Fred, I had the good fortune to watch his entire career in New Canaan, and he is appreciated by the entire community—the homeowners, the store owners and anyone he came into contact with. We will miss his smiling friendly face, for sure.”

The Fire Commission presented Baker with a recognition plaque at its regular meeting Tuesday. 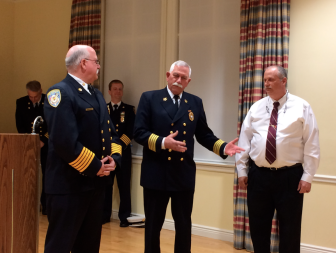 Deputy Fire Marshall Bill Dingee (right) was honored for 21 years of service in his position, during a Jan. 13, 2015 ceremony at Lapham Community Center. Here he is with Fire Chief Jack Hennessey (left) and Fire Marshal Fred Baker. “We want to thank him for his service,” Baker said. Dingee’s plaque reads, in part: “Presented to William R. Dingee in recognition and appreciation for your 21 years of dedicated service as deputy fire marshal in the town of New Canaan.” Credit: Michael Dinan

Fire Chief Jack Hennessy said Baker “built many positive relationships within town and the region with his real-world experience and did much to improve local life and property safety.”

“He has been a skillful goodwill ambassador for public safety,” Hennessy said in an email. “Before he came to New Canaan, Fred served in the Wilton and Westport Fire Departments and has had a long and distinguished career. His legacy of improving code compliance, improving our municipal and rural water supply systems and pushing for a natural gas distribution system will benefit the Town for future decades. We all wish him a long and happy retirement.”

Beth Jones, a former selectman who came onto the Fire Commission last year, said Baker’s shoes “will be hard to fill.”

“We have been truly lucky to have him on our team,” Jones said. “I am so grateful for the many outstanding employees the town of New Canaan has and Fred is right up there at the top of the list. He is kind, dedicated, and a consummate professional.” 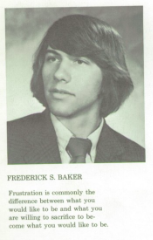 A resident of Massachusetts and Iowa before moving to Wilton at age 12, Baker started with the Wilton Volunteer Fire Department in 1973 (“My first big experience with the fire service was the great ice storm of ’73,” he said), and graduated from Wilton High School the following year. He was hired as a firefighter in Wilton and spent four years there before taking a job with the Westport Fire Department, where he worked for about 28 years before coming to New Canaan.

Asked what drew him into a profession that sustained him for an entire career, Baker said, “I kind of stumbled on the fire service. It was not something like I had a father in the fire service or a grandfather. It just kind of happened with a friend of a friend who was a member of the volunteers, and so I joined and it struck my fancy, my aptitude of being a hands-on kind of guy, and just went on from there.” 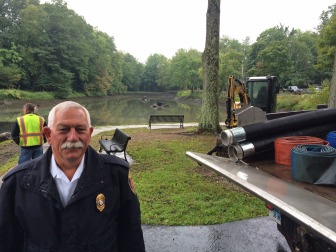 Fire Marshal Fred Baker stands near a truck full of equipment for a ‘Dry Hydrant’ installed in Mill Pond during a dredge. September 19, 2014. Credit: Michael Dinan

Asked whether he intends to remain involved in Rotary or get involved with the service organization closer to home, Baker said, “I am going to play it by ear. There is no Rotary up in Redding. We’ll see how much I drive my wife crazy and looking for excuses to get out of the house on Thursdays. I’m going to miss the folks, but it’s a half-hour drive to come down and get here.”

The New Canaan community “has been terrific to work with, and responsive,” he said.

“I don’t know what else to say,” he said. “It’s been great being here, everybody has been helpful. Just stay fire-safe.”