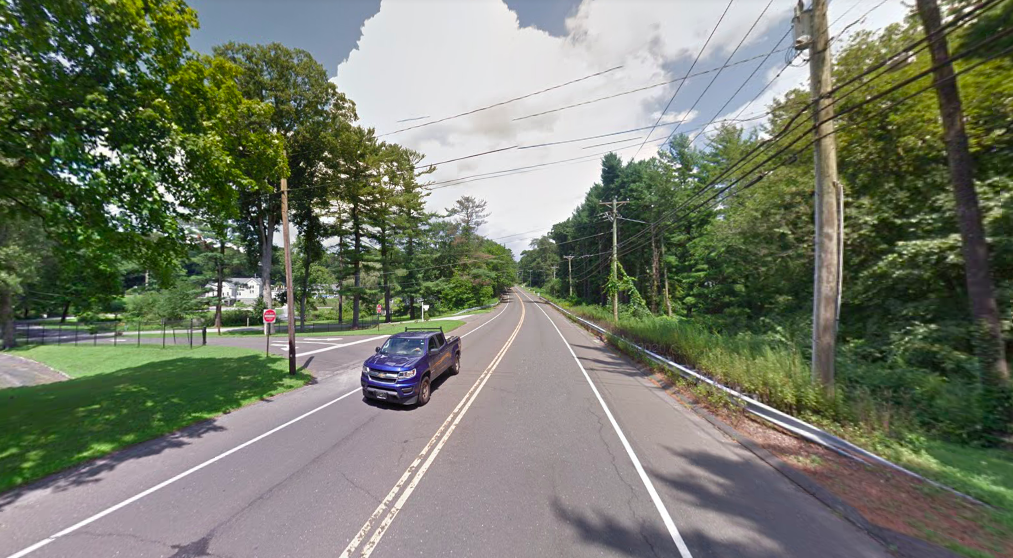 Here's the location of the culvert that is to be replaced. Streetview

A plan to close Route 123 in New Canaan in both directions starting this week for a construction project has been put off until spring, officials say.

Local officials last month urged the Connecticut Department of Transportation to put off its plan to replace a box culvert near the New Canaan Field Club.

The work was to start this week and would’ve seen motor vehicle traffic detoured around the heavily used state road for 21 days.

During a meeting Tuesday morning, Public Works Director Tiger Mann said, “It is not official yet, but I heard from the contractor this morning, that that will be postponed at least until the spring.”

“The DOT has cancelled all progress meetings between now and then,” Mann said during a regular meeting of the Selectmen’s Advisory Committee on Buildings and Infrastructure, held via videoconference. “The contractor had written a letter asking for it to be delayed. The Police Commission voted in favor of having it delayed and wrote a letter in favor of having it delayed. While we haven’t heard officially, all things point to the fact that it won’t happen until the spring. The Police Commission asked for a June start, and we’ll talk to the DOT about that.”

DOT officials could not immediately confirm the project’s timetable.

At its regular meeting in September, members of the Police Commission voted 3-0 to request that the state postpone the project to next year, saying they were concerned about starting the work so close to a major holiday as well as the date that asphalt plants shut down for winter. Mann said during that Commission meeting that the contractor on the job has itself asked for a delay because the materials for the culvert wouldn’t be available until Nov. 2, meaning any bad weather would delay the project into December.

The project is expected to cost the state nearly $1 million, DOT officials have said. The box culvert to be replaced spans the Rose Brook just north of the intersection of Smith Ridge Road and Glen Drive, in the area of 183 Smith Ridge.

The project originally had been scheduled for this past summer but was delayed due to the COVID-19 public health emergency, among other reasons, officials have said.

If and when the project gets green-lighted again, motorists will be detoured with signs at multiple locations along Route 123, according to plans, including at Canoe Hill Road north of the project, and Parade Hill Road and Brushy Ridge Road to the south.

One thought on “Town: DOT Postpones Project That Will Close Route 123 for Three Weeks”