A 46-year-old New Canaan man faces misdemeanor charges after flooring his sports car and bolting away from police Thursday night during a motor vehicle stop on Wahackme Road.

At about 9 p.m., police stopped the offending motorist near Bayberry Road after he crossed over the double-yellow line to pass an officer who was driving an unmarked police SUV, according to a police report. 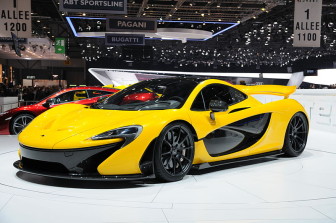 A McLaren, photo from the Geneva Motor Show 2013, by Norbert Aepli, Switzerland/Wikimedia Commons

Lights still flashing on that SUV (a Chevy Tahoe), police took down the license plate on the man’s car and before approaching the stopped sports car—a yellow 2013 McLaren—took off eastbound on Wahackme quickly enough to fishtail, the report said.

Police identified the car’s owner as a Ponus Ridge man and, when they got to his home, confronted the driver. According to a police report, the man admitted that it was stupid to leave the scene and added that “he did not understand why police were at his house, because he didn’t kill anyone or damage any property.”

Police charged him with reckless driving, improper passing and disobeying the signal of an officer.

He was released on $1,500 bond and scheduled to appear Sept. 8 in state Superior Court in Norwalk.