Long may, on Ponus Path, this sentry standing,

The sun, the stars, the hunter’s moon, salute;

A silent figure, rugged and commanding,

Bearing its message when our tongues are mute.

Yet though we raise the stone and guard it duly,

Stern time, some day shall bid the finger fall,

The only monument that serves us truly

Is the heart’s honest word, to each and all.

—From “A Hymn to Ponus,” written by Charles H. Crandall of New Canaan for the Oct. 2, 1897 dedication of the “Monolith on Ponus Path” 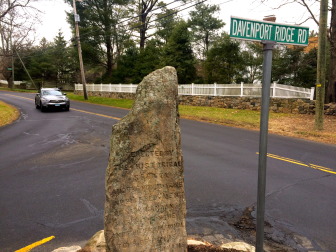 A New Canaan man has lodged a complaint with town officials that his sightline as a motorist at Ponus Ridge and Davenport Ridge Road is obscured by a large upright stone on the traffic island there—a 117-year-old monument to a 17th Century native American chief said to be buried nearby.

Officials with a working group that oversees traffic calming in New Canaan said Tuesday that a similar request to move the rock had been made about four years ago. According to Tiger Mann, assistant director of the Department of Public Works, this most recent motorist said he “doesn’t like the island with the sachem’s rock on it.”

“He says it blocks the sightline,” Mann said at the meeting of the Traffic Calming Work Group, held in the Training Room at the New Canaan Police Department. 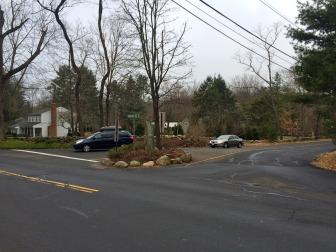 A look from the opposite side of Ponus Ridge at the traffic island. Credit: Michael Dinan

Officials searched for an accident history at the intersection—by the corner of the Hayes family’s well-preserved antique home and a few doors down from Ponus Ridge Chapel—but found nothing significant just there, Mann said.

Police Capt. John DiFederico, a member of the working group, said the department is aware that Ponus Ridge is a target area for selective traffic enforcement—motorists often follow other cars too closely and run the stop signs at Frogtown and Jelliff Mill Roads, police have said—and that officers are “out there frequently.”

At this point, especially with no history of accidents at the intersection, Mann said that he is not likely to recommend moving the rock.

It’s been there a long time.

The granite monolith was unveiled at 3:30 p.m. on Oct. 2, 1897 (a Saturday) by the New Canaan Historical Society and Ponus Tribe of Red Men No. 31, according to an article in the New Canaan Messenger newspaper.

The traditional tomb of Ponus, sachem of the Rippowams—a chief, historians say, whose domain included New Canaan, North Stamford and a large swath of Ridgefield—the rock itself had been given to the Historical Society by Charles Comstock (transported by oxen from his farm, on present-day Weed Street, to the spot where it has stood ever since).

According to documents on file with the member-supported Historical Society, the tomb’s timeworn inscriptions read (by side):

Historically, Ponus is the known as the sachem of Native Americans in the Stamford-Norwalk area when white settlers came in increasing numbers to the region in the 17th Century, making his permanent home on what we call Ponus Ridge and “his realm extending from the Fivemile River to the Mianus River in Greenwich,” according to a New Canaan Historical Society annual. Ponus, together with another chief, the Shippan Wascussue, in about 1640 sold to Nathaniel Turner of the New Haven colony wide tracts of land in this area.

One account of the tomb’s unveiling that’s on file at the New Canaan Historical Society—likely from the Oct. 4 or 5, 1897 issue of the Stamford Advocate, according to liner notes—says: “Those who expected to see an elaborate structure were disappointed, but upon reflection must have been convinced that nothing was more appropriate as a memorial to the Indian sagamore than the rough stone taken from what was once part of his domain.”

The ceremony itself included an opening prayer from the Rev. J.H. Hoyt of New Canaan, the unveiling, singing of “The Red, White and Blue” by the “school children of Ponus Street,” an historical address by the Rev. C.M. Selleck and the reading of Crandall’s original poem (sampled above)–the Advocate refers to him as “the Robert Burns of Ponus Street and the talented author of many bits of verse.”

Full copies of the poem and historical address are available in the file at the New Canaan Historical Society—here’s a snippet from the latter:

“While we to-day raise a monument to the departed, we also plant for the living a greater-girth memorial than that of mere person-recall. In other words, these rites not only perpetuate their subject’s name, but they stamp for posterity certain oblivion-rescued facts in his history, and, consequently, augment the world’s stock of information; which latter, we conceive, is the climax of the day’s ceremony.”

The monument in June 1966 was listed with the State Register of Historic Places, according to a survey inventory supplied by the agency.