Robin Gestal, vice president of the New Canaan Volunteer Ambulance Corps, was in midtown Manhattan on the morning of Sept. 11, 2001. 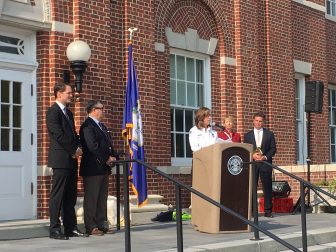 A safe distance from the World Trade Center, she made it home to her family that same day. 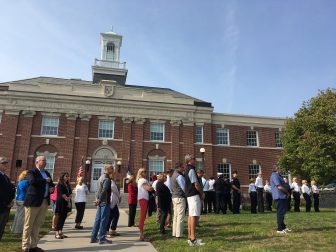 “They stopped the rigs and decided who would go. There was no hesitation by our members: Everyone wanted to help. But not everyone could go, because some members needed to stay behind to protect our town. Once our crews were across the bridge and into the city, they passed people on the side of the road who were silent, speechless and in shock. Temporary hospitals were set up and staffed, but no one came. There were virtually no survivors once the buildings came down. Just an enormous pile of rubble and twisted metal.”

In New Canaan, Gestal noted, stands a “memorial to remember that day” and “honor those who were lost.” 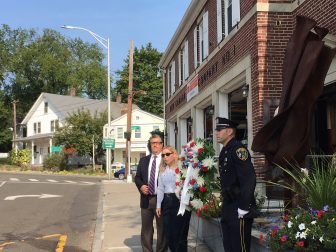 “This memorial rests in front of our fire station, right across the street,” she said, pointing toward the firehouse on Main Street. “It was designed and built by [Fire] Capt. Michael Socci. This memorial relic consists of six distinct components. The most prominent is the 16-foot twisted and torn column from World Trade Center building number one. It’s been determined that this piece of steel came from a core column just below the 100th floor. The base is shaped like a pentagon and its supports the steel. There are two lights shining toward the sky, representing the twin towers illuminating the American flag. And there is an urn of soil from the Shanksville, Pennsylvania crash site encased in the base. There are also four birds sculpted into the base, representing each of the four planes that crashed that day.”

About 70 people attended the short, dignified ceremony out front of Town Hall on a clear, crisp morning that, many remarked—as the crowd gathered ahead of the 9:59 a.m. start, the exact time that the South Tower collapsed—reminded everyone eerily of the very September day 16 years ago that more than 3,000 lives were lost. 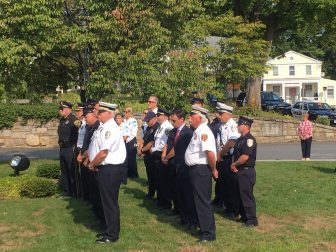 Attended by U.S. Rep. Jim Himes (D-Conn.) and led by Gestal, the Rev. Dr. Stephen Chapin Garner of the Congregational Church of New Canaan and First Selectman Rob Mallozzi, the approximately 20-minute ceremony included a stirring rendition of “God Bless America” by New Canaan singer Lisa Lynn Kirkpatrick, playing of “Amazing Grace” on bagpipes by Rob Knechtle and placement of a wreath at the 9/11 memorial in front of the firehouse by Mallozzi, EMT Bonnie Rumilly and New Canaan Police Department Officer Thomas Dewey.

Gestal in her remarks remembered by name each of the three New Canaan residents killed in the Sept. 11, 2001 terrorist attacks—Joseph Coppo, Brad Fetchet and Eamon McEneaney—and called the memorial “a powerful piece that evokes strong emotion.”

“It’s also especially poignant for me, as I worked at One World Trade Center for many years, and I worked on the 96th floor, right near to where that very piece of steel was located,” she said. 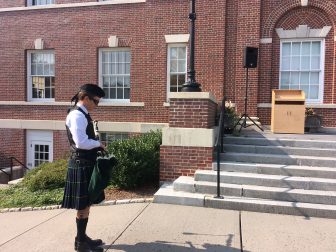 “Our community was deeply affected by the events of that day. Just about everyone in town lost a friend or a colleague. There were several places in town from where you could even see the fires burning. The horrific events of that day changed all of our lives and much has changed as it relates to emergency preparedness as well. It reinforced the need for a unified response and an organized and integrated profession to prepare the public for disasters. We now have a Department of Homeland Security and regular, mass-casualty incident drills. Our children, teachers and school administrators practice lockdown procedures. The town and schools have emergency preparedness plans for multiple scenarios. This all sounds scary and anxiety-producing, yet it is our new normal. Thankfully, we have a town which fully supports EMS, fire, police and the coordinated training of these three entities. I am proud to represent the New Canaan Volunteer Ambulance Corps and I know that each and every individual from of three branches has something very special in common and that is the desire to help people without hesitation. Helping other people sometimes puts our health at risk, but emergency workers don’t think that way.” 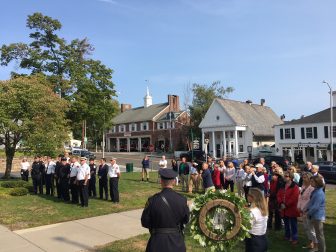 Mallozzi in his remarks noted that though the “husbands, fathers, coaches, teammates and dear, dear friends” lost in New Canaan in the Sept. 11 terrorist attacks “left a void in the lives of so many,” still “we all should be comforted to know that our community will never, ever forget them.”

“And on this day, like so many others, we never forget the first responders—those that ran toward the danger while others were running away,” he said. “It is more than appropriate that in New Canaan each Sept. 11, we gather here at the invitation of our emergency service volunteers and professionals—on a rotating basis, the New Canaan Volunteer Ambulance Corps, the Police and Fire Departments all organize and host this ceremony. Just another act of selfless service they provide to our community. Thank you.” 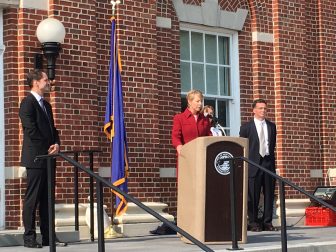 Garner in an opening prayer said that many in town “leaned on the words of Psalm 46 16 years ago to give us comfort and strength.”

“As I read them this morning, I thought how wonderfully appropriate, also, for members of our country who are struggling in the aftermath of Hurricanes Harvey and Irma. So I invite you on this day of memory and memorials to listen for the word of God: ‘God is our refuge and strength, a very present help in trouble. Therefore we will not fear, though the earth should change, though the mountains shake in the heart of the sea, though its waters roar and foam, though the mountains tremble with its tumult. There is a river whose streams make glad the city of God, the holy habitation of the most high. God is in the midst of the city. God is in the midst of the city—it shall not be moved. God will help the city when the morning dawns. The lord of hosts is with us, the God of Jacob is our refuge.’ Amen.”

Gestal in her address noted that the phrase ‘9/11’ “evokes a special meaning” for all Americans, “a memory of a moment in our history when the world as we knew it changed forever.”

“Each of us remembers exactly where we were and exactly what we were doing on that fateful day,” she said. “It is fitting that on every year on Sept. 11, Americans join together to honor the memory of the more than 3,000 people who died that day in New York City, Arlington, Virginia and Shanksville, Pennsylvania. Among those we lost were bankers and brokers, analysts and administrative assistants, technicians and tradesmen, pilots and flight attendants, vacationers and business travelers, mothers and fathers, firefighters, police officers, medics, family and friends. It is with deep respect that we remember the three members of our New Canaan community who were lost that day in New York: Joseph Coppo, Brad Fetchet and Eamon McEneaney. On that crisp and sunny September morning, a new reality was born to every American. And now, each fall, when the air begins to get crisp and the morning yields a bright blue sky, for so many of us it triggers the emotions and events of that infamous blue-sky morning 16 years ago.”

As the wreath was walked across Main Street and Knechtle played “Amazing Grace,” the fire bells in New Canaan tolled 5-5-5—a signal that used since the day of red fire alarm boxes and telegraphs to notify all stations of the loss of a firefighter.