Now more than ever, it takes both a special kind of business and business owner to succeed.

New Canaan has seen many stores open and close their doors, and among those a special few have stayed up and running while being loved by our town’s residents.

Chamber of Commerce Executive Director Tucker Murphy said New Canaan Music owner and town resident Phil Williams may be seen as a model for other businesses.

“For retail to survive in a town like New Canaan, it has to be about the experience,” Murphy said. “Phil has done just that.” 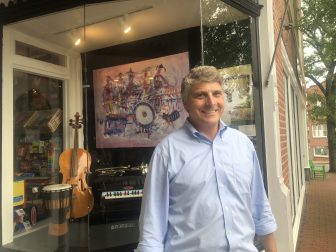 On June 27, Williams will be recognized as “Business of the Year” during the Chamber’s Annual Awards Luncheon. 10th anniversary in giving out awards to local business leaders. Other award winners include Waveny Park Conservancy (Golden Shovel) and Scott Hobbs, chairman of the New Canaan Housing Authority (Volunteer of the Year).

“Every year we ask for nominations from the Chamber board of directors,” Murphy said. “There’s always many great choices.”

Williams moved from “the alley” on Elm Street to Main Street last summer, and “it really all came together for him,” Murphy said.

“It’s a spot for music lessons while simultaneously being a retail front,” she said.

Asked about the recognition, Williams said it was an incredible honor just to be nominated, and it is particularly special because the store celebrates its fifth anniversary this year.

“We took a big leap of faith five years ago, but the town has truly embraced us,” he said.

For Williams, becoming a local business owner helped him feel at home in New Canaan culture like never before.

“I know what New Canaan is like, I’ve lived here since 2001,” Williams said. “But it wasn’t until I opened New Canaan Music that I truly felt a part of the fabric of the community.”

The Chamber’s Laura Budd describes a new community that developed here as a direct result of Williams’s endeavors.

“He’s created a musical hub in New Canaan,” she said. “A lot of what he brings to the table is community bonding.”

Williams said he is looking “onward and upward” toward the future and cannot wait to continue expanding.

“We want to just keep growing, adding and improving and just making the whole store better,” he said.

The 2018 Chamber Awards Luncheon is open to the public and will be held at Noon at South End Restaurant. More information is available here.