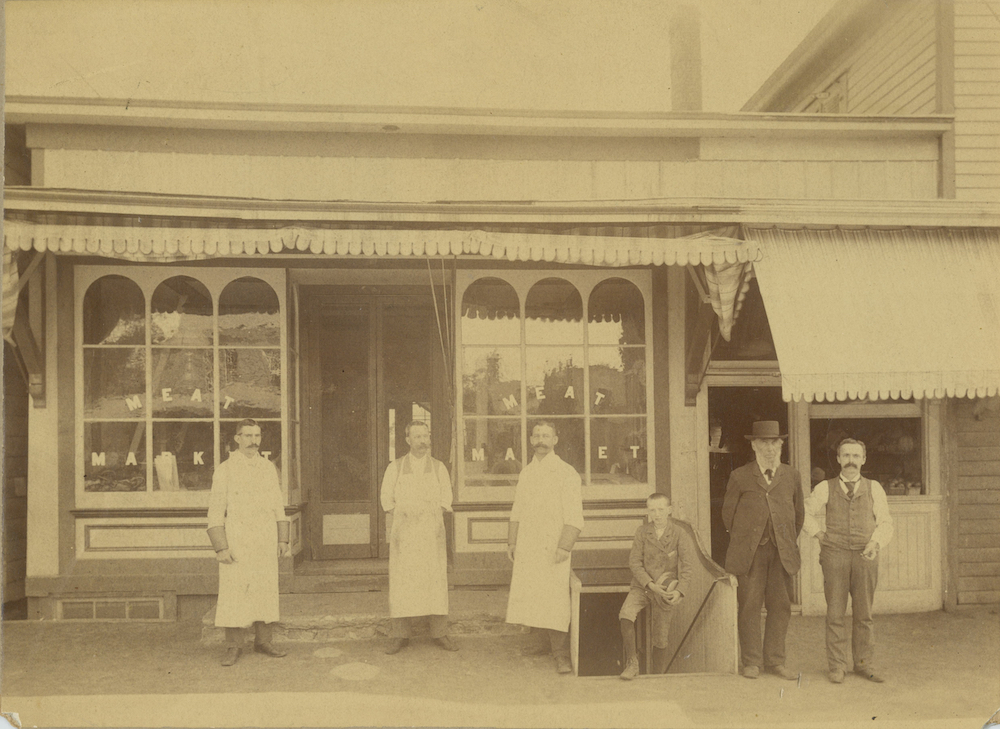 The quaint storefront of Bluemercury at 120 Main St. has been a place of commerce since its construction in the 1850s. The building was originally built by Sereno Ogden who was also responsible for the construction of the Vine Cottage (c. 1859).

The earliest known business to operate in this space was a meat market run by Samuel S. Crissy and various partners from 1868 to 1899. In February 1899, the east side of Main Street suffered a devastating fire during a blizzard. A handful of buildings were lost but luckily 120 Main was on the edge of this fire and managed to survive.

Perhaps due to the fire, Crissy’s meat market finally closed in 1899 and Louis Silverberg’s clothing store and F.C. Benger’s shoe store moved into the location. Benger operated on the lower level, which was probably accessible from the stairs the boy is standing on in the above picture. (This entrance was moved circa 1960 according to the records.) Silverberg closed his business in 1904 and Benger moved to another location in town. The space was then occupied by Coe’s Drug Store (also known as Central Pharmacy). John E. Coe and Dewitt R. Merritt were partners in this venture and remained in business until 1910 when they sold it to John V. Macaulay.

The first location of G.C. Murphy’s Five-and-Dime was 120 Main Street in 1924.  It stayed in this location until 1940 when Murphy built and moved to 51 Elm Street, which is now Ralph Lauren. 120 Main remained a place of commerce with tenants such as DeWitt’s Hardware and eventually became the location for Hilbert Bros. The business was run by Harry A. and N. Valdameer Hilbert and they specialized in antiques. The brothers, known as Harry and Val, opened for business in 1936 and moved to this location in 1950 (some documents suggest 1948). The location remained in the antique business even after the brothers had moved on, hosting a group of antique dealers known as New Canaan Antiques and the Main Street Cellar for many years. In November 2004, Milestones opened on the upper level.  It sold stationary and assisted with party rentals. Milestones closed this location in 2011 and moved to a smaller location in town. She-la-la opened on the lower level in 2012.