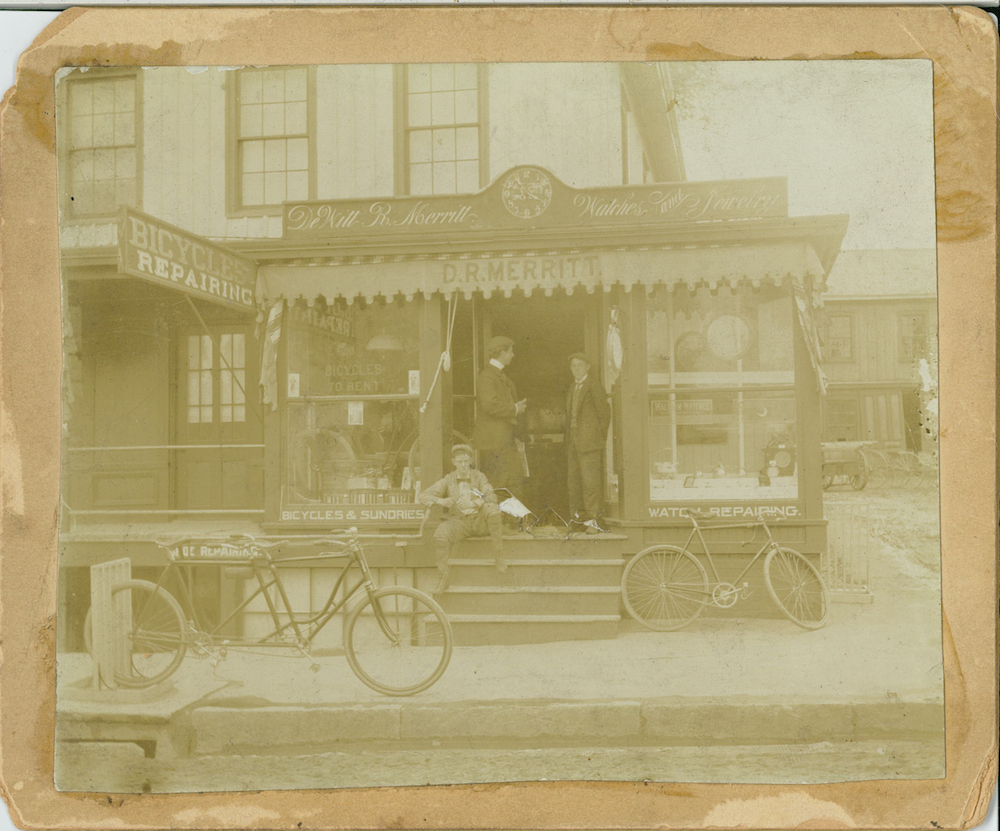 The photo taken in 1896 (at 3:55 p.m. according to the clock above the door) shows Dewitt R. Merritt, local businessman, at his location on 97 Main Street.

Mr. Merritt is the gentleman standing on the right side of the doorway.  Standing opposite is Alan Patterson.  The boy sitting on the steps is Benjamin F. Weed who was about 14 at the time.

Mr. Merritt had opened up his jewelry store in 1895, only a year before the photo was taken.  Never seeming to be happy with just selling jewelry and watches, in 1896, he opened the Merritt Cycle Company.  This aspect of the business did not last very long and by 1900 he seems to have merged the bike company into his jewelry business.

Mr. Merritt  always seemed to have a head for trends and was always selling new products.   In 1910 he ran an ad for his store and services which included selling Edison phonographs and wax cylinder records.  This same ad advertised that he was selling Kodak cameras and could develop the film.  Mr. Merritt could have been one of the first car salesmen in New Canaan when he became an agent for the Northern Manufacturing Company some time in 1904.  He bought one for himself, and sold at least three Northerns to local residents, including C. E. T. Fairty.  Fairy’s 1904 Northern is still owned by his family and is the oldest car to have been originally registered in New Canaan.

D.R. Merritt was a committed member of the community.  He served as Treasurer of the Commodore Perry Council in 1911, and hosted various political events at his home.  In March 1916, Merritt constructed a large and attractive street clock in front of his store on Main Street.  He built the entire clock himself except for the movement which he purchased from Seth Thomas and Company.  He wanted all New Canaanites to know the time of day.  The clock was unfortunately destroyed in 1925 when a truck with a wide load accidentally clipped it.

The building in the photo was demolished sometime in 1940 and the current building at 97 Main Street was built the same year.