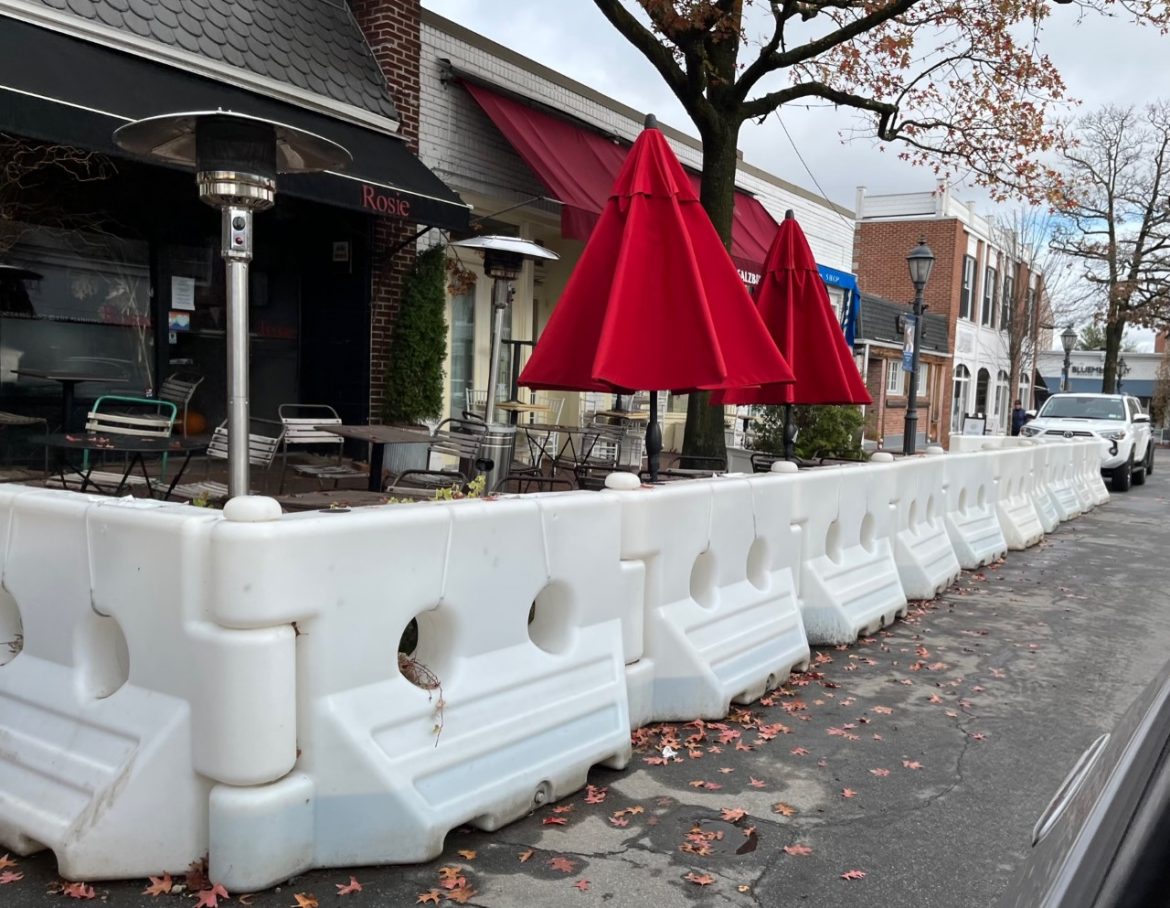 Town officials say they’re deciding whether to extend the wider sidewalks on Elm Street all the way from Main to Park Street on the north side.

New Canaan, like other towns, saw the popularity of outdoor dining rise during the height of the COVID-19 pandemic, and officials have said the “bumpout” already in place from South Avenue to The Playhouse appears to be serving the downtown well.

“Should we look at having a ‘continual bumpout,’ so to speak, on Elm Street?” Selectmen Nick Williams said Tuesday during the Board of Selectmen meeting. “I could see it extending all the way on the north side of the street.”

“There also is the possibility of stopping at the alleyway or the driveway next to Chef Luis and allowing some parking there,” Mann said.

By going “end-to-end” on Elm, the street would lose about 23 parking spaces, though it could gain five back between the alleyway and Park Street, and could gain another two parallel parking spaces, including one disabled space, on the north side of Elm Street just west of Main by keeping the sidewalk at its current width there.

If the town wants to go in that direction, Mann said, Public Works would need to go back before various municipal bodies in order to get approvals.

As it stands, the town has approved bumpouts on the south side of Elm Street near Dolce as well as on the southeast corner of South and Elm—future home of a relocated Dunkin Donuts. (Counterintuitively, the bumpout at that intersection will gain angled parking spaces back for the town, because by shortening the crosswalk across Elm it will not be subject to a state law regarding a 25-foot “no parking” setback.)

Mann noted that the wider sidewalks not only increase outdoor dining options but also pedestrian safety in the heart of the downtown.

Williams asked whether it would make sense, if New Canaan pursues a plan to extend the bumpouts, to create wayfinding signs for motorists seeking to park—for example, directing them to the Park Street and Playhouse Lots located behind Elm.

Mann said the town is already looking to create a pedestrian ramp that will make it easier to get from the Playhouse Lot down to the alley that runs alongside LPQ.

“So in essence if we were to provide some wayfinding signage to say, ‘Hey, additional parking in the rear,’ we think a lot of people will probably utilize that now if there was a nicer access way,” Mann said.

He added, “If you add some wayfinding signage it would lessen the blow of someone finding a space on Elm itself, but the overall gain would be the increased sidewalk and increased walkability and safety thereof.”

The discussion came as the selectmen voted in favor of a measure regarding outdoor dining this winter.

Because the town is legally required to preserve an unobstructed four-foot pedestrian way—and cannot, following a complaint of Americans with Disabilities Act violations filed in the summer of 2021, funnel pedestrians into the street, even if they’re protected by barriers—restaurants have had the option to set up tables in the barricade-protected areas of Elm Street itself, rather than on the sidewalk.

Yet following the selectmen’s vote, those barricades will be removed on the Tuesday after Thanksgiving, officials said, with a plan to reinstall them in mid-March. For that interim period, restaurants that want to offer outdoor dining may do so, so long as they’re providing the four-foot-wide pedestrian access on the sidewalk. The change “will free up some additional parking for the merchants themselves through the holiday season,” Mann said.

Williams, along with First Selectman Kevin Moynihan and Selectman Kathleen Corbet, voted in favor of the plan 3-0.