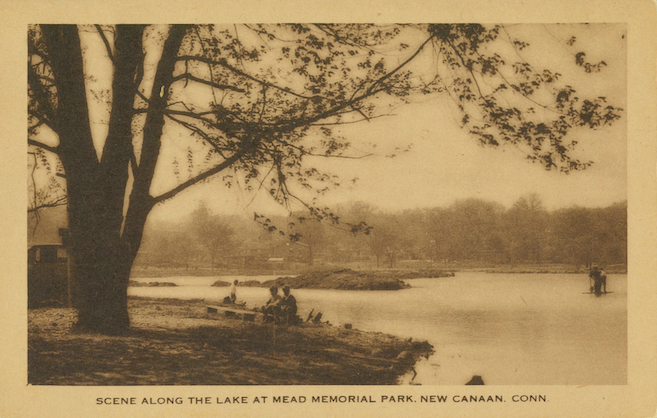 On April 12, 1915, Florence Heath Mead, wife of Benjamin P. Mead, donated “18 acres, more or less,” to the town of New Canaan. There were a few stipulations: (1) that the property “shall be known as the ‘Mead Memorial Park”; (2) that its only use could be as a park; (3) parts of the park could only be sold to the New Haven & Hartford Railroad Company or its successors; and (4) that $300 be set aside for maintenance and improvements.

Benjamin Mead had been a very active member of the town.  He first moved to New Canaan in 1873 to manage a general store located on Main Street where Chase Bank is today.  He later went on to be town clerk, first selectman, legislator, senator, and state comptroller.  He apparently never lost an election.  He died in 1913.

Looking to memorialize him, Mead’s friends suggested donating land that Benjamin had purchased in 1895 from the Rockwells.  A former cranberry bog and a cornfield, it had been a gravel pit under Mead’s ownership.  By 1915, gravel had been extracted and local residents used the land as a dump.  The proposed donation of the land caused an uproar in town.  A town hall meeting on the subject attracted some 350 residents.  While the attendees were waiting outside for the meeting to begin, they debated the pros and cons of accepting the gift, including the tax burden and that the land would be “another sewer bed for a playground site.”  But despite these objections, the land gift was accepted in a 136 to 110 vote.

Not too much was done with the park in the first few years.  The first goals were to build a ballfield and a skating pond.  The field was measured out, but it took until 1920 before there was something resembling a baseball field in the park. The skating pond was a much easier task it seems.  The small pond was cleared of bushes and trees, a small dam was erected, and there was skating on the pond during the first winter.

During WW I, the park was basically ignored.  Brush once again filled the pond and people started to use it as a dump again.

Then in 1925, the park was threatened because Stamford High School decided that it would no longer accept New Canaan students.   Without a high school of its own, New Canaan a considered a proposal to build a school in the park where the tennis courts are currently located.  The proposal failed.

The Mead Park of today was created during the Great Depression with funds from the Work Progress Administration.  The pond was dredged and expanded with two artificial islands that still remain.  A child’s wading pool surrounded by a colonnade was added some time in the early 1930s.   (The pool was filled in during World War II to create a Victory Garden and never uncovered.)  The entrance arch, created by Harold Mead, was dedicated in the summer of 1935.  Trees and shrubs were planted – an inventory done of the park from 1947 showed that there were 943 shrubs and 1,488 trees in the park.  All told, the WPA and other federal programs spent approximately $100,000 to improve the park during the Depression.

In 1944, the Garden Club began planting the Gold Star Walk, a memorial to the 38 residents of New Canaan who lost their lives while serving during WWII.   Over the years, the walk and bridges have been restored, most recently in 2017 by longtime resident Jim Bach.  A bench to honor Bach and a bench to honor the architect Laszlo Papp are also part of the park’s glory.