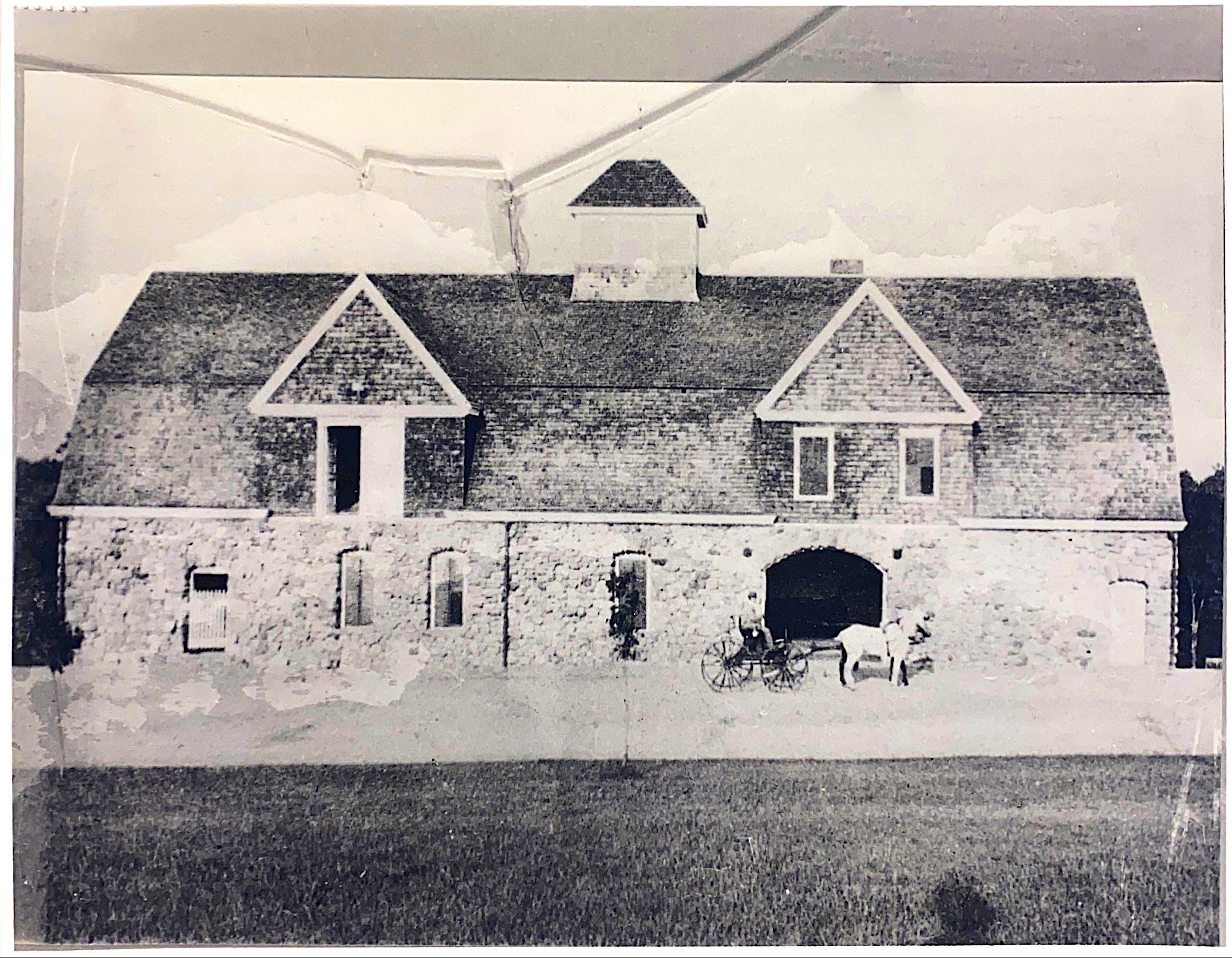 The Carriage Barn Arts Center located in Waveny Park harkens back to the estate originally built by Thomas Hall. Hall purchased the property in 1895 and called it “Prospect Farm,” named for his previous  summer home located at 27 Prospect Street in Stamford.  Hall didn’t use an architect to design the Carriage Barn or other outbuildings.  Instead, he worked with his builder, Frank Shea.

The barn was designed so that eight driving horses, a saddle horse and a pony named Cricket could comfortably fit.  There was even room for Hall’s business wagon, his wife’s phaeton, his son’s Irish donkey cart complete with an Irish donkey, and two more wagons.  Above the stables were apartments for the coachmen and grooms.  The cupola of the barn became a sort of playhouse for the youngest Hall children, Tom and Ellenor.  One story goes that the children wanted a better view from the cupola so they sawed a hole in the wall.  A few days later at lunch, Mr. Hall announced that he was going to inspect the farm.  Tom and Ellenor quickly excused themselves and ran to the cupola.  Their father was blissfully unaware that his two youngest were holding up the section of wall they had removed as he toured his property.  Unfortunately, their work was discovered by the foreman, who reprimanded them. Eventually, though, a playhouse was built.

Thomas Hall worked as a leather merchant.  During a merger with several other leather companies, he started work with Lewis Lapham.  Hall sold the property to Lapham in 1904, which he named Waveny after a river near the ancestral home of the Laphams in England.  The main house, despite it only being eighteen years old, was torn down in 1914 for the “castle” we are all now familiar with.  The carriage house was not replaced but it was remodeled in 1913 after the roof of the barn caught fire.  No one was injured and all the horses and carriages were saved.  The only casualties were some unused wedding presents belonging to Jack Lapham, the son of Lewis Lapham, and his wife.  When the roof was rebuilt,  the design was altered to vreate the roofline that exists today.  Sadly, though, during this work, a worker on the roof slipped and fell to his death.  Because fire remained a concern, in the 1960s Ruth Lapham Lloyd, the daughter of Lewis Lapham and the woman who gifted  Waveny to the town, purchased a fire engine that was kept in the basement of the barn.  Most of the fires on the property were caused by Ruth, who smoked and even set fire to her bedroom with a cigarette.  And despite having its own fire fighting equipment, the fire department had to be called when a fire started in the basement of the barn, which destroyed the engine stored there.

After the 1913 fire, the interior of the barn was restructured so that there was an apartment for the coachman and later head chauffeur. The chauffeur was an avid gardener who kept a garden in the courtyard just outside his front door.  It was perhaps during this time that the Carriage Barn was used as a garage and the Lapham family’s electric car was stored there.  It is described as being “a delightful glass cage on wheels” that had a top speed of about 15 mph.  Antoinette, Lewis Lapham’s wife, frequently watched her son’s polo matches that were held on the estate from this electric car.  During World War II, the barn was used as the Civil Defense Headquarters for New Canaan. When the barn was being renovated in the 1970s equipment such as splints and stretchers were found from this time period.   Also during the war, a pen was built directly behind the barn to hold sheep.  These sheep replaced the groundskeepers who went off to fight in the war.  The sheep were allowed to freely roam the property and keep the grass low.  Unfortunately, Mrs. Lloyd had to sell the sheep after the war because local dogs would come and harass the herd.  They even killed a few sheep.

When Waveny was given to the town in 1967, the Carriage Barn was basically forgotten.  It became a storage place for both the Board of Education and the Recreation Department.  The only frequent visitors were local kids, who kicked out the basement windows to get in, and used it as a hang out spot.

In the early 1970s, the history of the barn changed. Jan Fenton found a sign in her attic in the shape of an arrow with N.C.S.A. painted on it.  After some research it was discovered that this sign was used by the then defunct New Canaan Society of Artists; Jan’s builder, Augustus Gerdes, had been a member.  Jan wanted to reestablish this group, now called the New Canaan Society of the Arts, and thought the rundown stone barn would be the perfect location.  In 1977, Ruth Lloyd gave the Society $1500, and renovation work began on the interior just three weeks before the first exhibition was to open.  Mrs. Lloyd was more concerned with the appearance of the building than in making an art center in New Canaan.  While not fully completed the art show went off without a hitch. Over the next year, work continued – done mostly by volunteers.   Close to $100,000 of donated labor, money, and materials went into the Carriage Barn Renovation.

One thought on “New Canaan Now & Then: The Carriage Barn ”