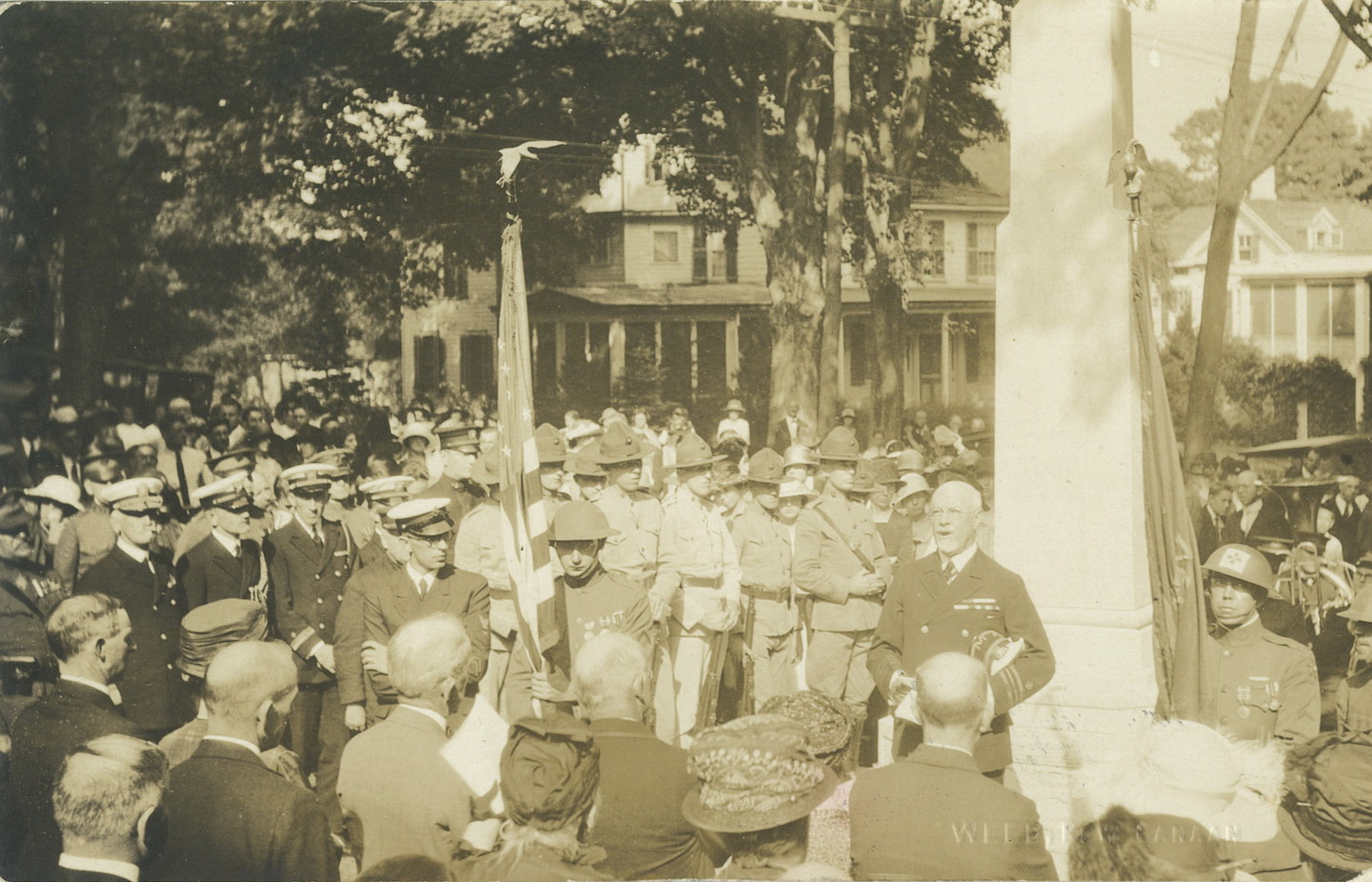 Earlier this week, Tucker Murphy, the Town’s Chief Administrative Officer, asked where the time capsule buried near the Wayside Cross was located. Searching through the New Canaan Museum & Historical Society’s records, we discovered that a time capsule was buried during the Town’s 200th anniversary held on September 29th, 2001.

Because the Museum still had the VHS of this celebration, and a TV with a built-in VHS player, too, we could watch the events from 2001.  The ceremonies were held just weeks after 9/11, and many of the patriotic speeches reflected the town’s sense of loss and grieving.  The burial of the time capsule at God’s Acre received a relatively short mention, and the location remained unclear.

However, with some sleuthing and additional research, we were able to identify that this time capsule was buried a few feet behind Wayside Cross in a carefully constructed hole lined with plywood and gravel.  The capsule, which is meant to be unearthed in 2051 for the Town’s 250th anniversary, holds fifty items including dance tickets to the New Canaan High School, a map of the Town and its parking lots, a telephone book, and newspaper clippings about the World Trade Center disaster.

The real mystery, and what it turned out Tucker wanted, was a 1923 time capsule.  A few weeks before the 200th anniversary celebrations, work began to find this time capsule.  Its burial had been recorded in the May 31, 1923 edition of the Advertiser.  The ground around the Wayside Cross was thoroughly turned over, but eventually it was given up for lost.

Thanks to this article, and some current day research, we now know the location of this 1923 time capsule.  The April 12, 1923 edition of the Advertiser states “the coffer will be lowered into the concrete foundation….”  (Rereading the May 31 edition, it does mention that the coffer was lowered into the foundation during Memorial Day celebrations.)  Unfortunately, there is no information on how the coffer was sealed in the foundation.  There is no mention of pouring concrete, lowering it into the wet concrete, or how it was sealed.  Therefore, it seems likely that the coffer is in its own chamber as there was originally a plan to drape the bronze coffer with an American flag.

It is also of note that General John Thompson, the inventor of the Thompson submachine gun, gave a speech during the 1923 Memorial Day celebration.  Thompson and his wife first lived on Bank Street and later Brinkerhoff Avenue beginning in 1919.  Also at this 1923 celebration was the dedication of the cannon that stands outside Town Hall.  The cannon, most likely a Blakely rifle, was originally located on Governor’s Island in New York City and protected the city during the Civil War.

When we wrote about the Wayside Cross in an earlier Then & Now article, we didn’t realize there had been two dedication ceremonies – the first on May 30, 1923, and the second on September 9 of the same year when the cross was finished.  The first ceremony took place on Memorial Day because the Town needed funds for the completion of the project.  Work on the base was about to begin and workers were well on their way on carving the cross.  A decision was made to generate interest – and possible donations – by filling a “bronze coffer” with items for future generations to find.  The contents are as follows:

* – The contents of all three of these letters were printed in the May 31, 1923 Advertiser

† – The borough here refers to the borough of New Canaan, which was located generally in today’s downtown area.  The borough and the town were separated in 1889 and consolidated in 1935.  For more information on the borough see the April 21, 2022 edition of this series.

‡ – High schools such as Stamford High, King, and Laurelton are listed here because New Canaan did not have its own high school until 1927 and New Canaan high school students were spread out between these three schools.

– The first edition of the Advertiser was published on July 25, 1908 and was two pages long.  The latest edition would have been printed on May 24, 1923, which was twelve pages long.