In one of the trophy cases in the lobby of New Canaan High School’s Athletic Complex is a scuffed, vintage Spalding basketball, marked with a simple inscription: 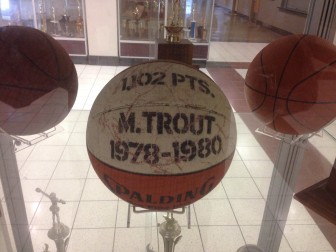 The ball is a simple, but poignant reminder of New Canaan’s glorious past, also serving as an inspiration to future Rams of what can be attained through hard work, dedication and the full realization of one’s talents. It represents one of New Canaan High School’s brightest basketball stars—the third facet of New Canaan’s hardwood Holy Trinity. First, there was Wilky Gilmore. Then there was Gary Liberatore.

And last, but not least, there was Monroe Trout.

As a freshman at NCHS, Trout played for the varsity tennis team and the freshman basketball team, thereafter opting to focus on basketball. As a sophomore through senior, Trout was the starting center for the Rams basketball teams that won three consecutive FCIAC Eastern Division titles as a member of the vaunted “House of Usher”, so-named for the Rams’ head coach Don Usher.

As a senior in the 1979-1980 season, Trout was co-captain of the Rams team that won its region of the State tournament, ultimately falling to Wilbur Cross by three points in the Connecticut State LL championship game. The 1979-1980 Rams finished with a 24-4 record, losing no game by more than three points, and winning their 24 games by an average margin of over 17 points.

During the regular season, the 1980 Rams beat the eventual Class L champions, East Haven, and also defeated Class M state runner-up, Notre Dame, twice. The Rams avenged all but their loss to Wilbur Cross with subsequent victories by larger margins. Perhaps most importantly, the Rams beat Darien by a score of 74–32. After the season, Trout was named first team all FCIAC and first team all-state Class LL.

While at New Canaan High School, he was a National Merit Scholar, a finalist for Presidential Scholar, and the recipient of the NCHS 1980 Harold S. Kenney Scholar/Athlete Award.

Trout went on to play four years of varsity basketball for Harvard, being named co-captain in his senior season, 1983-1984. Trout set, and currently holds, the Harvard all-time school records for field-goal percentage for a season and for a career.

As a junior, Trout received the New England Academic Award for Division 1 Basketball and was named an Honorable Mention Academic All-American by the College Sports Information Directors of America.

In his senior year, Trout was a member of the Harvard team that set, and still holds, the NCAA all-time record for team free-throw percentage for a season, shooting 82.2% as a team for the year.

The New Canaan Old Timers celebration runs from 10am to 3pm on Sunday September 20th, and includes a continental breakfast and lunch. The cost is $50 for adults, $20 for students. Proceeds from the event go toward the Vin Iovino Scholarship, named for the former NCHS athletic director and presented to selected senior athletes at the annual sports picnic and award ceremony held at the end of every school year.