New Canaan Police on Friday launched a free, downloadable smartphone app that allows residents to submit tips with photos, commend or otherwise provide feedback on an officer, ask questions and access the department’s own social media feeds (here they are on Twitter, here on Facebook). 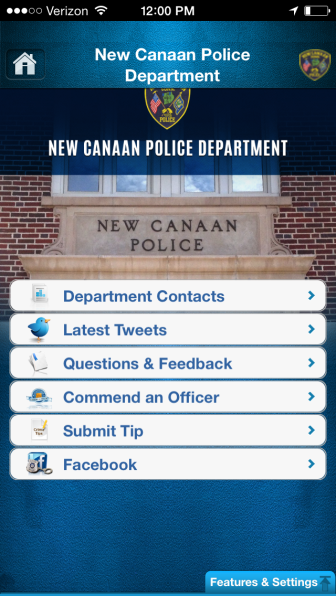 Here’s the main menu in the new app from New Canaan Police. It’s not for emergencies.

The “My Police Department” app also can be configured to auto-send notifications to subscribers via iPhone and Android. The app also can be downloaded to tablets such as iPads. To get the app, go to your smartphones app store and search for “MyPD”—it’s the first return. After the app is downloaded, select “Country” (US), “State” (Connecticut) and “City” (New Canaan), then click where it says “New Canaan Police Department” at the top of the screen. The app will save your settings. (The push notification system doesn’t appear to be working right now, but you can still get the app and it functions.)

New Canaan Police Chief Leon Krolikowski said in a press release that the app marks yet another way to open up lines of communication between the department and residents. 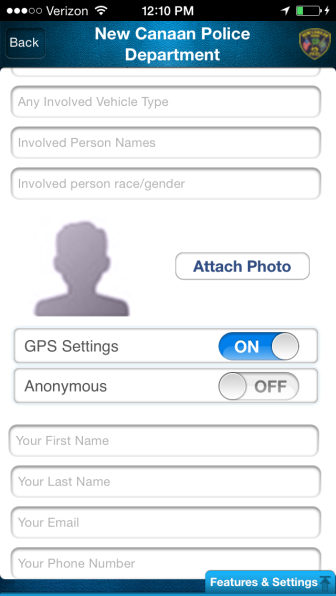 With the new “MyPD” app from the New Canaan Police Department, users may submit tips including photos. The app is not to be used for emergencies.

“No one knows our community better than our citizens and we rely upon them to help keep us informed as we work as partners,” he said in a press release.

The app is not to be used for emergencies, he said.

“The use of smartphones has become ubiquitous,” he added. “We have a responsibility to embrace technology so as to exceed the service needs and expectations of the town residents we are sworn to protect and serve.”

The “MyPD” app, already in place in Greenwich, Westport and West Haven, appears user-friendly and intuitive.

For example, under “Department Contacts” the chief of police is listed and tapping his email address opens the smartphone’s mobile email with a ready, blank message for Krolikowski himself.

The “Submit a Tip” section (which has a note at the bottom, “Not for Emergency Use”) includes the following default categories: Traffic Concerns, Drug Activity, Vandalism/Graffiti and Other Concerns. 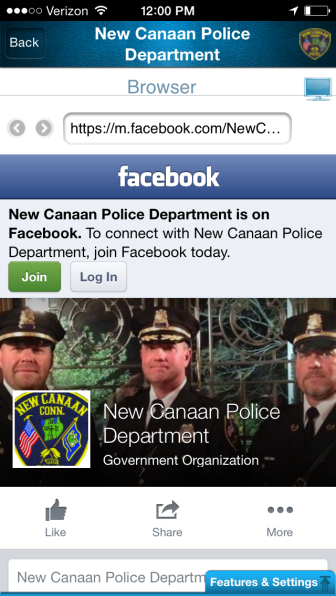 L-R: Capt. John DiFederico, Chief Leon Krolikowski and Capt. Vincent DeMaio of the New Canaan Police Department. The banner from NCPD Facebook page can be seen from the new MyPD app, available free for download in the App Store. The app is not to be used for emergencies.

It has a section where users may upload a photo to go with their tip—functionality that opens up interesting possibilities. Earlier this year, for example, a problem emerged at Lakeview Cemetery where irresponsible dog owners had their pets off-leash and those animals were defecating on gravestones. The problem un unpicked-up dog waste was pushed out to nearby streets when the cemetery became off-limits. Officers said at the time that police would issue tickets to offenders based on photographic evidence from tipsters (though in that case, those reporting the problems would also need to come into NCPD in person, officials said).

Users of the app can switch GPS on or off to make it easier to fill out location fields in the various menus.

“While all of the contact forms can be sent anonymously to the department, we encourage providing an email address or phone number to permit a direct response,” the press release says. “The ability to include a photograph and/or GPS location tag with submissions further increases the app’s functionality (for example to better explain a parking issue or identify a graffiti complaint).”

The app is developed by Wired Blue LLC—more information here—and can be downloaded by going to the Android marketplace or Apple’s App Store and searching for “MyPD.”

One thought on “New Canaan Police App: How To Get and Use It”